Women’s T20 World Cup: A walk through the International Cricket Hall of Fame in Australia

There is no better place to know all about cricket than the Bradman Museum and International Cricket Hall of Fame housed in the rural town of Bowral in New South Wales.

In 1334, cricket evolved from a game developed by the shepherds in southern England to pass time while guarding their sheep. The word ‘cricket’ was  first mentioned in a court document dated January 16, 1598, when a John Derrick, a 59-year old coroner, attested that  “hee and diverse of his fellows did runne and play (on the common land) at creckett and other plaies.”

Thereafter, not only the spelling, even the game of cricket changed. There is no better place to know all about cricket than the Bradman Museum and International Cricket Hall of Fame housed in the rural town of Bowral in New South Wales (Australia).

As two women’s teams sweat it out for the T20 World Cup trophy on March 8, here’s a walk through the International Cricket Hall of Fame. 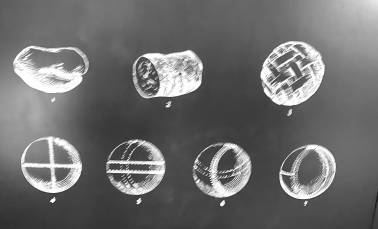 From stone to ball

The earliest form of cricket used small rounded stones. They were replaced with wooden balls which were lighter to throw. In 1650s, wooden balls with leather sections appeared. Later, the wooden cores were replaced by cork covered in wool strands. In 1774, the Laws standardised the weight of the ball; in 1775, the first six-seamed ball was made by specialist manufacturer Dukes. In 1838, the circumference of the ball was established at 9 and 9 and 1/2 inches, which was changed to 8 13/16 and 9 inches in 1927. 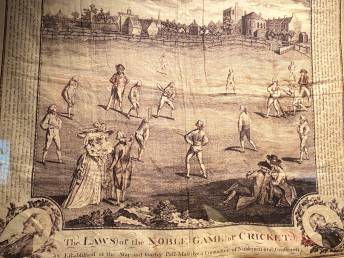 The handkerchief depicts a game of cricket in White Conduit Club (Islington, London). It has Laws of the game printed on each side, with portraits of supporting aristocrats and dignitaries in each corner. In 1782, White Conduit Club assumed responsibilities of the Laws. In 1787, The Club members merged with Marylebone Cricket Club which was to influence cricket for the next 200 years. 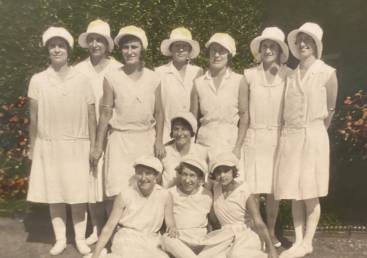 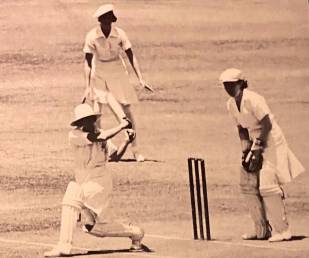 In 1934-35, the Australian Women’s Cricket Club invited England to play a series of matches including three Tests. In 1937, the Australian team embarked on their overseas tour playing in England and Holland under the captaincy of Margaret Peden. Both tours laid the foundation for the growth, development and acceptance of women’s cricket.

The International Cricket Hall of Fame will soon have a separate gallery for women’s cricket. Here, a few artefacts sit behind glass panes, including the official souvenir of English women cricketers’ tour of Australia in 1958 which was published by Australian Women’s Cricket Council. 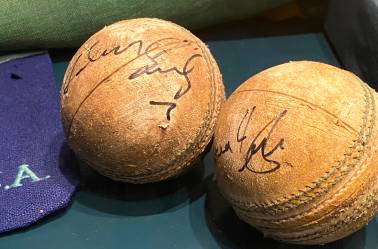 Signed by India’s fast bowler Jhulan Goswami, this ball was used in a practice match held on Bradman Oval on October 26, 2008, between India and Under 23 Australian Women’s side. 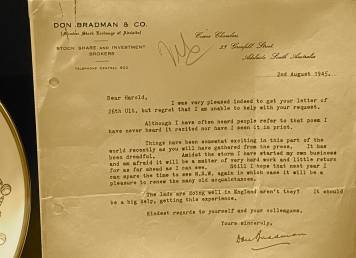 A letter by Sir Donald Bradman:

Dated August 2, 1945, in this letter Sir Donald Bradman talks of having started his own business and “am afraid it will be a matter of very hard work and little return as far ahead as I can see.”

Located in Bowral, Bradman Museum & International Cricket Hall of Fame is a nearly 90-minute drive from Sydney; a train ride from Sydney takes about 2.20 hours; the museum is a 20-minute walk from the Bowral train station.

The Bradman Museum and International Cricket Hall of Fame is open daily, from 10 am to 5 pm, except Good Friday and Christmas Day. Free tours are available with 24-hour notice. Tickets: General admission (adults): $20; children: $11. Purchase tickets online at www.internationalcrickethall.com