IPL 2018: Hyderabad vs Mumbai is a battle of the heavyweights

Defending champions Mumbai Indians and Sunrisers Hyderabad will lock horns tonight aiming to prove their credentials and assure their fans of their might as they look to have another crack at the title.

Two of the strongest teams of IPL11 will lock horns tonight aiming to prove their credentials and assure fans of their might as they look to have another crack at the title.

Head-to-head: Both teams are evenly matched with five wins each in 10 meetings. Hyderabad, though, hold a slender 3-2 advantage not only at their home ground, but also in their last five matches against MI.

For Mumbai Indians (MI): It is still early days and Rohit Sharma and company are renowned for their late charge.

They have not won their opening matches in last six seasons but have won the title thrice. Yet, they would like to open their win account in Hyderabad, a happy hunting ground last season, where they clinched their third IPL crown with a thrilling one-run victory against Pune Supergiants. For Sunrisers Hyderabad (SRH): After the first round of action, they look like the team to beat as they appear to possess a robust batting lineup backed by an equally strong bowling unit. They have a solid bench strength as well. A victory against Mumbai will enhance their status as serious contenders and help the 2016 champions gear up for an encore. 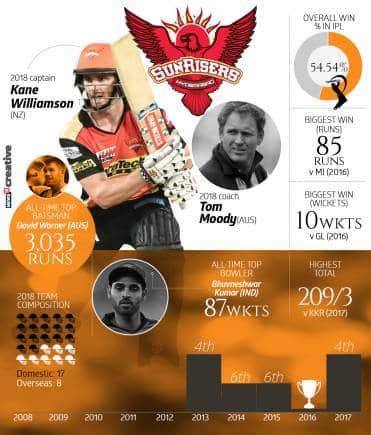 Rohit Sharma: The Mumbai captain has a fantastic record at this venue having notched 429 runs in 13 matches at a fabulous strike rate of 144. He will be up against the most potent bowling attack in the league and a good score against them will spur the Mumbai star to lead from the front once again.

Rashid Khan: At 19 years, Afghanistan's first IPL millionaire is already a limited-overs sensation. If he is not tying batsmen in knots with his leg-breaks and googlies, he is throwing himself at the ball to deny the runs. He can also use the long handle to good effect. Overall, an ideal T20 all-rounder who can cause havoc in opposition ranks.

Mumbai are recovering from a heart-breaking loss against Chennai Super Kings at home. Barring the last three overs when Dwyane Bravo stole the thunder, they had done everything right to keep the opposition down. Fast bowler Pat Cummins' being ruled out of the season with a back injury and all-rounder Hardik Pandya missing training owing to an ankle niggle is not the right preparation for a tough contest.

Hyderabad have no injury worries but they will be tempted to try out their overseas stars top order batsman Alex Hales or all-rounder Carlos Brathwaite in their first home match of the season. But that would mean changing a combination that did exceedingly well in their opener against Rajasthan Royals. Brathwaite for pacer Billy Stanlake appears to be the only possibility as the rest of the batting order was not tested in their first match.

Tom Moody, Hyderabad head coach: “We feel Wriddhiman is a very dangerous top-order player. Not only is he comfortably the best ‘keeper in the country but we feel at the top of the order in T20 cricket his record is good. He is a good right hand option for us as an impact player upfront. We are looking at a couple of options, yes, but we are reluctant to make too many changes for obvious reasons. We would also like to make sure that we have got the right match-ups for the game against Mumbai."

Rohit Sharma, Mumbai captain: I think our team composition is very good. One win or one loss does not define any team, we have to play consistently throughout the tournament and that is what we are aiming at. There were a lot of positives (from the opening against Chennai), especially Mayank Markande. He was courageous enough to come and bowl at situation. He flighted the ball well, which is always ideal for a captain to watch a leg spinner flight a ball and looking for wickets in the middle overs.

30,000 and growing: Mayank Markande's following on Instagram after his exploits against Chennai. Before the game, he had just 2500 followers!