Upcoming Webinar:Innovate Your Future at India Inc. on the Move on August 26 and 27, 2021 at 10am, with Rockwell Automation
you are here: HomeNewscoronavirus

The under-investment in the healthcare infrastructure has never been more telling than it is now.

The demand for government-run hospitals rises when the course of treatment requires hospitalisation, mostly due to the affordability factor

The under-investment in the healthcare infrastructure has never been more telling than it is now. Surveys conducted by the government have shown that the private sector doctors and hospitals treat more ailments and patients in normal times than the public health centres and hospitals.

This is in sharp contrast to countries with robust healthcare infrastructure where a majority of patients visit public hospitals for common ailments as well as those requiring the attention of specialists and super-specialists.

The preference for private doctors for the treatment of ailments can be seen both in the rural and urban areas across India. The demand for government-run hospitals rises when the course of treatment requires hospitalisation, mostly due to the affordability factor.

Yet, government-run or public institutions accounted for just about an estimated 42% of all hospitalisation cases, a survey of consumption and expenditure on health in 2017-18 by the National Statistical Office found. That is the last such nationwide survey on healthcare expenditure for which the data is in the public domain.

The Visits To A Govt Hospital

The preference to see doctors in the private sector for ailments were mostly an outcome of the disappointing experiences at the primary healthcare centres, particularly in rural areas, where many are understaffed or doctors and other healthcare workers are absent or disinterested in their work. According to the 2017-18 survey, less than one-third of all ailments of rural households were treated in government and public hospitals and the corresponding share for urban households was lower at a little more than one-quarter. 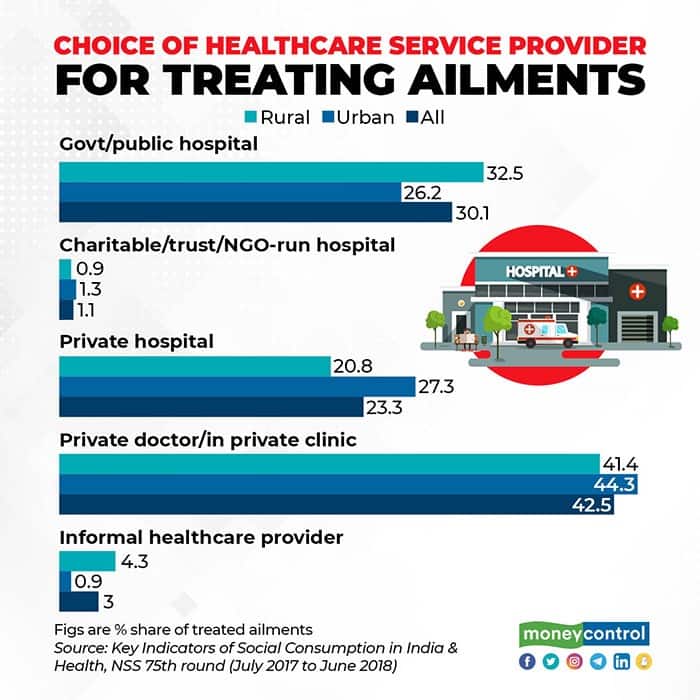 There are large regional differences to this behaviour. Visits to government and public hospitals for out-patient and in-patient treatment are higher in states and union territories where successive state governments focussed on investing in improving the quality of health infrastructure.

In Kerala, where successive governments prioritised spending on health and education for years, about 52% of the ailments reported from rural areas and 42% from the urban areas were treated by doctors at the government hospitals.

In sharp contrast are the more populous states of Uttar Pradesh and Bihar, where massive investment is required in public healthcare. Only a small proportion of ailments were treated by public or government hospitals in these states.

In Uttar Pradesh, just about 14% of the ailments across rural and urban areas were seen and treated by doctors in the public sector for treatment. In Bihar, about 18% for the rural households and 23% for the urban households. 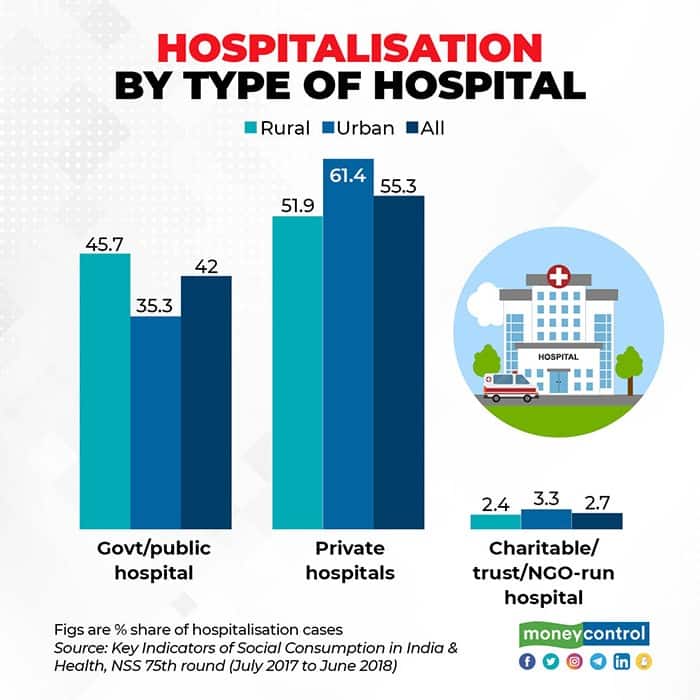 Dependence on the public sector hospitals was the highest in Jammu and Kashmir during the period of the survey, accounting for over 95% of hospitalisation in rural areas and 78% in urban areas. Nearly three-fourths of all hospitalisation in Himachal Pradesh were in government-run institutions. The share of government hospitals for in-patient treatment was high in West Bengal too.

Maharashtra, Uttar Pradesh and Telangana were a study in contrast, with just about a quarter of the hospitalised treatment provided by the public sector hospitals. Andhra Pradesh and Punjab did not do much better either.

Hospitalisation costs in the private sector were 5-7 times more in the government hospitals, forcing people to sometimes borrow from family and friends or take a loan and even liquidate some of their assets. The cost of treatment in private hospitals are pushed up by higher charges for the treatment package, doctor/surgeon’s fee and bed charges the most. 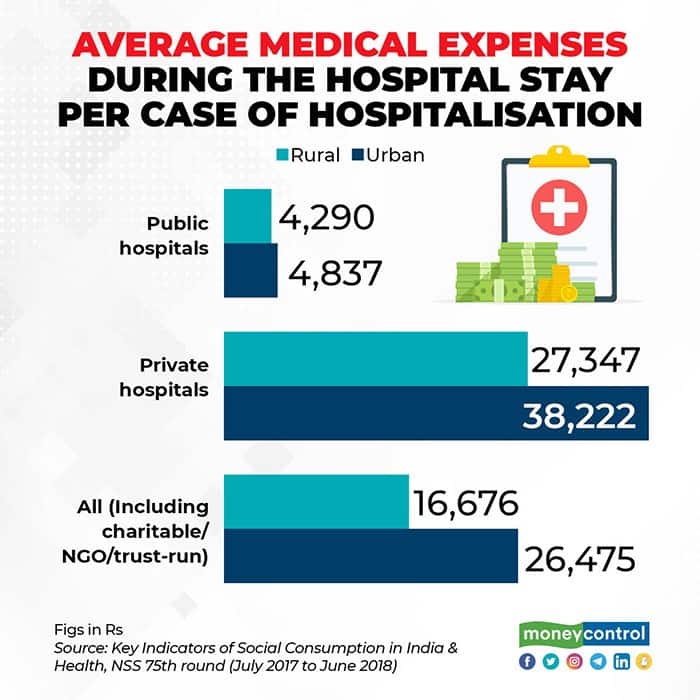 Private hospitals will always be much more expensive than government-run services and that is the norm worldwide. However, masses in most countries seek treatment in the public sector, either for free or for a small fee.

With a large population living on small incomes, the Union government and the states would do well to urgently invest in expanding and upgrading the public healthcare network and thus prevent massive losses of lives from another disease, epidemic or pandemic.
Tina Edwin is a senior financial journalist based in New Delhi.
Tags: #coronavirus #covid second wave #Covid-19
first published: May 7, 2021 03:25 pm