Bihar Election 2020 | 'Encouraging' voter turnout amid COVID-19: What it means

More than 55 percent turnout in the two phases of Bihar assembly elections matches the first two phases of the polls held in 2015.

The turnout would be moderate under normal circumstances. But being held under the the shadow of  COVID-19, it is encouraging, according to the experts and poll officials. They said it indicates that the voters of Bihar masked their fear of the pandemic and stepped out to exercise their franchise in the state which has historically been among the worst in the country in terms of voter turnouts.

“It is an encouraging signal,” Prof Sanjay Kumar of the Centre for the Study of Developing Studies (CSDS) said after the voter turnout in the first phase of elections. The three-phase Bihar assembly election is the first voting exercise being held in India since the outbreak of the Coronavirus pandemic.

“Encouraging that voters are taking interest in the election, coming out to vote despite Corona,” Prof Kumar elaborated.

Chief Election Commissioner Sunil Arora who called it a “good turnout despite COVID-19 threat” thanked people of Bihar, the local administrations and the polling staff after the second phase was over. The polls are being held amid unprecedented health protocols for voters, politicians and election officials to prevent the spread of COVID-19. 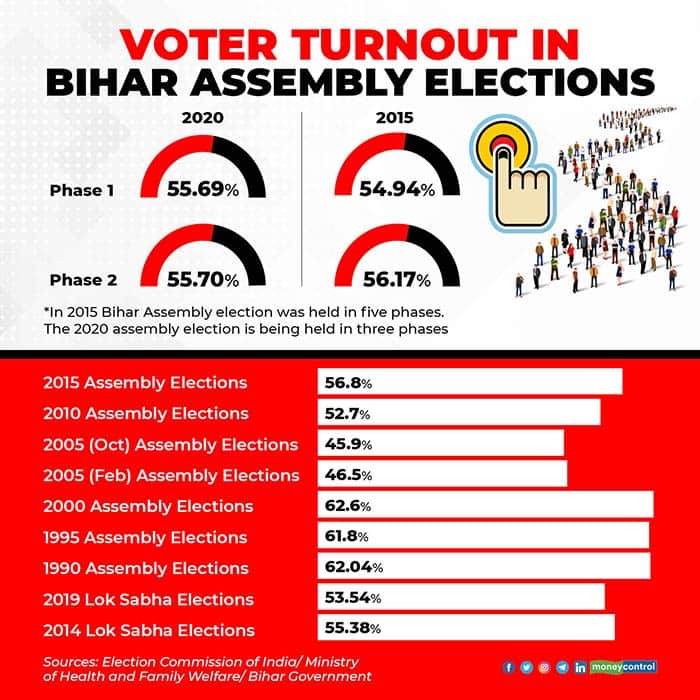 What are the implications of a good turnout? Analysts say that a voter enthusiasm would mean a popular vote against the incumbent government.

“The turnout is satisfactory for sure, especially when elections are being held amid the pandemic. We cannot say what it means exactly. But it does indicate an anti-incumbency against Nitish Kumar,” NK Choudhary, political analyst and former faculty at Patna University told Moneycontrol.

The BJP is contesting the elections as part of the NDA, along with the Janata Dal (United) and other parties. The ruling coalition is challenged by Mahagathbandhan comprising RJD, the Congress and the Left parties.

Most of the opinion polls have predicted an NDA win in Bihar.

Many attribute the good turnout to pandemic-induced reverse migration. Overall, three lakh migrant workers are registered as voters in Bihar’s 38 districts. Of these, nearly 19 lakh had returned home during the pandemic and stayed back, officials said.

Low voter turnout has many reasons, experts said, disenchantment among voters being the primary one. Some say that political mobilisation in Bihar has been limited compared to other states, others say the reduced enthusiasm in voting in the last two decades because the governments have not delivered. “However, over the years people were dissatisfied by the governments as they did not witness any improvement in their lives. Gradually, the enthusiasm started waning,” Prof Diwakar said.

The novel coronavirus is surprisingly showing an impressive decline in Bihar even as political rallies and meetings drew huge crowds in the poll-bound state. Of the 2.19 lakh COVID-19 cases reported so far, 96.5 per cent patients have recovered and 1,113 have died, according to the state health department.