Why it makes sense for Air India to place a mega aircraft order?

The expected aircraft order will give an operational boost to the airline, help in image building and reduce delays caused by aircraft maintenance issues. The older generation of aircraft in its fleet restricts efficiency and their replacement will be handy in taking on competition from budget carriers on the one hand and Gulf-based airlines on the other.

Air India, now a part of the Tata Group, is on the verge of placing a mega order for both wide-body and narrow-body aircraft. Media reports say the order for 200 to 300 aircraft will go to Boeing or Airbus or be divided between the two plane-makers.

The fleet may seem sizeable until you compare it with IndiGo’s more than 280 aircraft. Just to put the fleet size in perspective, IndiGo has another 400 aircraft on order.

What’s interesting is why there’s such a sudden need for a massive aircraft order at a time when the airline is preoccupied with other developments.

Notably, the airline is waiting for its new Chief Executive Officer and Managing Director Campbell Wilson to take its helm; it is also running a Voluntary Retirement Scheme (VRS) for its employees.

In addition, Tata Group has initiated a mega exercise to merge Air India Express with AirAsia India and then to combine the new entity with Air India.

The expected aircraft order will give an operational boost to the airline, help in image building and reduce delays caused by aircraft maintenance issues.

The older generation of aircraft restricts efficiency and their replacements will be handy in taking on competition from budget carriers on one hand and Gulf-based airlines on the other. 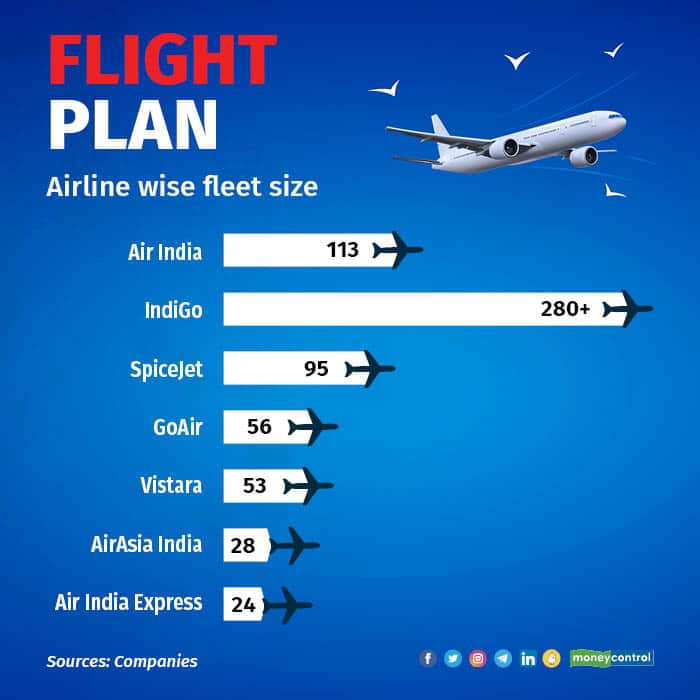 According to Mark Martin, chief executive of aviation consulting firm Martin Consulting, the new aircraft will aid the airline’s effort to cater to present and future passenger demand.

The scenario is especially valid in the light of the hammering the aviation industry has received from the COVID-19 pandemic. High fuel costs, especially since the Russian invasion of Ukraine in February, have set back growth.

Nonetheless, the future of Indian aviation is bright enough, given the country’s enormous population and growing international travel needs.

Start of a new growth cycle

Credit rating agency ICRA says the recovery in domestic passenger traffic has been strong after the third wave of the pandemic and reached 98 percent of pre-Covid levels in April and May 2022.

Although it has varied, the daily passenger count reached as high as 400,000 passengers per day recently and averages over 300,000 daily.

“The timing is absolutely right and significant as post COVID-19 the travel and tourism segment is expected to experience a several-year-long growth cycle,” Martin said.

“As of now, recovery is well balanced and in line with expectations; the only concern is that of capacity which will get added once Air India augments its fleet.”

On the international front, Air India has the dominant market share.

In FY21, Air India had over 17 percent market share of flying Indians abroad. But the turf is not unchallenged. With a sizeable fleet and orders for new ultra long-haul aircraft, IndiGo is threatening Air India’s dominance.

Currently, IndiGo, which has the largest domestic market share, is restricted in range due to the operational limitations of its workhorse A320 family of aircraft. As of now, it flies to the edges of Asia, operating flights to Vietnam in the east and Turkey in the west.

This scenario might change after the airline gets its hands on the A321XLR, which is the extra long-range variant of the Airbus A320 family.

Lately, Air India demonstrated its capability to operate flights to 60 international destinations during the COVID-19 evacuation programme. The airline operates profitable routes to London, New York, San Francisco and Frankfurt, among others. The new long-haul aircraft will allow it to open routes to Africa, East Asia and even to South America.

A case in point, analysts said, is the success story of Turkish Airlines which operates to around 200 destinations. In Air India’s case, the airline will not only be able to ferry the huge Indian population base but also increase the inbound tourism flow.

Subsequently, the airline needs new aircraft to expand its horizons and make use of these advantages to the fullest. On top of that, new aircraft will enable the airline to provide new products at different price points as well as improve customer experience.

Recently, old aircraft have brought in criticism from passengers and go against the group’s overall plans to make the airline a cultural symbol of Indian hospitality around the world. By placing a mega order, the airline is expected to reap the benefits of heavy discounts that come with bulk purchases.

“Currently, Air India has a relatively older fleet as compared to some of its peers and the induction of new aircraft in the fleet will help to reinvigorate the brand,” said Suman Chowdhury, Chief Analytical Officer, Acuité Ratings & Research.

“Given the vulnerable scenario in the global aviation industry, this may be the right opportunity for Air India to negotiate a bulk contract with the original equipment manufacturers (OEMs) for either outright purchase or lease which will improve its competitiveness in the longer run.”

On list price basis, the cost of narrow-body aircraft averages around $80 million while wide-body ones come with a price tag of over $300 million.

“Importantly, funding support from the Tata Group will be an important differentiator for Air India and its associates as it will provide more comfort to the stakeholders such as the lenders, lessors and the aircraft OEMs,” Chowdhury said.

The Tata Group can also utilise any offset obligations. Its mega industrial base already manufacturers military aircraft parts under such obligations.

In addition, new aircraft are expected to be more fuel-efficient, saving on the cost of aviation turbine fuel which has skyrocketed due to the ongoing geopolitical crisis in Europe.