While most stocks have been on a tear, the LIC Housing Finance stock has been a rank under-performer with loan growth ranging at around 15 percent, which is lower than most peers.

Vinay Sah, MD & CEO, LIC Housing Finance says the peers could be showing better growth rate because their base is lower. He is happy with the loan growth of the company and is upbeat on the demand going forward and growth would remain in excess of 15-16 percent for all the quarters. 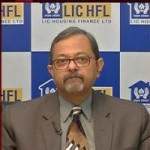 Net interest margins (NIM) in Q1FY18 for the company stood at 2.5 percent compared to 4 percent for HDFC and around 3-3.25 percent Dewan housing and Indiabulls Housing.

Sah says NIM mainly depend on the cost of borrowings, which currently is going down and so it will help improve NIMs. Their lending rates are also very low but would strive to improve on the NIMs.

Talking about the slightly rising gross non-performing assets (GNPAs) which were up from 0.43 percent in Q4FY17 to around 0.72 percent in Q1FY18, Sah says although 0.72 percent is not too much of a worry they remain watchful and keep analsing the portfolio.

He also explains why the net interest income is seen lower than its peers in the first quarter.