Titan Q1 FY20 preview: Jewellery sales not up to the mark, watches and eyewear see traction

Titan, one of the crown jewels of the Tata Group, released its quarterly preview. While the management did not sound too upbeat on the jewellery front, top-line growth in watches and eyewear are positive takeaways. We remain bullish on the company in spite of its steep valuation.

Here's a snapshot of how things are likely to pan out across segments.

For the quarter, top line grew by 13 percent year-on-year, below the management's expectations. Though seasonality also had a major role to play, it is pertinent to note that the rate of growth of jewellery sales has slowed quite a bit, both sequentially and year-on-year (YoY).

Titan launched the 'Swayahm' collection of plain and studded jewellery, to be sold through the company's 'Tanishq' outlets.

As many as 12 Tanishq stores, spanning a total of 34,000 square feet, have been added to Titan's existing store count of close to 287 stores. Most of these additions took place in tier 2 and 3 cities of India.

Boosting institutional sales like gifting undertaken by corporates and generating online traction (for Tanishq) will be among the new priority areas, going forward.

In Q1 FY20, revenue grew 19 percent year-on-year. This was attributable to the following.

- Customer additions under the 'Fastrack' and 'Titan' brands

In comparison to Q1 FY19, this segment has done visibly better in Q1 FY20.

Furthermore, barring a few quarters in the past, this segment’s contribution to Titan’s consolidated revenue has been steadily increasing. As a result, any margin expansion could have a positive impact on the overall EBITDA margin. Turnover in this segment grew by 13 percent year-on-year. This was on account of

- An uptick in sales across trade channels

- Introduction of the 'Floatables' range of 'Fastrack' sunglasses

Owing to heavy investments in brand-building, this segment is unlikely to break even this time as well.

Titan's 'SKINN' perfumes are being made available at more points of sale across India, especially in department stores and e-commerce marketplaces.

'SKINN' has been gaining market share gradually. To accelerate this process and grab the attention of first-time buyers, small-sized packs may be introduced.

'Taneira', Titan's saree brand, is gradually expanding its reach as well. The company added one store in Hyderabad during the quarter, thus taking the total count to 5. New product variants will be launched periodically.

Despite the good margin profile, the contribution of this segment is too minuscule (barely 1 percent) to meaningfully enhance the consolidated profits of the company.

Lack of operating leverage in jewellery (80 percent of sales) and losses in eyewear (3 percent of sales) will offset the margin improvement in watches. Therefore, we expect earnings to remain subdued when Titan announces its actual Q1 FY20 numbers in August.

The management's cautious Q1 commentary, coupled with a hike in basic Customs duty on gold from 10 percent to 12.5 percent (in the Budget), resulted in a price correction for the last 6 days. Even after this bout of corrections, Titan trades at rich valuations (at 42 times its FY21 earnings). At such elevated multiples, a revenue or margin miss in the upcoming quarters may trigger a further downfall.

Given the weak consumption sentiment, the possibility of an appreciable re-rating in the foreseeable future appears bleak. Nevertheless, in the consumer discretionary space, Titan remains one of our top picks, given its superior brand positioning. Investors looking to build a defensive portfolio may want to consider taking advantage of the current weakness. 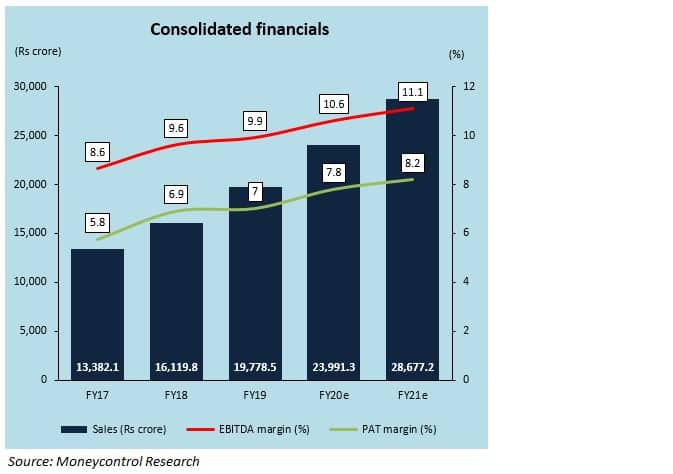