If you had bought even 25 bitcoins at the start of the year, you would have become a crorepati by now!

CoinSwitch Kuber | Apart from a plethora of facilities it provides to customers similar to other crypto exchanges, CoinSwitch Kuber allows users to buy cryptocurrencies with a credit card at an effective price. Funded by Sequoia Capital, the exchange allows users to access the pooled liquidity of the leading exchanges in India to get the best rate and trade instantaneously.

Almost all the major cryptocurrencies, especially bitcoin and ether, have seen an unprecedented growth in its valuation in this year. Riding on increasing global acceptance and the prospect of heavy returns, the valuation of bitcoin has multiplied over seven times in 2017. Till now, the growth has belittled the prophecies of many financial experts who regarded it as a part of a larger bubble.

That means, if you had bought even 25 bitcoins at the start of the year, you would have become a crorepati by now!

On December 31, 2016, bitcoin closed at USD 968.42 and growing at a compound monthly growth rate of over 22 percent, it crossed USD 7,000 for a while on November 2. Initially, while the legal acceptance of bitcoin as a currency in Japan encouraged more people to invest in it, the banning of the same in China in September saw the first major correction in its value. 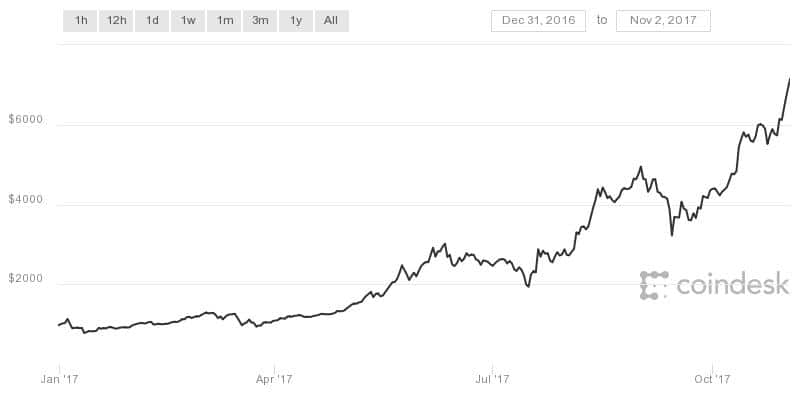 The most recent surge, of over USD 900 in three days can be attributed to Chicago Mercantile Exchange's (CME) announcement on Tuesday that it could come up with bitcoin futures, reflecting its growing clout.

CME Group Inc., the world's largest derivatives exchange operator, said that it would provide a regulated trading venue for the cryptocurrency market and would launch the new derivatives in the fourth quarter of 2017. There were also reports that Goldman Sachs was considering offering bitcoin trading.

The market cap of the currency crossed USD 100 billion in October and now stands at USD 118 billion. The total supply of bitcoin in the market stood at 16,659,613. Supply indicates the total number of bitcoins available.

Interestingly, data released in October from SEMrush, a search engine data analytics firm, found the price had a 91 percent correlation with Google searches on bitcoin, suggesting that all news—whether negative or positive—drives up demand, even if bad news can have a temporary negative effect.

The growth is not limited to bitcoin only. Other currencies grew in tandem, although not as much as one of the oldest cryptocurrencies in the world. The surge in the market also gave birth to quite a few other currencies.

Ethereum or Ether, the next biggest cryptocurrency in the market has also seen over 3,600 percent growth in its value over the year, much more than Bitcoin. At the start of 2017, it was priced at USD 7.98, and on Thursday, it was trading at over USD 283. However, lately, Ethereum has seen a correction in the price. Its all-time high was USD 389 on September 1. The market cap of the currency stood at USD 27.11 billion as on November 2.

Despite their growth, experts and financial institutions have had a lukewarm response towards them, mostly, terming the growth part of a bubble waiting to burst.

Billionaire Saudi Prince Alwaleed bin Talal, widely known as Warren Buffett of the Middle East predicted that Bitcoin ‘‘will implode one day’’. Whereas, UBS said that cryptocurrencies like Bitcoin are in a "speculative bubble" and are unlikely to become mainstream currencies.

Many governments and central banks like Russia and China have either banned the websites offering cryptocurrencies or deemed it illegal to trade.

The former stockbroker, who has been portrayed in the movie The Wolf of Wall Street, Jordan Belfort termed the Initial Coin Offerings (ICOs) as “the biggest scam ever”. European regulators also have warned the investors that they should be prepared for a scenario when the value of the tokens, usually issued in exchange for cryptocurrencies like Bitcoin or Ether by ICO promoters, drops to zero.
Shubham Raj
Tags: #bitcoin #cryptocurrencies #Ethereum
first published: Nov 2, 2017 05:47 pm