Upcoming Webinar:Watch a panel of experts discuss: Challenges of continuously evolving regulation for Cryptocurrency, on 7th July at 3pm. Register Now
you are here: HomeNewsBusinessTechnicals

As Nifty likely to consolidate in coming week, time to look beyond it

From here on, sustenance above 13,146 i.e. peak of long black bar seen in Wednesday's session is essential to regain momentum on the upside.

November brought in good tidings for the Indian indices. Not only FIIs have gone ballistic by pumping in record inflows, but leadership sectors (i.e. Banks, Financials Services & Autos) have been among the major movers. Nifty conquered 13,000 mark earlier in the week but thereafter failed to sustain above the same.

During recent downtick, Nifty defended its three-digit Gann number of 127(00) and immediately bounced back. In the last few sessions, benchmark index has been toiling hard to sustain above 130(00) i.e. midpoint of current three-digit Gann channel. From here on, sustenance above 13,146 i.e. peak of the long black bar seen in Wednesday's session is essential to regain momentum on the upside.

Despite the index facing the presence of overhead hurdle, it has been consistently holding above the confluence of support zone. Such type of price structure can be viewed as a pause after recent advance. The index has formed a positive column reversal pattern, yet it has not confirmed a double top buy on point & figure (P&F) chart, resulting in a triangle consolidation pattern. With Index consuming time at the top of its trend, our customised Nifty breadth had corrected from overbought territory to neutral territory, which implies stocks/sectoral churning (as per Thursday’s close).

The action of the last few sessions, clearly highlights that it is time to look beyond the index. The Nifty Midcap index rallied around 4 percent this week and outperformed the benchmark index. Weekly ratio chart of Nifty Midcap 100/Nifty shows a basing pattern in place. In 2020, ratio has attempted to break above 1.52 levels, confirmation of a move above the same would result in breakout from the base building pattern and outperformance of Midcaps. Ratio is trading above its yearly mean too, which implies that corrective move would provide buying opportunities in this space.

Triangle consolidation is also seen in P&F chart of BankNifty. A move above 29,760 would result in a double top breakout. 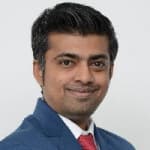 Nifty Pharma index rallied by over 2.5 percent this week, the ratio of Nifty Pharma/Nifty is consolidating at the bottom around the confluence of support; post recent underperformance. Ratio had rallied by over 50 percent from February-end till May 2020. Thereafter, we have seen whipsaw moves as ratio failed to rekindle the momentum. Despite recent underperformance, since September 2020, the ratio is yet to break below 50 percent retracement mark of the above-mentioned up move of February – May. Plausible double top breakout & triangle breakout will result in outperformance of pharma stocks in the near term.

Pritesh Mehta is a Lead Technical Analyst - Institutional Equities at YES Securities. He holds a Master's degree from NMIMS. Prior to this assignment, he was associated with IIFL for 13 years as one of their lead technical analysts. His skills and forte include in-depth technical analysis and identifying actionable momentum trades. Pritesh excels in trend identification, with a special focus on inter-market analysis, gann & ratio charts.
Tags: #Expert Columns #Nifty #Sensex #Technicals
first published: Nov 28, 2020 02:39 pm