Domestic mutual funds turned out to be net equity buyers for January 2019.

Equity benchmarks were flat in the month of January, while broader markets were weak. This resulted in lowest net MF inflows during the month, but inflows through systematic investment plan remained strong.

MF industry assets increased to Rs 23.4 lakh crore in January 2019 from Rs 22.8 lakh core in December 2018 on the back of inflows into liquid funds, it added.

He said the bullet investments have slowed down but the SIP flows continue to grows stronger and are expected to touch Rs 9,000 crore by March 19.

In January, the 30-share BSE Sensex gained half a percent while the Nifty50 fell 0.29 percent. The broader markets underperformed frontliners as the Nifty Midcap and Smallcap indices were down 5 percent each.

India Volatility Index also increased sharply by 7 percent to 17.12 levels during the month.

Nifty IT was the biggest gainer among sectoral indices, rallying 7.3 percent followed by energy (3.2 percent) and bank (0.5 percent) whereas auto and media (led by Zee Entertainment) hit hard, falling 11 percent and 15 percent, respectively.

Among sectors, pharma was bought by FPIs but sold by MFs. Banks, Industrials, Metals and Autos were sold by FPIs and bought by MFs while both FPIs and MFs bought Energy and Consumer staples in January.

Here are 30 large, mid and smallcaps bought & sold by MFs this month. 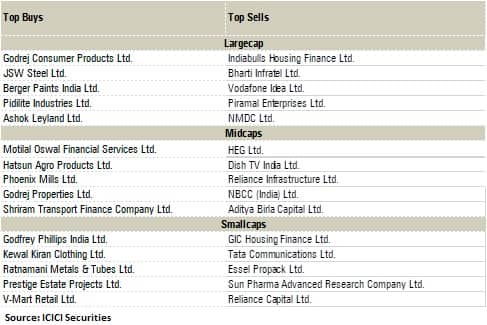