The idea behind lower value packs and putting paywalls for premium content is to recover the cost of content, marketing and distribution
Moneycontrol News
Apr 8, 2019 / 03:18 PM IST

Major over-the-top (OTT) players have slashed their subscription prices to widen their consumer base with a two-pronged strategy: offering packages for shorter time periods and allowing consumers to choose their content.

Netflix is testing its weekly and monthly plans starting at Rs 65 per week and Rs 250 per month for some mobile users. This is half the price of its basic, standard plan of Rs 500. Unfortunately, if launched, it will still be more expensive than Amazon Prime which costs Rs 129 a month or Hotstar’s Premium monthly pack worth Rs 199.

Hotstar launched a Hotstar VIP pack at Rs 365 a year, much lower than its Premium service which is priced at Rs 999 per year. The two packs are different in terms of access to original content and sports coverage. Even SonyLIV app is testing weekly packages. It has a monthly subscription plan of Rs 99 as of now.

Regional content apps like ZEE5 last year launched monthly packs starting from Rs 49 in languages including Tamil, Telugu and Kannada. This was to compete with its rival Sun NXt, on which consumers can stream Tamil, Telugu, Kannada and Malayalam content, which has a quarterly pack of Rs 130.

According to a report by KPMG, the OTT space in India only has 2-2.4 million subscribers availing the services directly. The others are considered paid subscribers through telco-based plans. This leaves a wide scope for OTT players to pick up new consumers, drive up subscription revenues and improve bottomline.

Reportedly, the ad revenue of these players is not enough to recover the cost of content, marketing and distribution. Social media players YouTube and Facebook account for 70 percent of overall digital ad revenue. The balance 30 percent is shared by the OTT players. According to data, while the revenue of the video streaming industry will rise, its growth rate is expected to fall in the next four years, as is the average revenue per user. 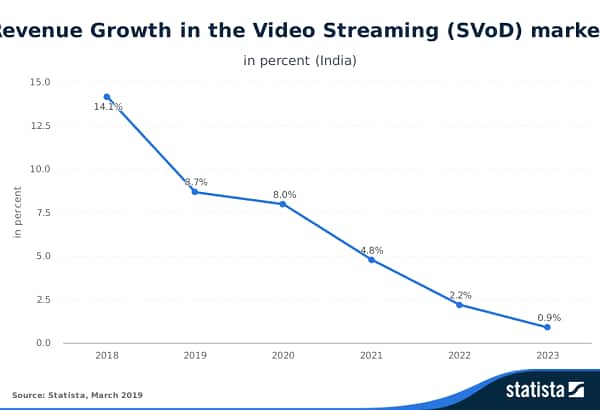 "With such price reductions and pack duration rationalising, OTT players are looking to expand their paid subscriber base. Over time, these will graduate to higher priced packs and improve the bottomline," Girish Menon, Partner at KPMG, told The Financial Express.

OTT prices in India are higher than that of cable TV, which is not the case in the West. In the US, Netflix costs $15 while a cable connection is for $100. If the major players release cheaper packs, this discrepancy may be met in India. These packs may also help in getting impulse users, and they would also facilitate sampling of content.

"Most broadcasters in the OTT space have strong partnerships with advertisers. So, it is not very difficult to get advertising even for original content. The idea behind lower value packs and putting paywalls for premium content is not just to recover cost, but to induce the habit of paying amongst customers," Uday Sodhi, Digital Business Head at Sony Pictures Networks India, said.
Moneycontrol News
TAGS: #Advertising #Business #Companies #digital streaming #Video streaming
first published: Apr 8, 2019 03:18 pm