Shares of most teleocm companies remained under pressure on October 29 after the Supreme Court had broadened the definition on Adjusted Gross Revenue (AGR) last week.

On October 24 the Supreme Court rejected the telecom companies' definition of AGR, and held that all revenues, except for termination fee and roaming charges, would be a part of the AGR.

However, the apex court ordered companies to pay dues to the Department of Telecom within three months, CNBC-TV18 reported.

SC noted that not only the original charges, but also the principal interest and penalties on delayed payments must be payable.

This means that telecom companies will have to shell out as much as Rs 92,642 crore to the government. More than half of these dues are owed by Bharti Airtel and Vodafone Idea.

Also, Bharti Airtel was scheduled to announce its Q2 numbers on October 29. But, the company said that it had deferred it until November 14 due to the adjusted gross revenue (AGR) issue.

On the other hand, shares of Mahanagar Telephone Nigam Limited (MTNL) were locked at 5 percent upper circuit after the government telecom company announced merger with Bharat Sanchar Nigam Limited (BSNL) in last week. 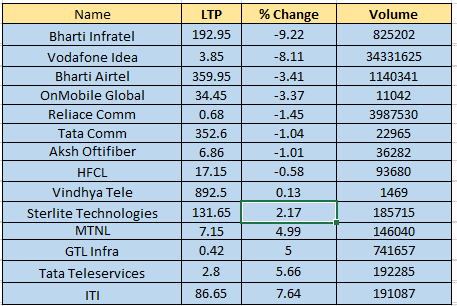