The index was in firm grip of bears which pushed it below crucial support levels. The carnage made investors poorer by over Rs 14 lakh crore in market capitalisation. 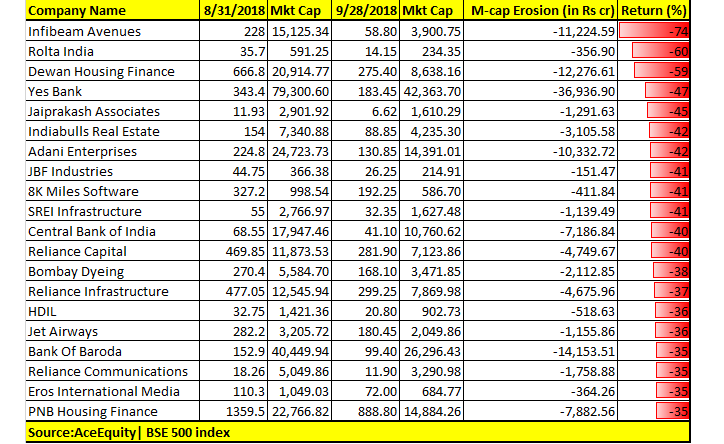 The carnage on the D-Street not only wiped market capitalisation but also dented sentiment which reflected in a low rollover for October series.

The broader markets, too, saw big cuts. The S&P BSE Smallcap index fell 16 percent, while the S&P BSE Midcap index was down by 12.5 percent in September.

The fall in the indices was led by financials largely because of the weightage they carries in benchmark indices which got immense exposure since demonetisation, suggest experts.

“Since demonetisation, the herd mentality had jacked up financials, banks and NBFC stocks to great heights on the pretext of financial inclusion and formalisation of the economy. This led to the financials gaining disproportionate share in Nifty50 at 35% of the free float market capitalisation which was unheard of in the past,” Jimeet Modi, CEO & Founder of Samco Securities & StockNote said.

“But, there are other stocks that are currently available at reasonable valuations and give good opportunities to accumulate, but somehow the market scare created by crowd behaviour has overpowered rational thinking and has hijacked the sensibilities of investing at cheaper valuations. Investors should, therefore, make use of this opportunity to accumulate shares rather than selling,” he said.

Trade war woes, rising global crude oil price which breached $83/bbl level, rupee depreciation against USD at a record level near Rs 73/USD, liquidity concerns in NBFCs, hike in interest rates by US Fed rate, and rising concerns around weak macros are some of the factors which took a toll on markets.

“The index and stocks start on relatively lower total future open interest in October. The Nifty open interest (OI) is lower by 29 percent while Bank Nifty OI is down by about 18 percent compared to total open interest at the beginning of September expiry,” Shubham Agarwal, CEO & Head of Research at Quantsapp told Moneycontrol.

“The Nifty option Put Call Ratio – Open interest wise corrected sharply in September series from high of 1.80 to 1.2. The October series too started with OI PCR of 1.12 which indicates that Put and Call writers are equally distributed in Nifty leaving less room for any trended movement to pick up,” he said.