Looking for multibaggers? Nearly 30 stocks turned smallcaps from midcaps in 2018

Most of the stocks might have technically moved to a midcap category or a smallcap but they still remain to be part of respective indices. Many stocks which gave multibagger returns in the year 2017 have corrected in double digits so far in the year 2018, and any drop could be used as a good buying opportunity.

The year 2017 was full of surprise as Indian market climbed all wall of worries to hit fresh record highs and the momentum continued till the first month of the year 2018, but then momentum fizzled out which led to a 10 percent kind of fall in benchmark indices from record highs.

The S&P BSE Sensex climbed Mount 36K while Nifty rose above 11,100 in the month of January but market lost momentum soon after the Budget was announced and global cues turned unfavorable.

Well, 2018 has been the year of a disappointment so far. Why do we say that? Because, data suggest that stocks in the Ultra largecap category, largecap, midcap and even smallcap in terms of market capitalization came down in the year 2018 as compared to the year 2017.

However, stocks in microcap category increased in the year 2018 which suggests that plenty of stocks witnessed huge correction which brought their market cap below Rs 1000 crore.

Most of the stocks might have technically moved to a midcap category or a smallcap but they still remain to be part of respective indices. Many stocks which gave multibagger returns in the year 2017 have corrected in double digits so far in the year 2018, and any drop could be used as a good buying opportunity.

Most of the stocks largely saw a correction which was more technical in nature while the fundamental aspect of some of these stocks still remain intact, suggest experts.

Shankar Sharma of First Global in an interview with CNBC-TV18 said that whenever markets correct, investors should use these dips and pick smallcap stocks which are displaying earnings growth potential.

The very reason Sharma likes smallcaps because they don’t get impacted by the worsening macro story (rise in interest rates or inflation).

However, most experts feel that smallcap theme, in general, might not be able to outperform in 2018 (select smallcaps could outperform) compared to largecaps which might hog the limelight. This is evident from data which shows less volatility in largecaps space compared to mid or smallcaps.

From the Ultra Largecap category in which the market capitalization is more than Rs100,000 crore as many as 3 stocks lost the tag of ultra largecaps which include names like Bajaj Finance, BPCL, and Tata Motors.

On the other hand only one stock, i.e. IndusInd Bank entered the Ultra Largecap space with a market capitalization of over Rs100,000 crore in the year 2018.

In the largecap space which has a market capitalisation in the range of Rs 20,000 to Rs 100,000 crore, as many as 10 stocks lost the tag of largecaps in the year 2018 which include names like Bank of India, Canara Bank, Godrej Industries, MOSL, NBCC, PNB Housing Finance, RBL Bank etc. among others.

“The valuations have come off from the recent highs which makes largecaps a preferred play. Mid-caps after witnessing correction are still trading at higher valuations than large caps so we do not rule out further correction if earnings falter in the coming quarters,” Sandeep Chordia, Executive Vice-President - Strategy, Kotak Securities told Moneycontrol. 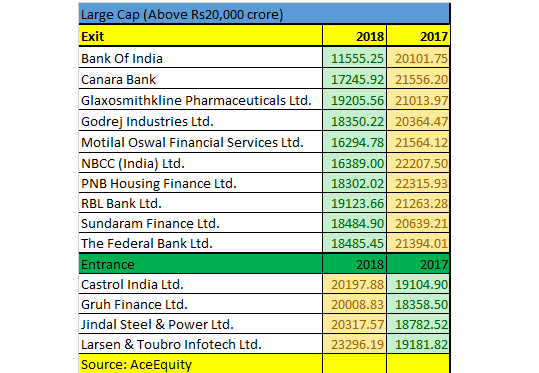 On the other side, three stocks entered the midcap space which includes names like GE Power, NIIT technologies, and Venkys India Ltd.