Among the sectors, the PSU bank index was down close to a percent dragged by PNB which was down over a percent followed by State Bank of India, Indian Bank, Bank of Baroda and Canara Bank.

The auto index and the metal sector have added half a percent each. The top gainers from the auto space are Eicher Motors which is the top index gainer followed by Maruti Suzuki, Balkrishna Industries, Hero MotoCorp and Bajaj Auto.

Among the metal names, SAIL jumped over 4 percent followed by JSPL, Hindalco Industries and Tata Steel. 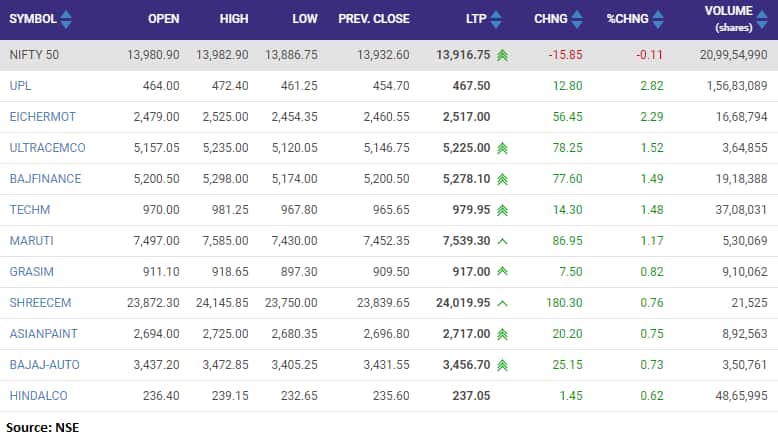 The markets seem a little nervous to hit the 14000 marks. We have gone around that level yesterday and today. It is really a mere formality to achieve that as the Nifty seems poised to conquer 14100 as a potential target, said Manish Hathiramani, Proprietary Index Trader and Technical Analyst, Deen Dayal Investments.

"A good support lies at 13600 so traders can consider buying into this trend during any intraday correction," he added.

Disclaimer: The views and investment tips expressed by investment experts on moneycontrol.com are their own, and not that of the website or its management. Moneycontrol.com advises users to check with certified experts before taking any investment decisions.​
Sandip Das
Tags: #Buzzing Stocks
first published: Dec 30, 2020 12:39 pm