Bata India on a solid footing with its focus on broader footprint, premium products

Bata India managed to post a steady but subdued set of numbers in the quarter gone by. 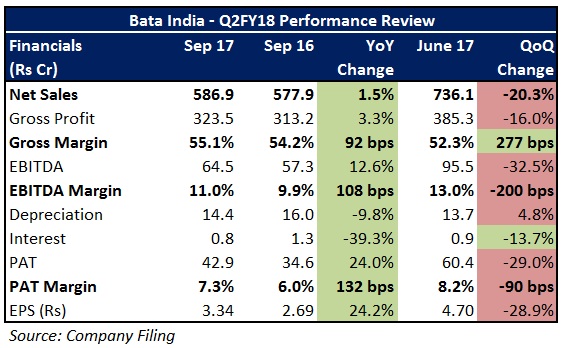 In Q2FY18, the uptick in gross and operating margins was on account of a better product mix and new launches during the quarter. A lower off-take by the wholesale channel, coupled with an inventory build-up, caused some strain in working capital cycle.

Going forward, on which fronts will the footwear major focus on?

The share of premium products (Hush Puppies, Power, Marie Clarie, among others) in Bata’s top-line is expected to increase from 30 percent (as on September 2017 end) to 45-50 percent by March 2018.

‘Phantom’ (one of Bata’s power brands with an average realisation of Rs 3,500 per pair) has shown traction ever since it was launched in Q4FY17. The company hopes to capitalise on this response by ensuring adequate stocking across all branches in the brand’s target market.

A combination of these measures, backed by macro tailwinds (such as rising disposable incomes and greater urbanisation), should augur well for the company (by virtue of a higher average selling price per unit) as it continues to invest in brand-building activities and changes its business model from ‘push’ to ‘pull’.

Renewed focus on women and kids categories should provide Bata the much-needed growth impetus. Women’s footwear has been growing 3–4 percent faster than other categories and constitutes nearly 26 percent of the company’s turnover. The aim is to notch this up to 35 percent over the next 3 years.

The company is also planning to actively promote its newly introduced category of tweens (age group of 10-14 years) products in sub-segments such as casual, sports, daily use, and outdoor.

Bata added 27 stores in H1FY18 to take its store count to 1290 as on September 30, 2017. The company is likely to expand its brand visibility by adding 70-80 large retail stores every year, particularly in upscale locations. Big outlets may enable the company to derive better operating leverage on the back of higher footfalls, improved asset utilisation levels, and economies of scale.

The company’s strategy entails laying more emphasis on strengthening its network through franchises, especially in tier 2 and 3 cities of India. Accordingly, in the next 3 - 4 years, the franchisee count is expected to increase from 50 (at the moment) to 300.

Though competition from e-commerce portals remains a threat, Bata should gradually start reaping benefits of the industry transition (from unorganised players to the organised ones) in the aftermath of GST implementation.

With no significant capex plans in the near-term, the company’s return ratios and cash flows are expected to improve as well. While the valuation (at 37.6x FY19 projected earnings) tempers our excitement, for long-term investors, we recommend accumulation on any weakness.