A bear market is a condition in which stock prices fall continuously and the pessimism or fear pushes the stock prices even lower wiping out the considerable wealth of investors.

The S&P BSE Sensex might have fallen about 11 percent from its highs which was in August) but the carnage was also visible in the small & mid-cap indices which have tanked more than 20 percent each from highs, effectively entering bear phase.

Theoretically, a bear market is a condition in which stock prices fall continuously and the pessimism or fear pushes the stock prices even lower wiping out considerable wealth of investors. Well, figures vary, but a fall of 20 percent or more from the peak effectively puts a stock or an index in a bear market.

So the question is – are we in a bear market? Yes, we are, at least when in it comes to the broader market.

Both domestic and global factors led to fall in the broader market but the key reasons for the fall are higher valuations and excessive froth in some stocks.

“Small and midcap indices having fallen more than 20% from their respective peaks and that surely puts them in a bear market category. One, they were trading at a highly extended valuation at the beginning of this calendar year, and secondly, inflows into equity market have taken a U-turn during the last few months,” Shailendra Kumar CIO at Narnolia Financial Advisors told Moneycontrol.

“Small and mid-cap stocks have been riding high on the back of formalisation of the economy. Implementation of GST is going to favour formalised listed businesses, and as large-cap companies already operate in a formal business environment this change is going to favour the mid and small listed companies more,” he said.

The cuts were deep in the small-cap space which saw as many as 8 stocks falling by over 90 percent and 230 stocks witnessing a decline of 50-90 percent in the same period which includes D-Link, Force Motors, Zen Technologies, Jindal Stainless, NBCC, Orient Green. Experts feel that corrections are common in bull market and small & midcaps tend to react more compared to larger peers. Both mid & smallcap indices have corrected after rallying by over 100 percent from 2016. Hence, technically, we might be in a bear market but it would not be fair to call it a bear market right now, suggest some experts.

“Mid and small-cap stocks tend to overreact in both directions and hence, they can ‘outperform’ Nifty50 both on upside as well as on downside. During the period of February 2016 and January 2018, Nifty50 registered a gain of 70 percent since February lows of 2016. Logically, when they correct then a loss of 50-80% of their earlier gains is quite normal for bull market corrections,” Mazhar Mohammad, Chief Strategist – Technical Research & Trading Advisory, Chartviewindia.in told Moneycontrol.

“In line with that, till now correction in mid and smallcaps is only 25% and 38%, respectively, from their highs. In terms of Fibonacci retracement levels, they corrected around 62%. So, we can rule out the possibility of these indices being in a bear market unless they go below February 2016-lows,” he said.

Mohammad further added that at the same time some stocks from this segment which slipped below February 2016-lows can be in the bear market. “A correction greater than 20% in emerging market like India can’t be labelled as a bear market as in the past several bull market corrections were greater than 20%,” he said.

A similar trend was seen in the mid-cap space. The S&P BSE Midcap index which plunged by 23 percent from highs was dragged by losses in Motilal Oswal, Reliance Capital, NBCC, Bank of India, Union Bank of India, Dewan Housing Finance, Reliance Infrastructure, Wockhardt, among others. 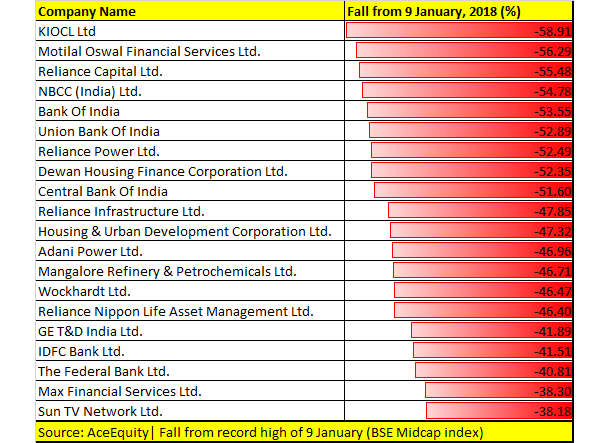 Most experts feel that we are heading towards lower levels, at least in the broader markets, hence, investors should be very careful while picking stocks. The correction has made small and mid-cap stocks attractive, and one should look at fundamentals before making any investment decision, they say.

“At present, sentiment is very weak in the market due to the sluggish macro environment. FPIs are continuously selling emerging market stocks amid concern over trade fears and rising interest rate in the US,” Sumeet Bagadia, Executive Director at Choice Broking told Moneycontrol.

“Since valuations of the mid and small-cap stocks have come down, investors can now pick fundamentally strong stocks for medium to long-term investments. Investors must analyse the company on qualitative as well as quantitative fronts,” he said.

Bagadia further added that investors should study historical financial performance, probable business growth and margin scenario for coming years, the impact of govt’s policy on the business model, industry prospect as well as the valuation.

Investors who got stuck with mid and small-cap stocks in their portfolio are advised not to compromise with quality while reviewing their holdings.

“In this corrective rally, even quality mid-cap stocks like Edelweiss Financial Services, Cholamandalam Investment and Apollo Tyre, etc have come down sharply. Any investor who wants to put fresh money is advised to start accumulating quality names from both mid & smallcap basket in a staggered manner with a medium to long-term horizon,” Soumen Chatterjee, Director Research, Guiness Securities told Moneycontrol.

“As valuations are now close to being reasonable, the two main factors to be considered in picking stocks in the broader market are earnings growth and stability of earnings,” he said.