According to the Reserve Bank of India’s annual report released on May 27, banks reported 9,103 frauds in FY22, involving Rs 60,414 crore. Interestingly, the total net profit of 12 state-run banks during FY22 stood at Rs 66,541 crore

The collective net profit of 12 state-run banks for the last financial year, which ended on March 31, 2022, was almost equal to the total frauds reported in the banking system during the same period.

According to the Reserve Bank of India’s (RBI) annual report released on May 27, banks reported 9,103 frauds in FY22, involving Rs 60,414 crore. Private sector banks reported the most number of frauds but state-run lenders trumped in value. Total frauds reported by private banks stood at 5,334, while those for state-run banks were at 3,078 in FY22.

Interestingly, the total net profit of 12 state-run banks during FY22 stood at Rs 66,541 crore, mainly due to an improvement in asset quality after COVID-19.

Out of this, State Bank of India’s (SBI) net profit was the highest at Rs 31,675 crore, and it accounted for 47 percent of the total profits of state-run banks in FY22.

For banks, a rise in bad loans due to an economic downturn is not new. However, the bigger worry is corporate fraud and under-reporting. The reluctance to report the cases often stems from the process to engage and adhere to the prescribed system of due diligence. 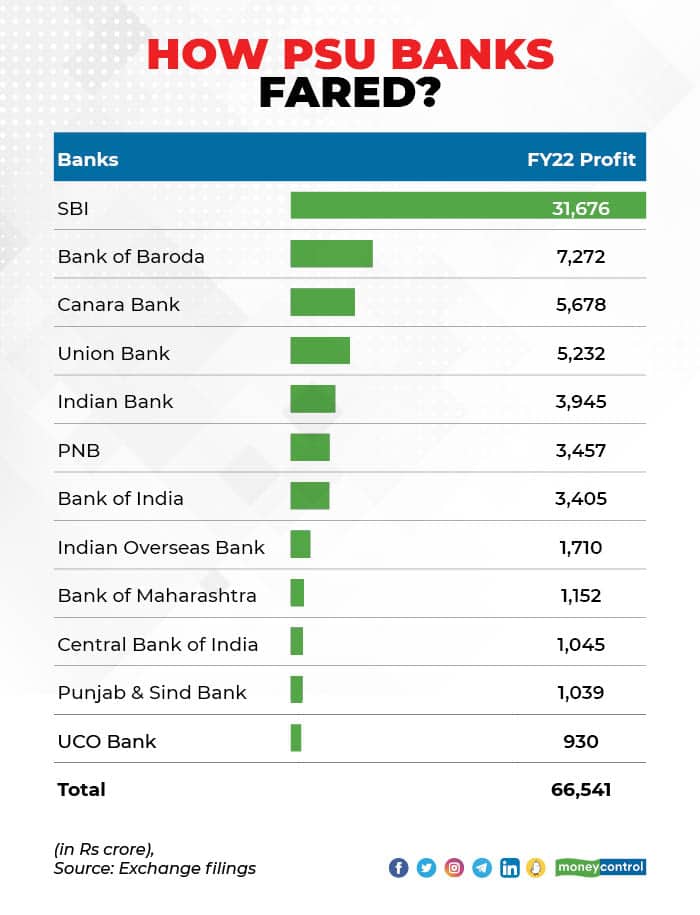 The banking regulator mandates banks to immediately log a complaint with enforcement agencies after a fraud is detected. This could lead to reputational risks and meddling by probe agencies, which is why banks generally under-report frauds. Once an account is declared as fraud, banks need to set aside 100 percent of the outstanding loans as provisions, either in one go or over four quarters. This could, in turn, dent banks’ profits.

The most infamous fraud in the history of India’s banking system was when fugitive diamond merchants Nirav Modi and Mehul Choksi siphoned off about Rs 13,000 crore from Punjab National Bank.

Since then, banks have been reporting fraudulent accounts to the RBI, the recent among them being loan accounts of IL&FS Tamil Nadu Power Company, Religare Finvest, Reliance Home Finance, Reliance Commercial Finance, among others. However, this has come with a lag.

The process of identifying, monitoring and digging for proof takes many months and in some cases, several years before banks formally report an account as fraud to the regulator. The RBI’s annual report also states that it is a “significant” time lag between the date of occurrence of a fraud and its detection throughout FY21 and FY22.

Now, an increased identification of frauds may not necessarily be a bad thing for Indian banks. In fact, it can prevent systemic risks.

“One thing that banks could adopt is the use of technology and timely monitoring of its assets,” said a credit rating analyst at a rating agency. “They may also need to put in place proper systems and procedure to ensure that the information available is made use as a part of the credit risk governance and fraud risk management.”
Siddhi Nayak is correspondent at Moneycontrol.com
Tags: #bank fraud #Mehul Choksi #Nirav Modi #Reserve Bank of India
first published: May 30, 2022 02:59 pm