Industry body data shows that in the last year, the number of EV finance players have grown from four to 13. And overall disbursements have grown 50% to Rs 1,000 crore with investments of Rs 1,000-2,000 crore including debt and equity.

India’s low-cost EV financing space is getting more traction with non-banking financial companies (NBFCs) in the segment witnessing a 10 to 12-fold jump in deployments in the past 12 months, even as investor interest in the segment increases exponentially.

This comes on the heels of healthy demand for non-four-wheeler electric vehicles (EVs) and EV-related ancillary startups like manufacturers of batteries and charging stations.

“Our monthly disbursements have increased more than 10 times in the last 12 months. A year back we were not even doing 10 percent of what we were doing now… This reflects the overall growth in the segment,” Sameer Aggarwal, founder of EV finance startup RevFin, said in an interaction.

Founded in 2018, the Delhi-headquartered RevFin has a presence in over 300 towns in India and is mainly in the EV three-wheeler financing segment. The startup recently raised Rs 100 crore funding in debt led by Northern Arc, Liquiloans, and the UK charity Shell Foundation, among others.

Another player in the segment, Mufin Finance, also based in Delhi and which recently rebranded itself and set up a dedicated EV finance arm called Mufin Green, has been able to bring EVs worth Rs 160 crore on Indian roads in the four years of its existence.

“Our current active AUM (assets under management) is around Rs 110 crore as on Aug 31, 2022. We hold 7 percent market share in e-rickshaw financing and have already covered nine states, 114 locations and 800-plus PIN codes across India,” Pankaj Gupta, chief executive of Mufin Green, told Moneycontrol.

The boom in sales of e-rickshaws and resultant loans is borne out by Akasa Finance, based in Noida, Uttar Pradesh and which focuses on financing e-rickshaws and electric two-wheelers. The firm said its Assets Under Management (AUM) and deployments grew more than four times in the last six months.

“The space is getting very attractive. Last year we saw our AUM at around Rs 30 crore and deployments would have been around Rs 25 crore due to Covid as well as low EV penetration.

Mehta said that while the average interest paid by those availing loans for conventional vehicles with internal combustion engines will be a notch lower than EV loans, the numbers will be coming down as the segment gains more usage.

In fact, last week a group of EV financiers launched a non-government industry body called the Electric Mobility Financiers Association of India (EMFAI), which aims to ensure faster EV adoption in the country by focusing on funding EV purchases and other products and services relevant to the ecosystem.

Data sourced from EMFAI shows that in the last year, the number of EV finance players has grown from four to 13, and overall disbursements have grown 50 percent to Rs 1,000 crore, with investments including debt and equity at Rs 1,000-2,000 crore. 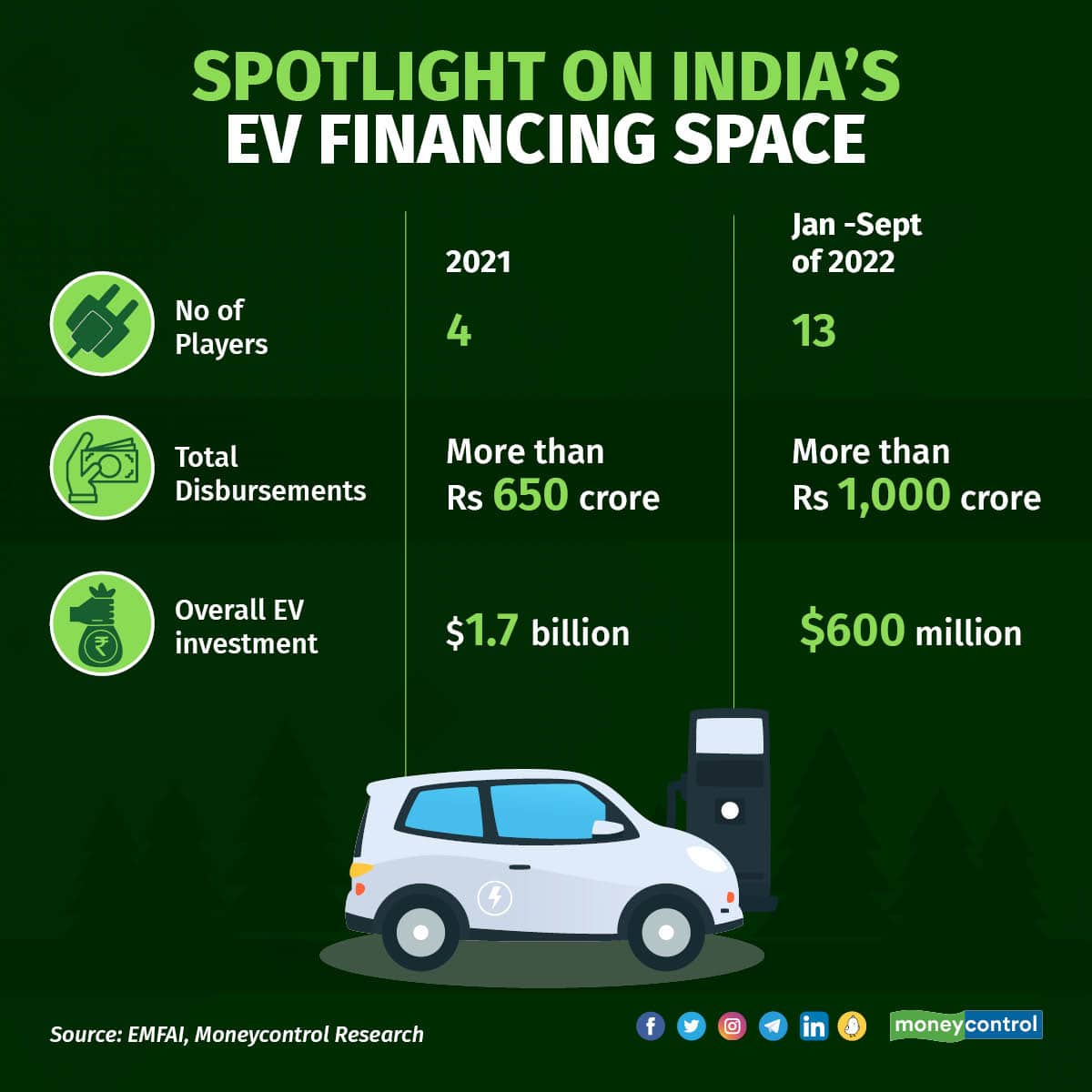 “Access to capital is one of the largest constraints for large-scale adoption of electric vehicles in India. Members of EMFAI are committed to providing this access not only for electric vehicles but also for associated infrastructure and ancillary products,” said RevFin’s founder and CEO Sameer Aggarwal, who is also the founding president of EMFAI.

Three Wheels United (TWU), a Bengaluru-based EV finance firm, raised $10 million as a part of Series A funding led by Delta Corp Holdings with participation from new and existing investors.

“We are targeting an AUM of $100 million and we are also planning to be profitable… The EV finance segment is also getting a lot of interest among investors,” Cedrick Tandong, co-founder and CEO said in an earlier interaction.

“With around $1.7 billion invested in 2021 and over $600 million already invested in 2022, it is a promising time for the Indian EV startup ecosystem which includes the financing sector as well,” said Anup Jain, managing partner, Orios Venture Partners, an early-stage venture capital firm.

However, NBFCs said the debt market has more opportunities and options to raise funds.

“While VC investment is growing in the EV finance segment, I feel it is still at a nascent stage…We wanted to raise around $250 million; however, we are getting more interest only from institutional debt players,” said a top EV finance startup on condition of anonymity.

RevFin’s Aggarwal echoed similar views: “We will be raising more money in the coming months… However, equity investment is still in the early stages and growing. More debt firms are keen on this segment.”

“We have many investors waiting to finance but it is important to choose the right partnership in this,” TWU’s Tandong told Moneycontrol.

Venture Debt firm Stride Ventures said that EV segments like OEMs, EV Financing,  infrastructure, and mobility solutions are all attracting financing and funding interest in 2022 with the growing scale and value proposition.

"We at Stride are extremely bullish on the future of the EV category and plan to invest over 100 crores over the next 3 years," said Ishpreet Singh Gandhi, Managing Partner & Founder of StrideVentures.

Large NBFCs and banks are eyeing the segment

While large NBFCs and banks are yet to get into the EV financing segment, many are partnering with NBFCs to fund EVs.

“While I cannot name them, at least three or four large banks have approached us for partnerships, mainly to understand the segment, and are very keen on getting into EV financing,” Mehta said. In fact OEMs and EV logistics firms are also offering micro-credit to the gig economy drivers to purchase cars/bikes.

"Our tech stack also helps delivery executives to adopt an EV with no down payment and with a small EMI/rental plan which gives him the bike access, like a micro-leasing arrangement" said the founder of Zypp, Akash Gupta.

NBFCs in the EV finance segment Moneycontrol spoke to said that many IT and food delivery startups are reaching out for converting their delivery vehicles into eco-friendly fleets.

“We see the use cases shifting from just shared mobility or household personal use to diagnostics labs, food delivery firms approaching us for EV financing,” said Akasa’s Mehta.

As the EV finance segment is still at an early stage, there are some challenges in debt collection.

“Calculation of credit score or debt collection, in general, is a little challenging, the probability of bounce is higher. Many EV three-wheeler owners don’t have proper GPay (Google Pay), PhonePe and other UPI payments set up, they still rely on traditional methods,” Mehta said.

RevFin’s Aggarwal said that digital adoption is still at a nascent stage, especially within the three-wheeler segment.

“There are not too many challenges from a customer perspective as most of them are daily-wage earners and their incomes are in cash. Bringing them into the digital economy to fast-track loan disbursement is the challenge,” he said.

Despite the EV segment growing at a faster pace, the direct-to-customer, two-wheeler segment is facing growing backlashes amid safety concerns. On Tuesday, reports emerged stating that around six people were dead after a fire broke out in an electric scooter recharging unit at a hotel in Secunderabad.

In fact, the Centre has also issued guidelines on EV testing and EV battery manufacturing and testing. The amendments have been carried out in the automotive industry standards (AIS) for motor vehicles with less than four wheels and with an electric power train.  Electric two-, three- and four-wheelers, passenger, as well as goods vehicles, will be covered under the new norms.
Invite your friends and family to sign up for MC Tech 3, our daily newsletter that breaks down the biggest tech and startup stories of the day
Bhavya Dilipkumar
Tags: #Akasa #EV #financing #Mufin #Revfin #Zypp #Zypp Electric
first published: Sep 13, 2022 08:21 am