Bengaluru continues to dominate in terms of funding deals, with the startups in the city attracting $4.6 billion across 121 deals in Q1 of 2022

Indian startups have raised over $10 billion in the first three months of 2022 from investors, reflecting the sustained pace of funding deals in the country, despite worries that global headwinds could slam the brakes on the momentum.

Startups raised around $10.5 billion across 329 deals in the first quarter of 2022, at par with the $10.4 billion investment from 315 deals in the previous quarter, but almost double of $5.7 billion from 225 deals in the year-ago period, according to the data shared by Venture Intelligence with Moneycontrol.

While the deal volume is still going up, it is likely that a major chunk of these deals could be closed late last year and announced during the first quarter. The impact of the global headwinds in early 2022 along with a sharp decline in the stock prices of domestic and global tech companies on private fundraising are likely to be felt in the upcoming quarters. 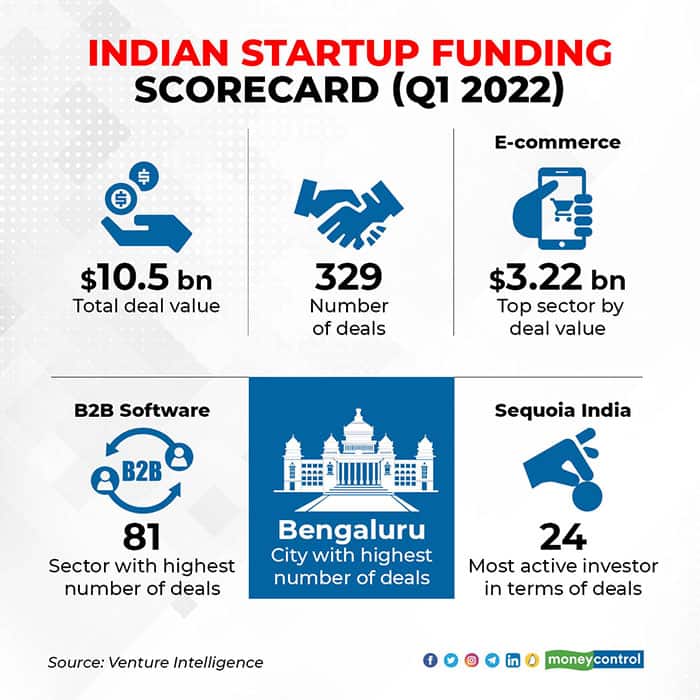 Venture Intelligence founder Arun Natarajan noted that while the quarter-on-quarter comparison in terms of startup funding is flat, there are multiple signs of a churn since mid-February.

"With the steep decline in technology stock prices in the US as well as the newly IPO-ed Unicorns in India, the aggressive funding of late-stage tech startups witnessed in 2021 is likely to take a pause, with investors becoming more selective," Natarajan said.

"On the positive front, the vibrancy in the early stage - both in terms of new sectors like Web3 throwing up new opportunities and trend setting investors like Tiger Global moving into this segment of the market - looks set to continue," he added.

These comments tie in with what various stakeholders in the startup ecosystem have been saying in recent weeks, with deals taking longer to close and some late-stage deals coming under pressure from the funding slowdown.

On March 31, Arpan Sheth, partner at Bain & Company, said that investors are likely to double down on larger rounds in quality assets and focus heavily on leaner unit economics - with a slower pace of deal-making and rationalised valuations.

In a recent episode of Moneycontrol Masterclass, Madhukar Sinha, general partner at India Quotient, said that investors are increasingly focusing on the real health of the company and asking questions regarding metrics that were hidden behind the veil of growth.

Sequoia India was the most active investor in Q1 2022 with 24 deals, followed by Tiger Global with 22 deals and Accel India with 16 deals.

That said, the B2B software sector saw the highest number of deals with 81 deals in the sector in Q1 of 2022, followed by 65 in fintechs and 52 in e-commerce.