India has become the preferred investment destination for various reasons – low-interest rates in the US, an expanding online consumer base, a listing of startups and China’s crackdown on tech companies

Indian internet startups raised over $20 billion from global investors this year, shattering the previous record as they gained from a pandemic-led digital adoption, record stock market listings, and regulatory crackdowns in China.

Companies raised $20.2 billion across 576 deals, surpassing the $13 billion from 878 deals in 2019, according to data from Venture Intelligence. The average deal size, too, more than doubled to $35 million this year, indicating the willingness of investors to take more risks on fledgling startups in their pursuit of the next multi-billion dollar outcome.

The $20 billion figure was breached when manufacturing startup Zetwerk raised $120 million from investors for a valuation of $1.4 billion, the data showed. The year’s largest deals include online learning firms Byju’s and Eruditus, food delivery firms Zomato and Swiggy, and payments firm Pine Labs, which raised a combined $3.8 billion. 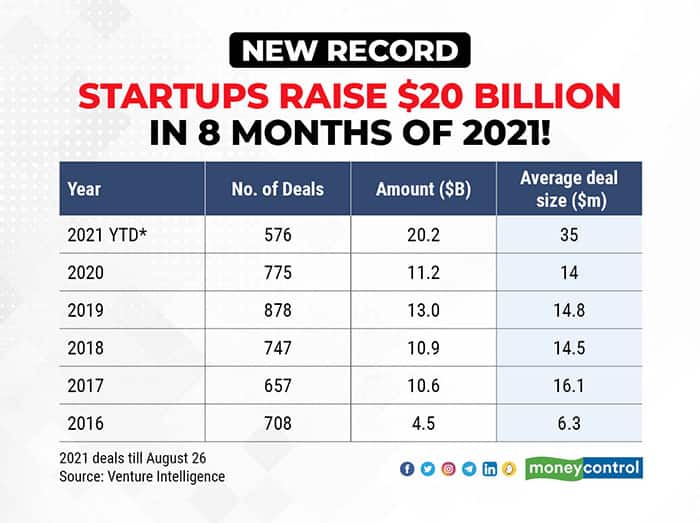 While market-leading startups have raised large rounds of over $500 million in previous years, the sheer number as well the plans make this year unique. Zomato’s stellar listing, along with the hotly anticipated listing of Nykaa, Policybazaar, Paytm and others make investors believe that such a funding boom may not be a one-off.

“I think this (kind of funding) is the new normal. So far, the money was not flowing into India the way it was in the US or China because of the lack of exits. That’s finally being fixed. Money is going back to investors,” said Tarun Davda, managing director at Matrix Partners India, an early-stage fund. For years, investors have bet that India’s massive population will buy and use online services, a trend that was restricted to urban areas and is now changing, with cheap mobile data and a pandemic that forced many people to use digital services frequently.

“There was a time when a company did Rs 10-20 lakh of monthly revenue. We thought they had scale as an early-stage venture. Today, even Rs 2-3 crore a month is becoming common. We have been waiting for market depth for 15 years and it looks like it is finally here,” Davda said.

The funding boom appears to be a perfect storm of a number of factors – low-interest rates in the US leading to more investments in emerging markets, an expanding online consumer base in India, market leaders listing on the stock exchanges and China’s crackdown on technology companies making India the next favorable destination for investors.

Digital adoption accelerated during the pandemic across segments. For consumer brands, fintech and even API software firms, demand grew 3-4 times more than planned. The China situation also made India a more attractive destination for global investors.

“With the ban on apps for national security purposes alongside this has become India’s opportunity,” said Pranav Pai, managing partner at 3one4 Capital, an early-stage investor.

The unprecedented funding boom is also notable because it comes after two small but successive slowdowns – towards the end of 2019 when investors were growing weary of large loss-making internet companies and in early 2020 when the first wave of Covid-19 shut down businesses and economies for months.

Startups that would have raised $5 million two years ago are raising $30 million today, investors said.

To be sure, the funding surge doesn’t mean every startup is getting money. Investors seek certain types of entrepreneurs – experienced, with stints in startups or from top backgrounds – a class that has blossomed in recent times.

Well-known and well-networked founders are getting offers for millions of dollars in investments after quick phone calls and sometimes an entire deal – a process that could take months – is wrapped up over a weekend. Funding typically works in boom-and-bust cycles and therefore, by design, this level of frenzied activity will end in the months ahead, but there are those who contend that this boom represents India’s elevated status in the technology economy.

“This kind of (funding) growth may not always continue, but it is still a big moment. We are seeing significant growth off a higher base for the right business models,” Davda said.
Invite your friends and family to sign up for MC Tech 3, our daily newsletter that breaks down the biggest tech and startup stories of the day