Govt issues draft e-commerce policy in a bid to tighten rope for Amazon, Flipkart in India

The government has tried to tighten the norms for displaying the country of origin, ensure that e-tailers like Amazon and Flipkart do not use the data collected through their business for unfair advantage and curb any possible links these companies may have with the traders on their platforms.

Amazon's counsel also asked for his matter to be tagged along with Flipkart's appeal.

In what can be termed as a dynamic set of proposals, the government has ensured that it comes heavily on those circumventing the laws for once all.

In a draft note prepared by the Consumer Affairs Ministry, the government has tried to tighten the norms for displaying the country of origin, ensure that e-tailers like Amazon and Flipkart do not use the data collected through their business for unfair advantage and curb any possible links these companies may have with the traders on their platforms.

Coming heavily on the issue of the Country of Origin, the government has said that e-commerce companies will now mention the name and details of any importer from whom it has purchased such goods or services. They will also have to provide a filter mechanism on their websites from where customers can figure out the origin of the products quickly before making a purchase.

In a major push for domestic products, it has also suggested that the companies should provide alternative suggestions to customers before he/she makes a purchase to ensure fair opportunity for "domestic goods".

The draft has proposed that e-commerce companies will also not be allowed to organise flash sale of goods bringing under question a lot of sale festivals organised throughout the year by etailers such as Amazon and Flipkart.

Flash sale essentially means a period during which products are sold on a highly discounted price.

Trying to bring a closure to the constant allegations of preference given to a select set of vendors by the e-commerce companies, the government is also trying to ensure that no logistics service provider of a marketplace e-commerce entity shall provide differentiated treatment between sellers of the same category.

Companies will be termed related parties if they have 10 percent or more common ultimate beneficial ownership.

Enterprises will also be considered related to each other through a common chain of directors or managing partners, shareholders, where such shareholders hold not less than 5 percent of the shareholding in the related enterprises.

As per the draft, no marketplace e-commerce entity will be able to sell goods or services to any person who is registered as a seller on its platform. This clause essentially bars e-tailers from running wholesale businesses through which they are alleged to be selling subsidised goods to their preferred vendors. These vendors in turn sell the goods to customers through the marketplace at a discounted price.

The government is trying to address the burning issues of preferred vendors and online discounting which have marred the growth of offline retailers in India.

In India, e-tailers are known to be having a set of preferred vendors who get a majority of the business generated by these companies.

In 2018, the government had come up with Press Note 2, revising the then-existing Press Note 3. It asked the marketplaces to ensure that they will not sell the products of their group companies on their platforms.

Following the clarification, Amazon did a rejig in its structure in India. 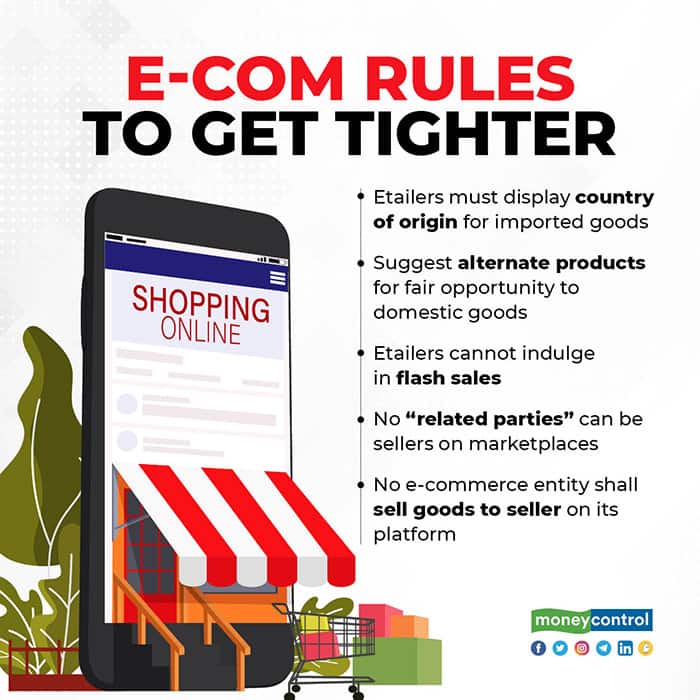 Following this, Cloudtail ceased to be an Amazon group company, making it compliant with the rules on the papers but yet not serving the purpose with which the norms were straightened.
The government has sought views from stakeholders by July 6 on the draft Consumer Protection (E-com) Rule 2020.
Amazon declined to comment for the story. Flipkart did not respond to the media query.