Despite input-cost risks, analysts and companies are optimistic about revenues next fiscal, though there is some concern about the margins

The resurgence in domestic demand has come from end-user segments that make up for 55-60% of the total demand, such as from agrochemicals, dyes and foods and fragrances, according to Crisil. (Photo by Graham Walker/Pexels)

Input costs are beginning to weigh on the specialty chemicals sector. While sales and profit grew impressively year-on-year, the numbers show a weakening of pace quarter-on-quarter.

Sales grew 28 percent and profit after tax (PAT) went up by 34 percent year on year, but sequentially, sales contracted by 0.34 percent and PAT grew only 8.3 percent.

The sector’s profit margins have improved year on year. Operating profit margin rose to 16.31 percent this March quarter from 16.26 percent in the year-ago period and PAT increased to 10.11 percent from 9.51 percent.

The margins have picked up from a dip last quarter when operating profit was 15.5 percent and PAT margin 9.3 percent.

Analysts have pegged the slowing down to rising raw material costs and logistical challenges arising from China’s zero-Covid policy.

Both saw healthy growth in revenues year on year (YoY)—Aarti saw a 45 percent rise over last March quarter, while Atul posted a 22.8 percent rise during the period. But revenue dropped quarter on quarter–Aarti’s was down 26 percent, while Atul’s sales shrank by 0.7 percent.

According to an IIFL report, Atul’s raw material cost had gone up 30 percent year on year. 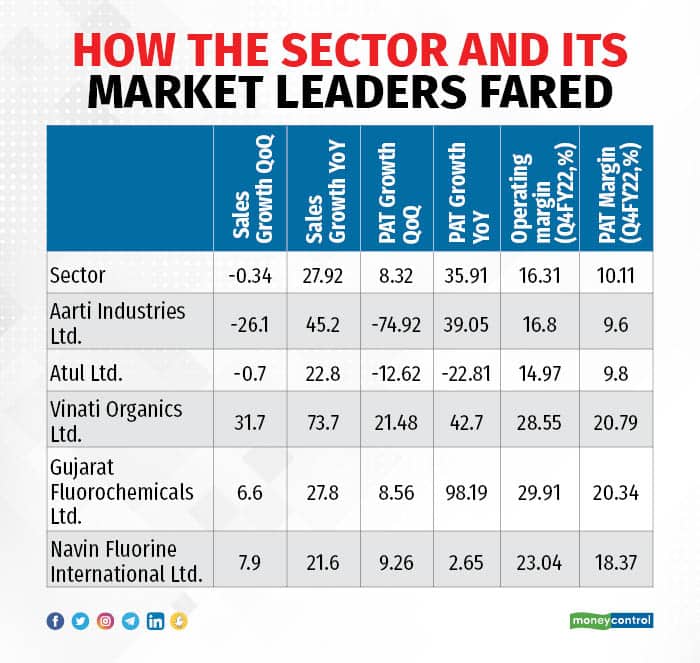 Aarti Industries has corrected 6 percent after the quarterly results announcement, with investors unhappy about its FY23 guidance.

According to Kotak Institutional Equities, the subdued projection is because of a strong base in FY22, from Bayer AG’s compensatory receipts; increased overheads on projects that are to be commissioned this year; and the second long-term contract (worth revenues of around Rs 5 billion per annum) coming with relatively lower margins—likely below 14-15 percent.

Crisil estimates companies’ capital spending to surge by 50 percent to Rs 15,000 crore through 2023.

“A sizeable portion of this spend will be for backward integration, import substitution and to meet increased demand for exports,” it said in its March report. Companies have healthy cash flows to fund this capex, therefore, reliance on the incremental debt will be low, it said.

The resurgence in domestic demand has come from end-user segments such as agrochemicals, dyes and foods and fragrances that make up 55-60 percent of the total demand, Crisil said.

The specialty chemicals sector is also seeing the share of exports in its revenues rising, with MNCs looking to diversify away from China.

The trend is expected to continue in Q1FY23 and through FY23. “Countries want to have two to three suppliers now and many countries are looking at India as a potential player because of India’s cost-competitive manufacturing and technological knowledge,” said Arun Malhotra, founding partner and portfolio manager at CapGrow Capital Advisors.

Another significant trend that will play out next fiscal will be the import-substitution one, Malhotra said. The Indian government has been pushing companies to reduce their dependence on imports and find domestic alternatives.

Malhotra said the Russia-Ukraine war and input costs could continue to act as headwinds in the next fiscal but higher demand from domestic and international players should keep the sector’s growth buoyant.

In FY23, Crisil expects the sector’s revenue to grow 14-15 percent and the margins to remain impacted by higher input costs.

“Revenue will continue to see healthy growth, as demand remains strong. Margins may be impacted a bit due to higher input prices, which will get passed on with some lag,” said Anuj Sethi, senior director at Crisil Ratings.

How a multibagger fared

Gujarat Fluorochemicals–which has gone up by more than 200 percent over the last one year–posted a revenue of Rs 1,074 crore in Q4FY22, which is a 28 percent growth YoY and 7 percent growth QoQq.

Its PAT was at Rs 218.5 crore, which is a 98 percent growth YoY and 9 percent growth QoQ. Its margins improved to 30 percent (operating profit margin) and 20 percent (PAT margin) from 23 percent and 13 percent respectively.

“The growth was mainly led by robust demand for its fluoropolymers(PTFE), followed by volumes and prices of Ref gas which has marginally improved during the quarter. For FY22, the consolidated revenue stood at INR 39,536 (+49.16 percent YoY),” said a report from KR Choksey, which has retained its “buy” recommendation and revised the target price upwards to Rs 3,215.

ICICI Securities expects the company to continue posting strong growth in FY23, from a significant ramp-up in sales in some products, price increases and capacity additions.