Bhalchandra Shinde, Research Analyst, Anand Rathi Shares said, for one-year the earnings potential of graphite electrodes makers looks good because most of the contracts are fixed-price contracts for them.

Graphite electrodes maker stocks have been under pressure of late but it was a space that was doing extremely well. However,  HEG has corrected 20 percent, after trebling from its recent highs on buzz that the prices of graphite electrodes have declined globally.

However, Ravi Jhunjunwala, Chairman & MD, HEG said on ground they haven't seen any decrease in prices, in fact they have seen consistent increase in prices even in the last 2-3 weeks.

Explaining the reasons spike in prices of electrodes, Jhunjhunwala said it is basically due to mismatch in demand and supply.

In the meantime, China has also closed 120-140 million tonne of steel capacity in the  last 12 months, creating a positive demand for their products, said Jhunjhunwala. 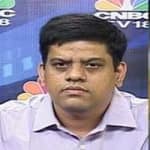 when asked if they saw China adding capacity of graphite electrodes going forward, he even if a capacity of 15000 to 25000 tonnes from China were to come back, it would be very little addition in the current scenario where the demand is of 100000-120000 tonnes, said Jhunjhunwala.

Talking from stock valuations point of view, Bhalchandra Shinde, Research Analyst, Anand Rathi Shares said at least for one-year, the earnings potential for graphite electrodes makers looks good because most of the contracts are fixed-price contracts for them. Moreover, with constraint in needle coke, these prices are expected to remain for at least one-two years, Shinde added.

Therefore, one will see a continuity in profitability and sales being robust for the graphite electrode players, at least for 1-2 years, said Shinde.

According to Shinde, after the recent correction in the stocks, there is still upside potential for the graphite electrodes makers because they are more dependent on sales realistions and most of these players have been signing contracts at USD 8500/t. So looking at these realisations and needle coke prices, the EBITDA for them could be in range of USD 3000-3500/t, leading to good upside of 25-30 percent for each of these players, he added.
CNBC-TV18
Tags: #business news #Graphite Electrodes #HEG
first published: Nov 29, 2017 11:14 am