As VW’s range-topper in the country, the Tiguan represents a certain European standard of luxury minus the pomp and flash possessed by its more ostentatious siblings and other Teutonic counterparts

The Volkswagen Tiguan was always a unique proposition. As a dressed-down alternative to the likes of the Audi Q3, with which it shares plenty, the Tiguan is a bargain. Compared to other premium SUVs like the Jeep Compass, with which it shares similar levels of functionality, its pricing has always been less than ideal. As VW’s range-topper in the country, the Tiguan represents a certain European standard of luxury minus the pomp and flash possessed by its more ostentatious siblings and other Teutonic counterparts. And it’s this clinical, no-frills appeal of the Tiguan that’s always endeared it to me.

Also Read: How the VW Polo elevated the humble hatchback

Over the years the Tiguan has offered plenty. For a brief period, while VW India worked on bridging the BS6 emissions gap, a 7-seater, CBU version called the Tiguan Allspace, plied the roads. The third-row was only suitable for those willing to sever their legs, so, thankfully the more honest and sensible 5-seater version has returned, this time exclusively with a 2.0-litre TSI petrol engine from the Allspace. 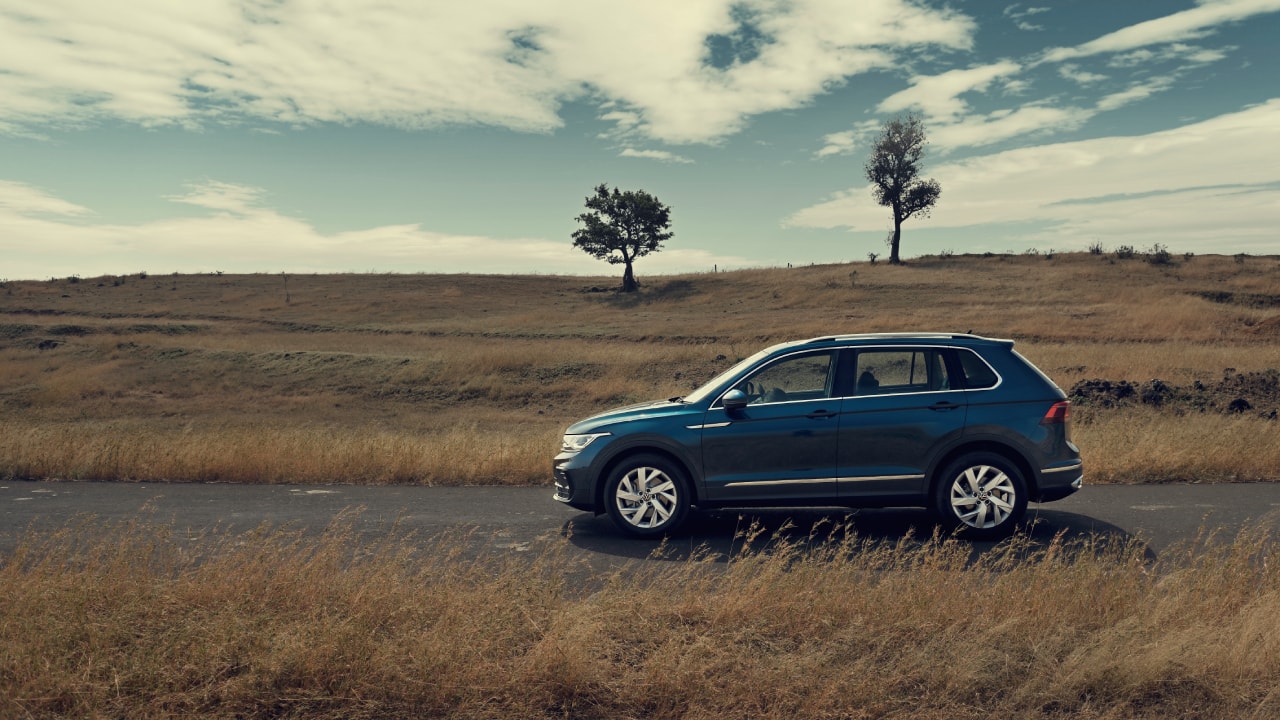 The changes have also found their way to the car’s exterior, with a sleeker form replacing the rather humourless boxy design of the previous model. The headlamps are narrower, with sharper edges and, mixed with the new grille, the Tiguan’s got a Passat-like front-end giving it a softer, more distinguished appearance. Even the bonnet has slightly curvy edges which amplify the Tiguan’s softroader credentials. The sharply-creased shoulder line remains similar to the old design; the monotony interrupted by a fresh set of 18-inch alloys. There are alluring bits of chrome to be found all around the car, but this also includes a set of faux exhaust tips on the rear bumper, which, as a general design rule, should be done away with. On the whole though, this is still a very handsome SUV, any way you look at it.

The all-black, all-business interiors have also received a few mild tweaks, for better and worse. The steering design has been updated, there’s ambient lighting, Type-C charging – the whole modern luxury starter kit, minus wireless phone charging and a 360-degree camera. The rotary temperature control knobs have been replaced by a touch enabled slab which is detrimental to the car’s ergonomic appeal not because of how it feels to use, but because the whole unit is more analogue in appearance, without the functionality of good old-fashioned knobs. The Galactic Empire vibes of the all-black upholstery aside, the Tiguan has a richly appointed cabin, featuring a panoramic sunroof, plenty of legroom. Notwithstanding the absence of a few contemporary tech staples (like electronic functions for the front passenger seat), the interior of the Tiguan is lavished with high quality materials, vienna leather and a lucid, easy-to-operate interface. 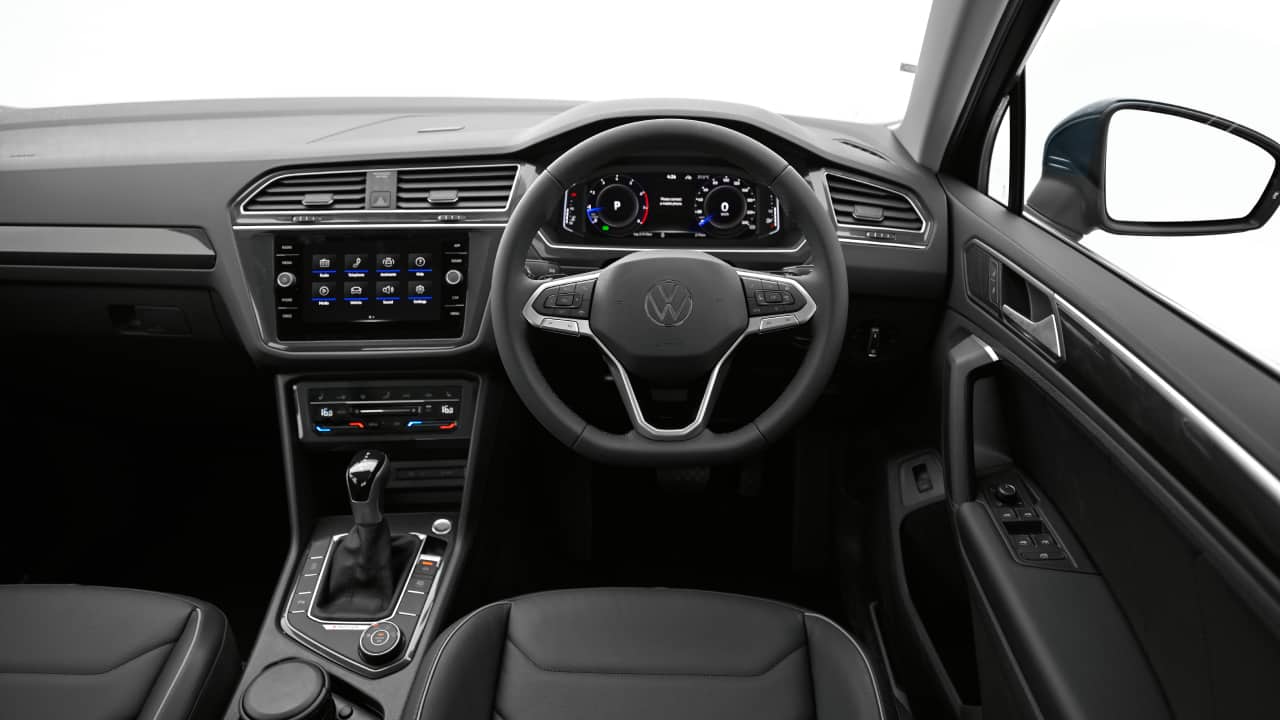 Under its business-end lies a 2.0-litre TSI petrol, one of VW’s best offerings that also finds its way in the Octavia vRS and several other cars from the VW stable. This means you now get 188hp and 320 Nm of torque – power levels which are befitting a car of its size and stature. The engine was brought ashore, courtesy the Tiguan Allspace, but has thankfully managed to find its way in the five-seater as well, adding a spring in its step and going a long way in justifying the Tiguan’s Rs 31.99 lakh price tag.

The Tiguan may not make much sense when parts of it are individually compared to its peers. Many SUVs which are considerably cheaper offer AWD and all the multimedia features one can have. But the Tiguan is greater than the sum of its parts and that has always been central to its appeal. I’ve always held on to the notion that it is, in fact, all the luxury you really need from a car. Despite being a relatively high riding SUV, the Tiguan is quite a performer. Cornering is flat to a level that truly boggles the mind. The only downside is that this dynamism does result in a slightly stiffer suspension setup which is eager to translate bumps on the road in a sharp, precise manner. Still, aided by a smooth 7-speed DSG gearbox, the Tiguan remains a delight to drive. Its steadfast adhesion and on-road stability at high speeds is right up there with the best. None of its contemporaries come close in terms of driving dynamics. There’s a Drive Mode Selector knob for varying terrains, but this is still predominantly a front-wheel biassed, AWD machine.

VW’s proprietary dual-clutch gearbox is, of course, smooth as ever. Upshifts are practically seamless, but mash the throttle and the unit does take a second to catch its breath. Once you calibrate the right amount of throttle input, the Tiguan’s considerable mid-range torque makes itself apparent and from then on, it’s a smooth ride. Triple digit speeds, sharp cornering – nothing fazes the Tiguan. Everything has been calibrated to make it ideal for our cities (save for the stiff suspension settings). Visibility from the driver’s seat is excellent, plenty of performance on tap, both the instrument cluster and the new 10-inch infotainment screen are clear, legible and easy to navigate. If owning a German SUV is your thing, the Tiguan is good value-for-money. Despite not possessing the badge value of an Audi, the 2021 VW Tiguan is still all the car you really need, and then a bit more.