A probable postponement of sale of items for which tax rate was reduced by the Council in its July meeting, as well as seasonal factors, are the main reasons for the ‘slight’ dip

Revenue collection from Goods and Services Tax (GST) declined to Rs 93,960 crore in August from Rs 96,483 crore last month, the lowest in the current financial year 2018-19, data released by the finance ministry showed.

A probable postponement of sale of items for which tax rate was reduced by the council in its July meeting, as well as seasonal factors, are the main reasons for the ‘slight’ dip, the ministry said today.

On July 21, the GST Council announced its decision cut rate of more than 80 items across various tax slabs. The rate cut was, however, effective from July 27.

“Since it would have taken some time for the market to pass on the benefit of reduced taxes, consumers would have postponed their decision to buy expecting the benefit,” the ministry said in a statement.

The government believes that the actual impact of reduction in tax rates will be visible from September as the rate cut was effective only in the four days of July.

Past trend shows that indirect tax collection in July is 8.2 percent of the annual collection, while that of August is even lower at 7.7 percent, the government said, adding that this is another reason for lower collection during the month of August as compared with July.

Business activity generally picks up in the second half of the year, which leads to higher tax collection, especially during the festive season that begins in October.

The government has set the target of over Rs 12 lakh crore for the financial year 2018-19, which can be achieved if the average monthly mop up is around Rs 1 lakh crore. 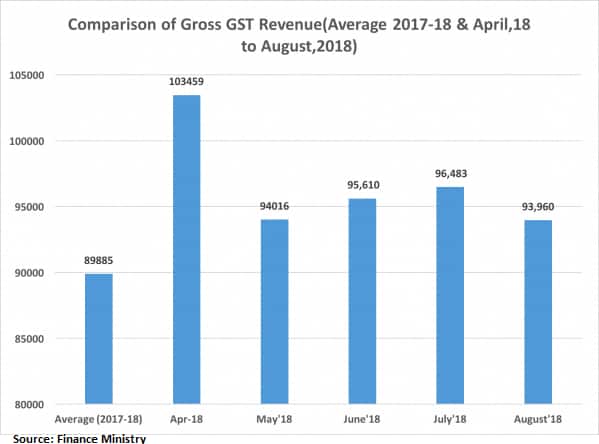 Till now (April-August), the government has collected Rs 4.83 lakh crore revenue from GST. Achieving the revenue collection target is crucial as it has a direct bearing on the fiscal deficit, which is a gap between government’s revenue and expenditure.

Out of the total collection, Central GST (CGST) was Rs 15,303 crore, with states garnering Rs 21,154 crore State GST (SGST). Rs 7,628 crore was received as cess, with Rs 49,876 crore collected as Integrated GST (IGST), which is levied on inter-state supply of goods and services and is divided between states and the Centre.

The total number of GSTR 3B or summary form-based returns filed for the month of July up to August 31, was 67 lakh, slightly higher than 66 lakh returns filed a month ago.

The last date of filing return of July in Kerala was extended upto October 5 due to massive floods. For the bi-monthly period June-July, compensation of Rs 14,930 crore has been released to the states.
Shreya Nandi
TAGS: #Business #GST
first published: Sep 1, 2018 07:49 pm