Silver Lake and its co-investors will invest another Rs 4,546.8 crore in Jio Platforms, the second investment by the private equity giant in Reliance Industries' digital unit in over a month and the second such deal in less than 24 hours.

On May 4, Silver Lake, the world’s largest tech investor, invested Rs 5,655.75 crore in Jio.  The aggregate investment by Silver Lake is now Rs 10,202.55 crore for a 2.08 percent stake in Jio Platforms, which runs movie, news and music apps as well as the telecom enterprise Jio Infocomm. Silver Lake is the world’s largest tech investor and has a terrific track record of investing in some of the largest and successful tech companies globally such as Twitter, Airbnb, Alibaba, Dell Technologies, ANT Financials, Twitter, Alphabet’s Waymo and Verily, among others.

Key things to know about Silver Lake:# Silver Lake made its debut investment in India in 2013 when it picked up a minority stake in Bengaluru-based Ekta Software, which builds software for commodity trading.

# The firm was launched in 1999 as a specialist firm focused on technology company investments.

# It sold Skype to Microsoft for $8.5 bn in 2011 in one of the most successful private equity exits in history. 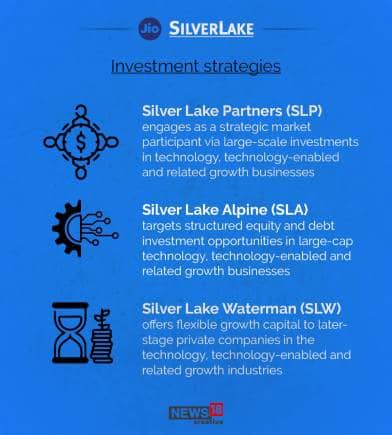