Idea, Vodafone to merge: Start of end of tariff war?

The merger could signal the beginning of the end of cheap tariffs with fewer players left in the fray.

Ending months of speculation, the Idea Cellular board on Monday approved the merger of Vodafone India and its subsidiary Vodafone Mobile Services with itself, in the process creating the country's largest telecom entity. The merger will be effected through the issue of new shares in Idea to Vodafone.

The deal has been arrived at with an implied enterprise valuation of Vodafone India Rs 82,800 crore and that of Idea Cellular at Rs 72,200 crore. 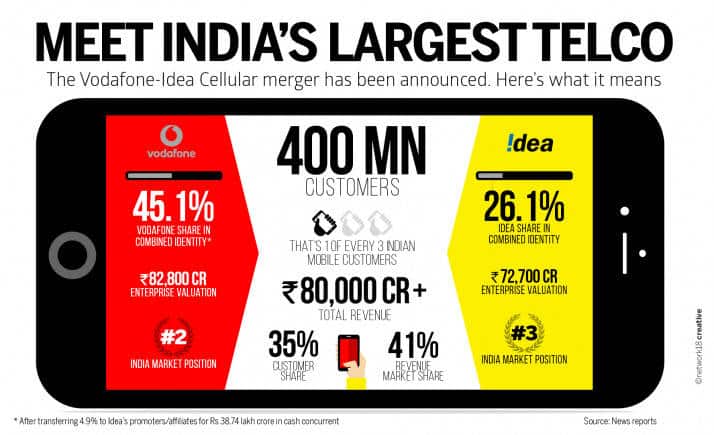 A back of the envelope calculation by Moneycontrol Research estimates the per share value of the combined entity at Rs 109, based on the value of the 4.9 percent stake sale by Vodafone to Idea promoters.

Analysts see the move as an outcome of the fierce competition in the telecom sector, which has intensified after Reliance-promoted Jio entered the fray last year.

At a public event last week, Gopal Vittal, Bharti Airtel’s Managing Director for India and South Asia said the telecom industry’s financial health was at its weakest ever with a massive debt burden that exceeded Rs 4.5 lakh crore.

The combined debt of the Vodafone-Idea stands at Rs 1.07 lakh crore.

The Idea release said the merger will result in savings of around Rs 14,000 crore annually by the fourth full year post-completion through sharing of resources — staff, network infrastructure and spectrum.

The deal is expected to be closed sometime in 2018. In the three years from closure of the deal, the Aditya Birla Group has the right to buy upto 9.5 percent stake from Vodafone at Rs 130 per share to equalize the stakes of both partners. If after five years, the shareholdings of both partners are not equal, Vodafone will sell down its stake to the level held by the Idea promoters.

Until the equalization of stakes is achieved, the voting rights on the additional shares held by Vodafone will be restricted.Both Vodafone and the AB Group have the right to nominate three directors each on the board.

Idea said the combined entity will hold 1850 MHz of spectrum, sufficient to compete effectively with the other major operators in the country.

At a press conference to discuss the details of the merger, Aditya Birla Group Chairman Kumar Birla tried to downplay fears of job lay offs following the merger.“For a company with such size there will be enough growth opportunities; I don't expect a significant downside,” he said in response to a question.

“For a company with such size there will be enough growth opportunities; I don't expect a significant downside,” he said in response to a question.

Vodafone Group CEO Vittorio Colao said both brands would exist after the merger. “Both brands will continue to exist and we will leverage on both brands,” he said.

From a consumer standpoint, the merger could signal the beginning of the end of cheap tariffs as fewer players will be left in the fray over the next few years.

Last month, India’s largest telecom operator Bharti Airtel informed the bourses on Thursday that it will acquire Telenor India’s assets. The exit of the Norwegian telecom company from India comes at a time when new entrant Reliance Jio has acquired 100 million users.

But consolidation may also result in job losses as companies cut costs. Industry body COAI expects a 30 percent reduction in jobs over the next few years.

Talks of consolidation in the sector have been doing the rounds following a poor response to the spectrum sale last year which earned the government only a fraction of Rs 5.63 lakh crore it had envisaged. New entrant Reliance Jio’s aggressive push to gain market share is also seen as a major trigger for consolidation in the sector.
Tags: #Aditya Birla group #Business #Companies #Idea Cellular #reliance jio #Telecom consolidation #Vodafone India #Vodafone-Idea merger
first published: Mar 20, 2017 10:20 am