Noida’s infamous twin towers will become part of history on August 28. While the blast will take somewhere around nine to 13 seconds, preparations for the final explosion have taken months. Here’s a look at five key steps that sets the stage for the final blast.

1. Drilling holes and wrapping geotextile fibre: Supertech’s twin towers are around 100-metres tall. While Apex has 32 floors and is 103 metres tall, Ceyan is 97 metres high with 29 floors. While the basement, ground and first floors are the primary blast floors, every alternative floor is either the primary or secondary blast floor. Since it's a scientifically and strategically planned demolition, first holes are drilled in columns to make space for explosives. A total of 9,640 holes have been drilled in 2,650 columns from the top to the bottom of the buildings. Every alternate floor where the drilling was done, was wrapped with geotextile fibre to prevent chunks from flying out during the blast. 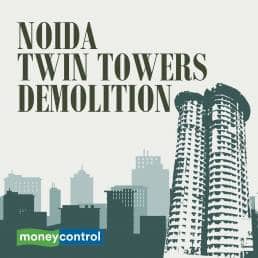 2. Test Blasts: A test blast was conducted on April 10 at 2:30 pm at Apex tower to determine the exact quantity of explosives needed to bring down the building. Readings of vibrations and pollution caused during the test blasts were recorded. Edifice Engineering, the company responsible for carrying out the demolition, later said in its report that the twin towers structure was stronger than anticipated. It later concluded that 3,700 kg of explosives would be required to bring down the towers.

3. Charging of towers: Central Building Research Institute (CBRI), which also studied the buildings, gave the go-ahead for charging the building with explosives in its report on August 11. The rigging of the building started on August 13. The charging was carried out from 7am to 7pm every day and was completed on August 22. A team of 10 Indian blasters, seven blasters from overseas, and 90 labourers worked together to complete the charging work.

5. Final checking and blast: After Edifice completed the interconnection work, the focus shifted to final checking to ensure that the blast takes place as planned. The final checking involved cross-checking for proper charging and interconnection. An electric wire will be used to trigger the blast from a distance of 100 metres on August 28 at 2:30 pm, which will reduce the twin towers to debris.
Moneycontrol News
Tags: #demolition #Noida #Supertech Twin Towers Demolition
first published: Aug 28, 2022 10:52 am