Rahul Bajaj | Helming Bajaj Auto for 49 years: A glimpse of his career

Niraj Bajaj, a director on the company's board, will take over as Chairman of Bajaj Auto from May 1.

Rahul Bajaj has stepped down as Chairman of Bajaj Auto, ending a 49-year stint as the head of the two-wheeler manufacturer.

The Bajaj group of companies was founded by Rahul Bajaj's grandfather Jamnalal Bajaj in 1926.

> 1958: Graduated from St Stephen's College, Delhi University with an Honours Degree in Economics.

> Bajaj also has a degree in Law from Bombay University and an MBA from Harvard Business School.

> 1968: Took over as Chief Executive Officer of Bajaj Auto

> 1979-80: Served as President of the Confederation of Indian Industry (CII).

> April 2021: Steps down as Chairman of Bajaj Auto. He will be the company's Chairman Emeritus for five years. 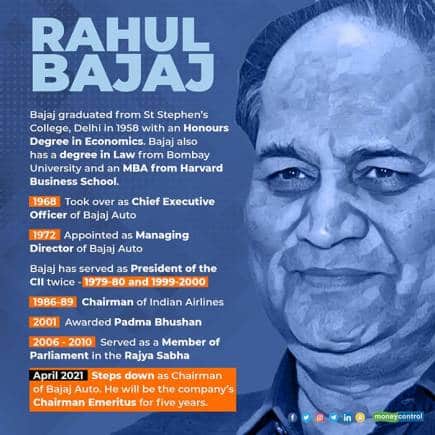