Will hike in fuel prices dent your finances?

If higher diesel prices push up the cost of vegetables in the rainy season, inflation may be affected later

Fuel prices have gone up across the country after Budget 2019 levied a cess of Rs 1 per litre and an equal amount of excise duty on petrol and diesel. Typically, when fuel prices rise, so does inflation, which not only makes goods and services expensive but also eats into investment returns. Higher the inflation, lower will be your real or inflation-adjusted returns. India’s retail inflation marginally accelerated to 3.18 per cent in June from 3.05 per cent a month ago. So should you be worried that it will increase further once the impact of fuel price rise plays out?

You shouldn’t, say experts, as the current fuel price rise won’t lead to a huge increase in inflation. “The increase in petrol and diesel prices may have a modest impact on discretionary consumption growth, particularly in urban areas," said Aditi Nayar, principal economist, ICRA Ltd, a rating agency.

That’s primarily because the fuel prices have corrected over the last few months. In fact, finance minister Nirmala Sitharaman, in her budget speech, mentioned that there was a case for reviewing excise duty and cess on petrol and diesel because crude oil prices had softened from their highs. Crude oil prices came down from more than $110 per barrel in mid-2014 to as low as $30 per barrel in early 2016. It again went up to about $85 per barrel around a year ago, but is at around $65 per barrel at present. The government’s move is expected to boost revenue collection to fund expenditure. 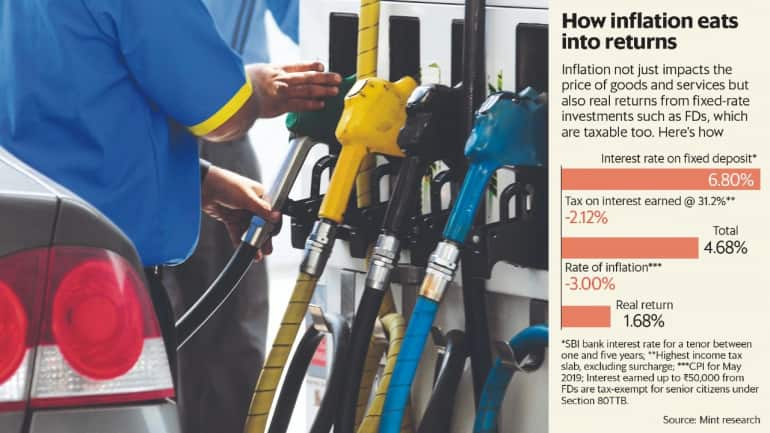 Let’s understand how rising fuel prices and, thereby, inflation, typically, affects the common man and why the impact won’t be much this time.

Inflation is mainly driven by commodity prices and change in currency rate. If the prices of commodities such as fuel go up, inflation tends to go up as well. On the other hand, when the currency depreciates, inflation increases.

There is a direct co-relation between the prices of diesel and vegetables and grocery items as fuel prices impact transportation cost. But the current fuel price rise is likely to impact the Wholesale Price Index (WPI) rather than the Consumer Price Index, which includes items and essential household items, given the higher weights of fuels in WPI. However, if higher diesel prices push up the cost of vegetables during the monsoon, retail inflation may be affected as food prices increase, added Nayar.

The other reason is the recent correction in fuel prices in the last few months. “For Indian consumers, retail petrol and diesel prices have been falling since April. With the budget announcement, prices rebounded about Rs 2.4 per litre across cities. But even with that, prices are lower on-year. So, inflation in these two will still stay negative for June and July," said Dipti Deshpande, senior economist, CRISIL.

Also, other market dynamics may not support an increase in inflation. “Since demand conditions are sluggish, manufacturers’ pricing power is weak and transmission of these hikes to consumer prices could be slow. The cumulative weight of petrol and diesel, and transportation segments which could see higher fares, is less than 5 per cent. So, for now, the impact on inflation is unlikely to be dramatic," said Deshpande.

The situation is not alarming at present, but if international crude oil prices go up, the dynamics may change. It’s not just the prices of vegetables and groceries that you need to worry about. Your investments, too, are under threat when inflation rears its ugly head. Inflation and tax can put dent real returns from investments, especially fixed-return products (see graph). Real return indicates the actual gain or loss, and is calculated by subtracting inflation from the interest rate.

While for short-term goals, you may not need to protect your investments from inflation, for long-term financial goals, it’s important to choose products that give you a real rate of return.
TAGS: #Budget #Budget 2019 #fuel prices #inflation
first published: Jul 15, 2019 10:45 am