Why you should skip this LIC SIIP

Looking to capitalise on mutual fund SIP’s popularity, LIC has launched a ULIP called LIC SIIP – Plan 852. But this is not your regular systematic investment plan

Systematic investment plans (SIPs) of mutual funds have been one of the most preferred ways of investing in the markets for the mass-affluent over the past few years. We have more than Rs 8,000 crore of inflows into MFs every month through SIPs. Now, the insurance industry wants a pie of it. The Life Insurance Corporation, which commands a share of 70 per cent of the insurance industry, has just launched a unit-linked insurance plan. It is called the systematic investment insurance plan or SIIP-Plan 852. A Ulip is a combination of investment and insurance.

Is this plan worth your while?

What does it offer?

While this policy aims to offer an insurance cover throughout the policy’s 10-25 year tenure, it also aims to invest a portion of your premium in equity and debt markets and make returns out of it. There are four options to choose from. The ‘Bond’ fund is the least risky of all and it invests its entire corpus in debt. The ‘Secured’ option invests 15-55 percent in equity and the rest in debt. The Balanced Fund would invest 30-70 percent in equity, while the Growth Fund would have the highest equity investment of 40-80 per cent with the balance being deployed in debt.

One can switch between these funds free of cost up to four times in a year, while Rs 100 per switch is applicable beyond that.

Whether you buy a mutual fund or an insurance policy, you incur a charge.

LIC SIIP starts by charging you a premium allocation charge (PAC). The PAC is charged upfront once you pay the premium. What remains, then, gets invested. Like all Ulips, LIC SIIP’s PAC is higher in the initial years (up to eight percent in the first year, if bought through an agent and three percent if purchased online). The charges drop to three percent from the sixth policy year if purchased from an agent and one percent if bought online.

Additionally, you also pay fund management changes and mortality charges. These reduce the amount that finally gets invested in the markets. For instance, of the Rs 1 lakh annual premium paid, only Rs 89,330 gets invested after all these charges get deducted. These high upfront costs reduce the compounding of investments over the long term. 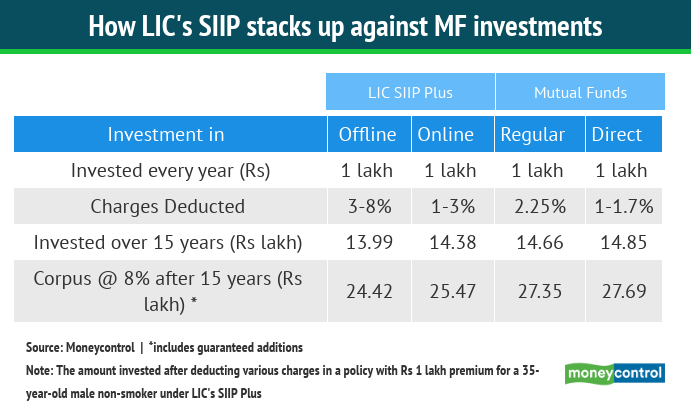 So, if you were to invest the Rs 1 lakh in a mutual fund, then Rs 97,750 would be invested under the distributor option and Rs 99000 under the direct plan.

The mirage of cashback

In order to sweeten the deal, LIC SIIP promises to pay you back the mortality charge that it deducts every year, which is the cost of insuring your life. The brochure claims that mortality charges deducted during the term of the policy would be refunded at the time of maturity. This is being used as a selling point by insurance agents, claiming that the risk cover is free of cost.

Alternatively, if you invest Rs 3,000 every year in a term deposit that gives you 6 percent interest, you end up making Rs 71,000.

Irrespective of the fund selected, the fund management charge of 1.35 per cent is levied each year on the entire assets managed under the policy.

If you stop paying before the policy lock-in of five years, a discontinuance charge would be deducted from the amount you invested in the policy. Based on the units accumulated, you would be paid the remaining amount. The life insurance portion wouldn’t be available anymore.

But, if you surrender a policy after five years, the entire amount accumulated would be paid, without the deduction of discontinuance charges. Also, refund of mortality charges is not payable on such discontinued policies. However, you could revive a discontinued policy by paying the premium within a maximum of three years. This revival period earlier was one year, but has now been extended to three years.

Beware of mis-selling from an LIC agent, especially these days, as we approach the end of the financial year. LIC SIIP fails our test on account of its high charges as compared to a mutual fund.

Back-of-the-envelope calculations show that, if you invest 1 lakh in LIC SIIP Plus and a similar amount in a mutual fund, then you would earn Rs 3 lakh more under a regular mutual fund assuming an 8 per cent return in both the products at the end of a 15-year period. This is even after adding the guaranteed bonus that the insurance plan promises. Also, the direct plan of a mutual fund would generate Rs 2.55 lakh more than the online plan of LIC SIIP Plus.

As a result of the heavy upfront charges in the insurance plan, the 8 per cent return shrinks to 6 per cent at the end of the term.

Even though the surrender charges are lower than the 2019 products, the heavy upfront charges would result in lower investments in the first five years. If you opt for an early exit, you would lose out due to deductions and surrender charges.

Lastly, the cashback of mortality charges doesn’t really work as there is an opportunity cost.

Insurance and investments are best kept separate, which this plan doesn’t allow.