Viewpoint | The inevitable recovery in the old economy sectors

A mere continuation of existing policy framework will unleash animal spirits in the economy over the next 18 to 24 months. Investors should keep this in mind while positioning their portfolios

Nobody really knows if PM Modi will win 2019 elections with absolute majority till the last vote is counted. However, given the fragmented opposition across states and lack of credible alternative have led to a situation where odds are in favour of NDA forming the government again.

A mere continuation of present policies is likely to fuel an impressive turnaround in India’s old economy sectors. And even if the regime changes, these pockets are likely to benefit from the work that has been done over the last 5 years.

Primary deficit continues to be low at around 0.2% of the GDP, while remaining deficit comes from the interest receipts towards the accumulated government debt over the years. As interest rates fall, the next government is likely to have more headroom to step up spending on key projects & welfare schemes.

Taming inflation creates plenty of room to go for a big drop in interest rates. India continues to have highest real rates globally. Our manufacturing needs a significant cut in the rates to remain competitive. And we might get it provided there is no oil shock. Barring an external shock, the stage is all set for a more than 100 bps interest rate cut in the coming months.

Investment Cycle Is Looking Up

Incidentally, industrial capacities are getting filled up and we are moving towards a larger base every year. Manufacturing capacity utilisation is on its way to reach 78-80% zone. Corporate balance sheets are getting deleveraged and new capacities have not come up in the last 3 years which is visible in the lackluster corporate credit growth. 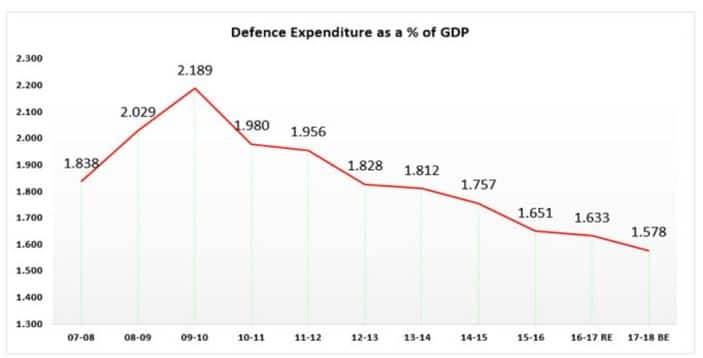 Defence budget as a % of GDP has fallen over the last decade. Defence forces are keen on downsizing the personnel which is likely to keep defence expenditure around present levels. ~67% of our defence budget goes into salaries & pensions. Which means incremental defence spending will go into capital expenditure.

Modernizing the forces and push for indigenous manufacturing of equipments is an important agenda for present policymakers. Also, state plus central government salaries & pensions as % of GDP have topped out at 8.5% of the GDP after the implementation of 7th pay commission. This number is likely to moderate by another 1% of GDP over the next 5 years, which creates more fiscal space.

A combination of these factors set the stage for next leg of upcycle in overall investment climate/GFCF ( gross fixed capital formation) expansion.

Industrial Recovery On A Larger Base

Recently, the Gujarat government invited bids for securing 3000 Megawatts long term PPA (power purchase agreement) after a gap of almost 5 years. Merchant power availability is likely to fall from 19 Gigawatt to 9 Gigawatt within a year as states rush in to secure their demand.

If we just extrapolate the current growth rates in steel, power, infrastructure on the present higher base, the next investment cycle is going to be far bigger than what we have seen in the past. If we don’t start adding capacity by 2020, India may face power shortage by 2024. Incremental capex of 50 million tonnes in steel & 50 to 70 Gigawatts in thermal power over the next 5-7 years is likely to percolate down the related value chain.

Close to 40% of the value addition in India’s manufacturing sectors comes from non-corporate sector. Which implies a huge boom for SME sector as well. All of this is likely to fuel a strong credit cycle.

From whatever we have seen till now, Mr. Modi & the present policymakers believe in having an incremental approach. A mere continuation of existing policy framework will unleash animal spirits in the economy over the next 18 to 24 months.

Investors should keep this in mind while positioning their portfolios and consider asset heavy businesses or companies that will benefit from a wide recovery across core sectors. Valuations across industrials and old economy sectors are still at a significant discount.

Stocks in power, steel, infra related activities, corporate banking appear to be in a sweet spot. If Modi 2.0 happens, this pocket should outperform. And even if the present NDA government changes, a mere natural progression on a higher base will ensure investors still make decent profits. In short – heads I win, tails I win less.

(Author is the founder & CIO at Alpha Invesco, a SEBI registered investment advisory. Views are personal.)