Public sector major Union Bank of India offers the lowest interest rate in the education loan space currently, starting at 6.8 per cent for a Rs 20-lakh loan with a tenure of seven years.

Nine other banks on the list of lenders that offer the cheapest interest rates on education loans also happen to be public sector banks, as per data from loan aggregator firm Bankbazaar. 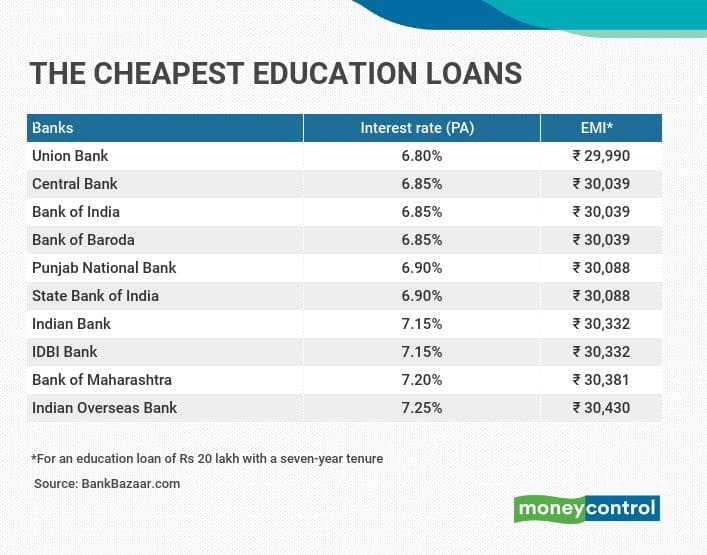 Central Bank of India, Bank of India and Bank of Baroda charge a mere five basis points more than what Union Bank does – their student loans start at 6.85 percent.

Even the most expensive loan offer on the top ten cheapest education loans list – from Indian Overseas Bank (IOB) – comes at an interest rate of 7.25 percent, which is far lower than HDFC Bank’s 9.55 percent.

Bankbazaar.com has considered interest rates on education loans for all listed (BSE) public and private banks for the data compilation. Banks for which data is not available on their websites are not considered.  Data collected from respective banks’ website as on November 12, 2020. Banks are listed in ascending order on the basis of interest rates i.e. bank offering lowest interest rate on education loan (loan amount up to Rs 20 lakh) is placed at top and highest at the bottom. Lowest rates offered by the banks on loan up to Rs 20 lakh are considered in the table. EMI, excluding GST, is calculated on the basis of interest rate mentioned in the table for Rs 20-lakh loan with tenure of seven years. Processing and other charges are assumed to be zero for the purpose of EMI calculation.
Moneycontrol PF Team
Tags: #bank #banking #Education Loan #loan
first published: Nov 19, 2020 11:03 am