172@29@17@248!~!172@29@0@53!~!|news|business|personal-finance|the-best-home-loan-rates-from-non-banking-finance-companies-5797001.html!~!news|moneycontrol|com!~!|controller|infinite_scroll_article.php!~!is_mobile=false
Subscribe to PRO at just Rs.33 per month. Use code SUPERPRO
you are here: HomeNewsBusinessPersonal Finance

Larger housing finance companies offer interest rates in the range of 7-7.2 per cent, but several other NBFCs charge much higher rates

We shift our focus to cheapest home loan deals offered by non-banking finance companies (NBFCs) in our second instalment.

Unlike banks, NBFCs do not have to peg their retail floating-rate loans to external benchmarks. All banks have had to pass on the cumulative repo rate reduction of 115 basis points (one basis point = 0.01 percentage point) since March to their borrowers. This is because from October 1, 2019, they have had to compulsorily link their retail-floating rate loans to external benchmarks, which is repo rate for most banks at present. 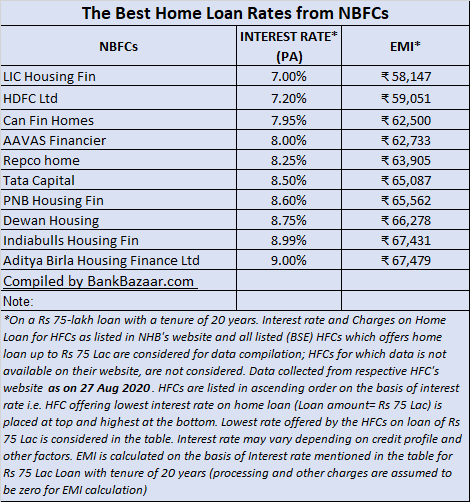 But larger housing finance companies like LIC Housing Finance and HDFC, too, have lowered their rates to compete with their banking peers. Their rates, 7 per cent and 7.2 per cent, respectively, are comparable to the lowest interest charged by some of the banks. At least five public sector banks, though, offer rates under 7 per cent, the cheapest ones in the market for home loan borrowers.

Despite the sharp decrease in policy rates, several other NBFCS continue to charge home interest rates of well over 8 per cent. If you are an existing borrower and your bank or NBFC continues to charge interest far higher than market rates, you can negotiate with your lender and opt for a balance transfer  if the negotiations fail.