Tax-saving fixed deposits that offer up to 7.75% for senior citizens

Investments up to Rs 1.5 lakh can be claimed for deduction under section 80C of the income tax act.

Senior citizens face a double whammy as far as investments in fixed-income instruments are concerned. The interest rates on small-saving schemes as well as fixed deposits have declined steeply over the past one year. The RBI has steadily cut repo rates. Banks and small-saving schemes have followed the same trajectory.

Even so, there are some banks that offer attractive rates on five-year tax-saving FDs for senior citizens. 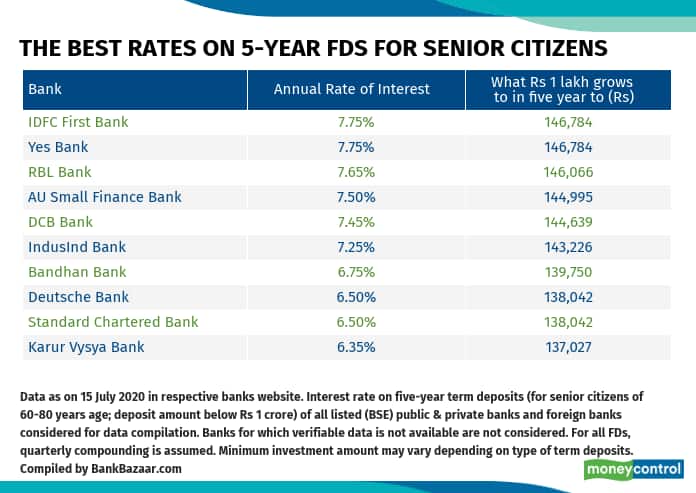 As many as six private sector banks offer FDs with rates in excess of 7 per cent for a five-year tenure.  IDFC First Bank, IndusInd Bank, RBL Bank and AU Small Finance Bank offer 7.25-7.75 per cent interest on their five-year tax-saving FDs, according to data compiled by BankBazaar shows.

Investments up to Rs 1.5 lakh can be claimed for deduction under section 80C of the income tax act.

Deposits of up to Rs 5 lakh are guaranteed by the Deposit Insurance and Credit Guarantee Corporation, a subsidiary of the RBI.

After allocating to small-saving and other avenues, investors can invest any surplus in such FDs.

Large private and public sector banks offer far lower rates on tax-saving fixed deposits, given that customers flock to them for parking their savings.

The minimum investment amount varies from Rs 100 to Rs 20,000 for five-year fixed deposits across banks.