Switch to repo-linked home loans in COVID times, save on EMIs

If your home loan is linked to the MCLR or Base Rate, move to repo-linked lending rate to reduce your interest outgo

Despite the Reserve Bank of India (RBI) making loan pricing more transparent by linking it to external benchmark rates, from October 2019, most banks don't seem to have informed their customers about the move.

This is precisely what happened to one of wealth manager Pallav Bagaria’s clients. On analysing her repayment schedule earlier this year, he found that her home loan, taken in 2006, was linked to the base rate, with the effective home loan interest being 12.2 per cent. This, at a time, when several banks and housing financing companies were charging new borrowers around 8-9 per cent annually.

“The original loan amount was just Rs 14.5 lakh. However, despite paying equated monthly instalments (EMI) regularly for over 13 years, the outstanding principal was still substantial, at Rs 11.03 lakh,” explains Bagaria, Director, Sapient Wealth Advisors. She had paid interest amounting to over Rs 17.16 lakh to date, but principal repaid until then was merely Rs 3.12 lakh. “I advised her to prepay her entire loan in one go. Despite the lower interest rates that are promoted by banks now, they do not proactively encourage borrowers to switch to newer regimes,” he says.

Banks’ reluctance aside, it’s also important for us to revisit our expenses in these novel Corona Virus Disease (COVID-19) times. Tightening our budgets is crucial. If you have been paying your home loan for a long time, pay more attention. You might just realise that you have been paying interest far in excess of the current market rates. “There is no reason to stick to older interest rate regimes, when a far more customer-friendly external benchmarking mechanism for pricing home loan rates has been introduced,” says Vipul Patel, Founder, Mortgageworld.in.

The reality, however, is this. “A shift will not happen automatically for existing customers. The loan agreement is applicable for the entire tenure of the loan. So, you will need to approach your bank and ask to be switched to the RLLR,” says Adhil Shetty, Founder and CEO, Bankbazaar.com.

Take the case of Mumbai-based finance professional Yash Jain, for instance. A savvy borrower, he managed to shorten his home loan tenure by negotiating with his bank and got it to offer a lower rate (linked to the MCLR) last year. “While I was paying interest at the rate of 8.7 per cent per annum, the bank was offering 8.1 per cent to newer borrowers. I negotiated with them and moved to the lower going rate. I have managed to save on 19 EMIs in the process,” he explains. Now, he is planning to ask his bank to facilitate a move to RLLR, as rates have dropped further. If you took a home loan between April 2016 and September 2019, it is likely to be linked to the marginal cost of funds-based lending rate (MCLR) – banks’ internal benchmark. If your loan is even older, it is likely to be pegged to the Base Rate, which is also an internal metric to price home loans. Existing home loan borrowers’ long-standing grievance has been that lenders are quick to increase rates when the RBI increases its policy rates, but tend to drag their feet when rates head south. Echoing such borrowers’ sentiments, an RBI-constituted Internal Study Group pointed out that internal benchmarking regimes had failed to effectively deliver transmission of monetary policy. It, therefore, recommended a shift to an external benchmarking regime.

The RBI accepted these recommendations and mandated that all new, retail floating-rate loans be linked to an external benchmark from October 1, 2019. Most banks have chosen the repo rate and the transmission has visibly improved. For example, when the RBI slashed the repo rate by a massive 75 basis points on March 27, banks had to effect an equivalent cut in their repo-linked lending rates (RLLR). The State Bank of India’s RLLR dropped from 7.4 per cent to 6.65 per cent, with effect from April 1. On the other hand, its one-year MCLR, to which pre-October 2019 home loans are linked, saw a much smaller reduction of 35 bps – from 7.75 per cent to 7.4 per cent – on April 10.

“Moreover, RLLR operates with immediate effect, unlike MCLR. In case of most banks, it is effective from the succeeding month of the repo revision by the RBI. This mechanism is more transparent and effective in passing on the benefits,” adds Patel. On the flipside, borrowers could see more frequent resets when rates in the system start moving northwards. “Home loan borrowers comfortable with frequent and swift changes in their lending rates, both upwards and downwards, should consider switching to an external benchmark regime. Remember that once an existing borrower switches to the external benchmark regime, he/she cannot switch back to the older regimes,” says Naveen Kukreja, CEO and Co-founder, Paisabazaar.com.

However, a floating-rate borrower knows that interest rate fluctuation is intrinsic to such loans. Also, even if MCLR-linked home loan rates were to be lower than RLLR, the latter will continue to be superior due to the transparency on offer.

Currently, the benefits of the RLLR are evident in the case of most banks and loan categories, as repo-linked home loans are cheaper than MCLR loans. On a Rs 30-lakh loan carrying an interest rate of 7.5 per cent, even a 35-bps difference due to a shift to RLLR can result in savings of Rs 2.52 lakh on interest outgo over the loan tenure. You will have to pay ten fewer EMIs. 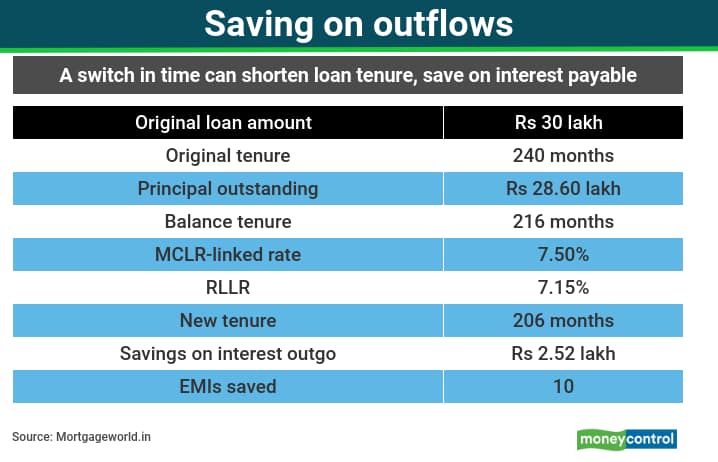 As per RBI rules, banks have to facilitate this move, though they can charge a one-time administration fee for the purpose. A switch out of older regimes is something you ought to have made as soon as the RBI announced the external benchmarking regime in October 2019. If you haven’t done so, however, do not delay any further.

Negotiate with your lender.

The external benchmarking regime is applicable only to banks, and not to housing finance companies (HFCs). Despite this, the RLLR mechanism followed by banks is likely to compel them into offering competitive rates voluntarily. If your HFC fails to do so, step one should be to negotiate with it. No lender would want to lose a creditworthy borrower, especially in times such as these, and you are likely to be offered a better deal. In case your lender does not relent, initiate the process for a balance transfer. “Such borrowers will have to transfer their home loan to a bank for availing the external benchmark regime,” says Kukreja.

Now, an internal conversion – where you ask your existing bank to move you from MCLR to RLLR – can be concluded even now. “For the purpose, the customer can send a request through her registered email ID,” says Virendra Sethi, Head, Mortgages and Other Retail Assets, Bank of Baroda.

You will need to check with your bank if the process can be executed completely online. “If the movement is within the bank, it is more like writing an email or dialling phone banking and formally raising a request. This should happen irrespective of the lockdown,” says Patel.

If you are looking to transfer your loan balance to another bank, you might hit the lockdown wall at present. “All vendors are under lockdown and, hence, the proposal cannot be processed in the situation,” says Sethi.

Home loan refinancing is entails copious paperwork, with physical presence and signatures being mandatory. “A few banks have initiated digital approvals and substantial processes can be completed online. But KYC, verification and valuation necessitate physical visits to customers’ residences, offices, and lenders’ branches, which can happen post the lockdown being eased out,” says Patel.

That should not be an excuse to delay the process though. Use the time to do your homework and understand the process and requirements of balance transfer. “Different banks have different loan qualification criteria such as the borrower’s age, job profile, employment stability, credit history and others. Use calculators and eligibility charts to understand your eligibility with a particular lender to avail the best possible offers,” says Shetty.

Patel advises completing all the steps online before obtaining an in-principle sanction. “If soft copies of property papers are available, forward them to the new lender to complete the legal evaluation. Once the lockdown is over, valuation, verification, account opening and signing loan agreement and so on can be completed,” he says.
Preeti Kulkarni
Tags: #banking #Home Loan #loans
first published: Apr 30, 2020 09:05 am