Templeton India Growth Fund will complete 25 years later this year. It was the first mutual fund scheme rolled out by Franklin Templeton Mutual Fund (FT MF) when the fund house set shop in India in 1996. But the celebrations are bound to be muted on account of another anniversary – it will be one year in April since the fund house decided to wind up six of its debt schemes.

On February 1, the Supreme Court (SC) is expected to give its directions on the next step in the winding up process, after the recent e-voting exercise. If all goes well according to the plan, investors may, in a matter of few months, start getting their money in tranches as and when the fund house is able to liquidate its holdings. But Franklin Templeton’s (FT) struggles would be far from over. The fund house’s image has taken a beating. Besides, the AMC’s equity schemes too are struggling with below-average performances.

Can Franklin Templeton get out of this mess and regain its lost glory?

A hit on its profitability

Through its high yield-oriented debt schemes, FT MF had built a profitable business. “These schemes charged high expense ratios, as they delivered better returns,” says Dhirendra Kumar, founder and chief executive officer of Value Research. So long as the schemes delivered returns, they were investor favourites.

When FT decided to wind up the six schemes, it lost close Rs 30,853 crore worth of assets or nearly 60 percent of its own debt assets, virtually overnight. These schemes accounted for 36 percent of total assets managed by FT MF. Its profits, subsequently, got impacted.

“FT MF will not have a good presence in debt segment, as these six product categories will not be available at least for the foreseeable future,” says Deepak Chhabria, chief executive officer and director at Axiom Financial Services. It is highly unlikely that the Securities and Exchange Board of India will allow FT to re-launch schemes in these categories in the near future. These six schemes’ categories consist a little over one-third of investor assets among all debt funds.

Not just a blow to these six schemes… 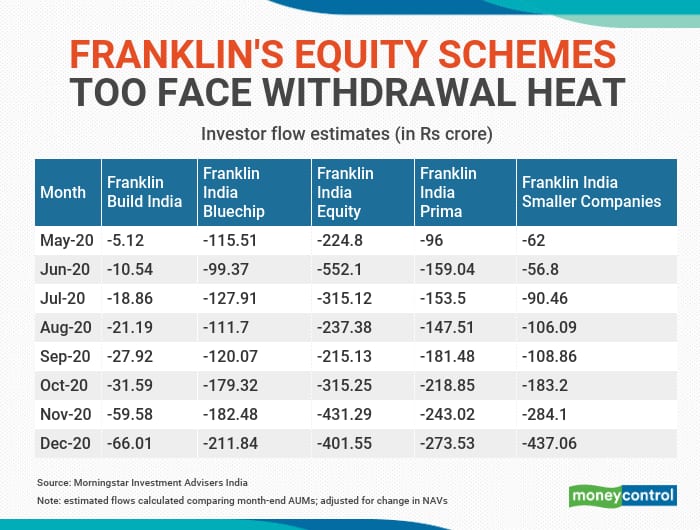 Its equity funds, too, faced collateral damage. As the news of the debt schemes winding up and of court litigation gathered steam, many investors from its equity funds also started withdrawing. That FT’s equity performance had been weak in recent years made matters worse. In the last three years, most of FT MF’s equity schemes have delivered returns below their category averages, shows data from ACE MF.

“It will be an uphill task for FT MF to get its equity funds back in the reckoning, as these funds will have to beat other fund houses’ equity schemes, some of which have been consistent outperformers,” says Chhabria.

According to Morningstar’s estimates, equity schemes of FT MF had net outflows of Rs 9,637 crore between March 2020 and December 2020. To be sure, experts say investors might also be taking money off the table as FT MF’s schemes started to outperform in the second half of CY20.

Franklin Templeton did not reply to Moneycontrol’s queries.

Long and tough road ahead

Unless FT does damage control and takes drastic steps to restore investors’ faith, the fund house may find the going tough. Corporate governance expert Shriram Subramanian, founder, InGovern, says that SEBI must penalise FT MF with 2-3 years of asset management fees it had collected in these six schemes over the last few years.

Timely repayment of investors’ money in these six funds is of utmost importance. “If the fund house is able to do that, it can then try to explain to investors why its decision to wind-up the schemes was justified under those circumstances. However, if it is not able to pay the entire amount, investors will not have a reason to listen,” says the chief executive officer (CEO) of a fund house, requesting anonymity.

“In fact,” says Dhruv Mehta, chairman of Sapient Wealth and Advisors the fund house “must pay back to investors at the same net asset value as the schemes had on April 23, 2020 (the day they were shut) or at a higher NAV.”

Just returning the money to unitholders would not be enough to woo investors back.

The fund house’s move to wind-up the six debt schemes was unprecedented.

As matters drag along in the courts, the fund house’s image gets hurt further. FT MF will need to do a lot of work to win back investors. Getting the performance of equity schemes to benchmark-beating levels is another tough task ahead.

This is crucial as the fund house has repeatedly stressed that it will continue to carry on its business in India.

Critics suggested taking the back fees paid  and the bonuses of fund managers.

There was another suggestion made in the court. It was about appointing another asset management company to oversee the winding up process. One of counsels in Supreme Court (SC) suggested that a third-party such as State Bank of India be given the authorisation to oversee the winding-up process. However, this was not a formal proposal as no third-party was yet approached. Also, how well this would work is yet to be tested, although trustees have the right to do so.

All eyes are now at SC that will next hear the Templeton matter on February 1.