Selected Articles from
Financial Times on Moneycontrol Pro
Upcoming Webinar :Register now for 'ULIP as an investment during economic recovery' powered by Bajaj Allianz
you are here: HomeNewsBusinessPersonal Finance

When the bear onslaught in the equity markets intensified in March, you may have taken solace from holding safe debt funds. While most of you now know that long-term debt funds do witness some volatility, triggered by interest rate swings, you may have always assumed that short-duration funds are more stable. This assumption was put to test in the second half of March 2020.
Even short-term funds falter

Beginning March 12, liquid, ultra-short, low duration floater, money market and short duration fund categories started reporting negative returns on a daily basis, triggering panic among investors who had parked surpluses for short-term and income needs. Thankfully, this trend reversed after the RBI announced a large monetary package, by cutting rates as well as by allowing a moratorium on loans. Before we move on to what can happen from here, it is important for you to know what exactly triggered such a rapid fall. First, the month of March typically sees redemption from companies for advance tax payment purposes. This only got accentuated as companies also needed liquidity, as cashflow was coming to a standstill with the lockdown. While normal redemption is something that fund houses gear-up for, unanticipated redemptions can result in fund houses selling instruments at sub-optimal rates, triggering spikes in yields and dips in prices. Short-tenure instruments such as certificates of deposits and commercial papers saw a jump in their yields.
Second, a dried-up bond market, with most dealers not being able to work optimally (or having to do so from home), also meant poor liquidity and pricing.
Third, a pandemic of the nature that we are experiencing now, not only causes panic in equities, but also does so in the debt markets. This resulted in FPIs selling debt instruments as well. By March 22, FPIs had turned net sellers in the debt market, selling Rs 46,962 crore month-to-date, higher than even their equity sales.
Fourth, in categories such as liquid funds, instruments with a maturity of less than 60 days held by the funds were earlier not marked to market. Now, with SEBI requiring mark-to-market pricing for any instrument with a maturity of over 30 days, there is more volatility when yield swings happen. Over half the universe of liquid funds had average maturity exceeding 30 days as of February 2020.
The graph above will tell you that various categories of short duration funds – from liquid to money market to short-duration schemes – saw a fall; the dip being the steepest in short-duration funds and the least in liquid funds.
The reversal happened after the RBI’s massive 75-basis point rate cut, besides other announcements on the monetary front to ease liquidity concerns. You will see in the graph that short-term debt funds rallied after that. Yields on certificates of deposits eased by as much as 250-basis points, while those for AAA-rated three-year tenure bonds eased by as much as 140 basis points.
While this may have alleviated your concerns about the fall, there are a few things that need to be taken note of in this rally.
Taper return expectations
One, the spike in the returns of very short tenure funds should not be viewed as an upcoming rally. If anything, categories such as liquid funds may see lower returns as massive rate cuts from the RBI will result in fresh short-term instruments coming at lower coupons, thanks to the ample liquidity in the system. Hence, these options may not necessarily be better than fixed deposits today.

Two, you need to be aware that credit risk can well be prevalent in short-tenure funds as well. Funds in categories such as ultra-short term, low duration and short duration can well hold instruments that have high credit risk. In the current environment, with heightened risks of default and working capital management, the last place to be invested in would be in the credit risk segment. The accompanying table will tell you that even low-duration funds had poor returns over the past year. The reason is the heightened downgrades and defaults in many of those instruments, leading to NAV hits and even segregation of portfolios in some. So, two takeaways here: One, taper your expectations of returns from very low duration instruments. Two, stay with quality low-risk funds rather than being lured by high yield to maturity in schemes in this range of tenure.
Long can be dicey too

In normal periods of significant rate cuts, the direction is clear. Long duration funds such as gilts will offer a bonanza. However, the current situation is a bit tricky for two reasons: one, the fiscal deficit arising from the moves by the RBI as well as the govt. to boost the economy would be a major worry for the bond markets. Hence, a clear signal for a rally may not be evident. Second, the targeted long-term repo operations by the RBI have provided a three-year window for banks and financial institutions to borrow at repo rate and deploy in the bond market. This is with an aim of stabilising the debt market. However, the window also means that banks and financial institutions will focus on medium-term bonds than long-term gilts. Hence, the demand in the medium-term window and a resultant rally appears to hold higher prospects at this juncture. Hence, taking calls on very long tenures may be risky at this point. 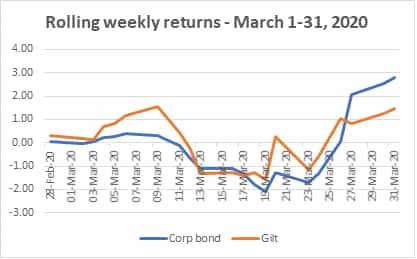 You will see from the graph above as to how medium-tenure high-quality segments such as corporate bonds are showing signs of bouncing back faster, despite lower duration, than gilts.

That leaves you with the medium time-frame and high-quality credit opportunities to beat the interest rate blues that you will soon see as deposit rates are further slashed.