Over 60% medical claims delayed by more than a month: Beshak health insurance survey

Lack of guidance from insurers and TPA during claim intimation, paperwork and processing rile policyholders

At a time when COVID-19-driven demand for health insurance is on the rise, a survey conducted by Beshak.org, a consumer awareness platform for insurance, has brought some uncomfortable concerns to the fore.

Over 60 percent of health insurance policyholders had to wait for at least a month for their reimbursement claims to be settled. And, the process took two months or more for one-third of the respondents who opted to submit their bills to the insurer post-discharge and claimed reimbursement of expenses. 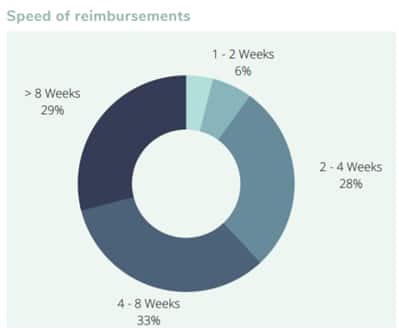 “Overall, a little over half – 53 percent of the respondents – expressed extreme or mild dissatisfaction with the speed of receiving their claim (when both cashless and reimbursement claims are taken together,” the report said. In the case of reimbursement claims in particular, delays can aggravate the financial strain due to humungous hospitalisation bills. “This large majority of individuals would have had to pay the hospital bill from their savings or take a loan – and that amount isn't settled for over a month.

Further, all that while, they worry wondering whether or not the money will hit their account at all,” the report points out.

Lack of handholding at the time of claim intimation

Most health insurance policyholders were dissatisfied with the kind of support they received at the time of claim intimation, the survey has found. To be sure, policyholders are supposed to inform their insurance companies before they get hospitalised. This alerts the insurance company that a claim is on its way.

Nearly one-third – 29 percent – did not receive any timely support at all from their insurers or third-party administrators, while another 23 percent said these entities provided some sort of support. Only 48 percent of the respondents said they received timely support for claim intimation. 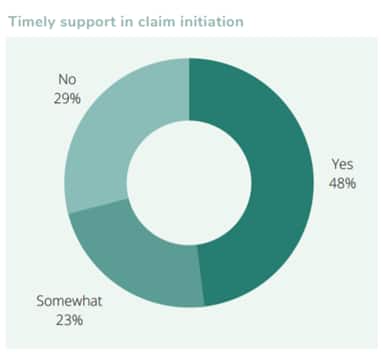 This is a matter of concern, as the purpose of buying a health policy is to eliminate anxiety around funding the treatment. And claim intimation is also done at the time when the policyholder is about to get hospitalised. Lack of handholding at such a time adds to the stress.

“While the processes remain riddled with lengthy forms and ambiguous clauses – the onus remains on the ecosystem to provide all the support you need to get your claim as smoothly as possible, so you can focus on what matters most: the treatment, caregiving and recovery,” the study points out. Moreover, 40 percent of those polled did not receive any guidance on the claim process and associated paperwork.

And claim intimation is merely step one in the cumbersome process. When it comes to actual claim processing, the level of dissatisfaction is even higher, as 40 percent of those polled said they did not receive adequate guidance during the claim process. For claim approval, 43 percent had to repeatedly follow up and another 13 percent said they needed to follow up at least a few times during the claim settlement process.

Laborious paperwork is another cause of disconcertion for hospitalised policyholders or their family members. The Beshak poll found that 72 percent of the respondents felt that the claims process required more paperwork than they considered ideal. “With seven out of every 10 customers experiencing dissatisfaction with the amount of paperwork they've to do, this area presents a major opportunity for improving the current processes in favour of the end users. Such back-and-forth trying to fix minor errors, delays between queries and responses could delay the final insurance approval by hours, even days,” the study notes.

Despite the increased adoption of technological tools for claim processing, particularly, this year, insurers and their support associates were found wanting on this front. Among those polled, 60 percent said they faced some level of difficulty in tracking their claims through SMSes, emails and WhatsApp. “Most insurers have built apps, as well as promised to send text notifications through SMS and WhatsApp to customers. It is very surprising that 60 percent individuals reported that they did not receive the latest updates. Insurers should consider implementing rigorous periodic tests of their systems to check whether there are any gaps in the delivery of messages,” the study says.

Besides the process, the policy wordings, too, add to the complications at a time when you or your loved one are in the hospital. According to the Beshak survey, 33 percent of all respondents said that they were not able to understand the deductions made at all, while another 15 percent of respondents did not understand at least some of the deductions. “Taken together, that is close to 50 percent of the respondents who paid money out of their pockets, without clearly understanding why,” the report says.

Deductions refer to expenses that insurers do not pay for, as they would count as exclusions as per the policy documents. For example, costs of diagnostic tests not related to your cause of diagnosis and treatment are excluded. Likewise, the treatment of any illness within the first 30 days from the date your first policy commences will also not be paid for, except in the case of accidents.
Moneycontrol PF Team
Tags: #Health Insurance #insurance
first published: Jan 4, 2021 09:35 am