Monkeypox reaches India: Will your health and travel policies cover the costs?

Hospitalisation expenses will be paid for, but not the cost of isolation if you are not being treated

Even as the world attempts to learn to live with the dreaded COVID-19 disease, the spread of another viral ailment — Monkeypox — has now assumed worrying proportion.

The World Health Organisation (WHO) on July 23 declared the viral disease, which has now been detected in 70 countries, a global emergency. In India, the state of Kerala has reported three cases since July 18, while a 34-year-old man was diagnosed with the illness in Delhi.

So far, the confirmed Monkeypox patients in India are receiving treatment at government facilities. However, health insurance policies will reimburse the cost of treatment even if the affected individuals were to be admitted to private hospitals.

Monkeypox-linked hospitalisation will be covered under regular health insurance policy, too. In 2020, the Insurance Regulatory and Development Authority of India (IRDAI) had asked insurance companies to pay for COVID-19-related claims. This, despite the infectious disease being declared a pandemic, which was a permanent exclusion in some policies back then.

“Monkeypox, just like any other infection or disease, will be covered by health insurance if it requires hospitalisation. In a medical emergency, one should have adequate health insurance to protect themselves from sudden, unexpected hospitalisation costs,” says Amit Chhabra, Head, Health and Travel Business, Policybazaar.com. This also includes any newly-created facilities that are designated as hospitals by government authorities during an epidemic.

Precautionary isolation without treatment not eligible for claims

However, things might get tricky if you are asymptomatic and are merely put up in an isolation centre as a precautionary measure, as happened in the case of COVID-19. “If it is only a case of isolation without an active line of treatment, the expenses will not be covered,” says Raghavendra Rao, Chief Distribution Officer, Future Generali India Insurance.

On your part, ensure that you go through your policy’s wording to figure out your insurer’s approach on dealing with isolation-related claims — a lot will depend on the condition of your health. “Insurance policies cover instances where admission is warranted in a hospital/similar certified facility. As long as the patient’s medical condition requires him/her to be admitted in a facility, and this is based on the treating doctor’s advice, the costs shall be covered,” says Deshmukh-Gilbile.

Infectious diseases are covered under travel and health insurance policies. Since the Monkeypox outbreak falls under this category, your general insurance company will pay the hospitalisation bills.

“At the moment, it seems that while people are indeed contracting the ailment and infectivity is high, mortality is low. While people are getting sick, there aren’t a lot of hospitalisation cases so far. We will cover Monkeypox and pay for the treatment,” says Sanjay Datta, Chief, Underwriting, Claims and Reinsurance, ICICI Lombard General Insurance.

Most travel insurance policies will cover Monkeypox-linked treatment, but it is best to go through your policy’s wording to understand the finer details. “Travel policies largely function on the principle of covering instances where in-patient hospitalisation (at least 24-hour hospitalisation and treatment) is medically necessary. That being the case, such admissions shall be covered. The terms and conditions may, however, vary from insurer to insurer,” says Priya Deshmukh-Gilbile, Chief Operating Officer, ManipalCigna Health Insurance. 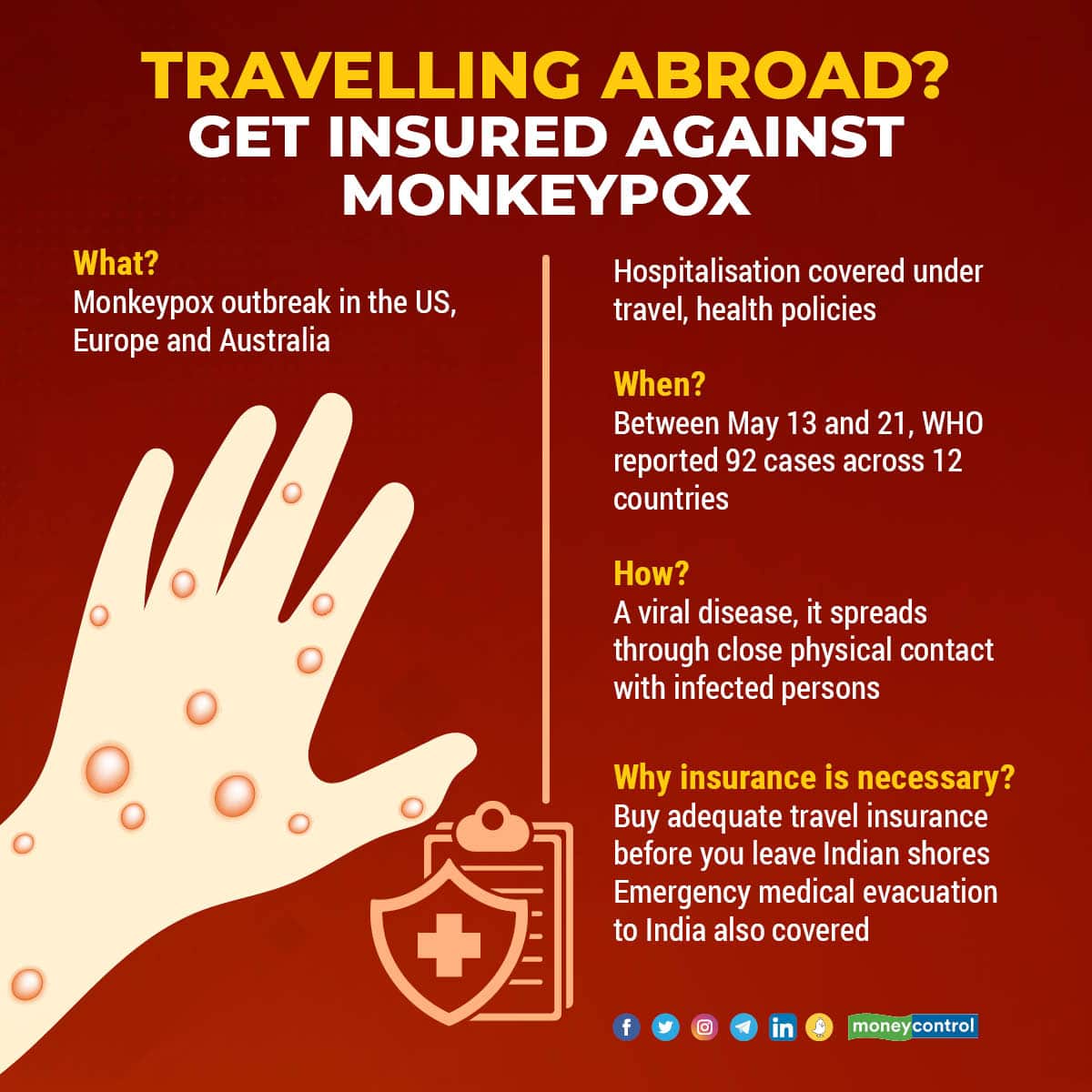 Insurers will pay for emergency medical evacuation to India

In fact, even if the policyholder’s condition is such that she has to be evacuated to India for further treatment, the travel policy will pay the bills as medical evacuation is covered. However, this is subject to the government's evolving regulations to contain the spread. However, if you were to come back to India and get treated here, your travel insurance will not cover the costs — you will have to claim such expenses under your regular, domestic health insurance plan.

While travelling abroad, however, you must not disregard any local advisories or the ones issued by the government of India, if any. Depending on the insurer’s approach, it may or may not issue a policy if the Indian government advises citizens against travelling to some countries. But once a policy is issued, the claim will be paid for.

Preeti Kulkarni is a financial journalist with over 13 years of experience. Based in Mumbai, she covers the personal finance beat for Moneycontrol. She focusses primarily on insurance, banking, taxation and financial planning
Tags: #Covid-19 #Health Insurance #insurance #monkeypox virus #personal finance #Travel Insurance
first published: May 27, 2022 11:39 am