Money management: Where are the women financial advisers?

In a DSP Winvestor Pulse 2019 survey, 4,013 women and men were interviewed for their investing behaviour. Six times more women (19 per cent) preferred to deal with a female financial adviser than men (3 per cent).

As an increasing number of Indian women take charge of their financial lives, they seem to have a preference for female financial advisers.

The financial services industry is slowly coming around to serve women’s needs for a better financial future. But is that enough?

As per industry estimates, of the total number of mutual fund distributors, only 20 percent are women. Women account for just around 10 per cent of the total Securities and Exchange Board of India (SEBI) Registered Investment Advisers (RIAs). Network FP, a pan-India network of finance professionals, has only 16 per cent members as women. In the insurance sector, 27 percent of the total individual agents are women.

Listen | Hikes in health insurance premiums: How policyholders can keep premiums in check 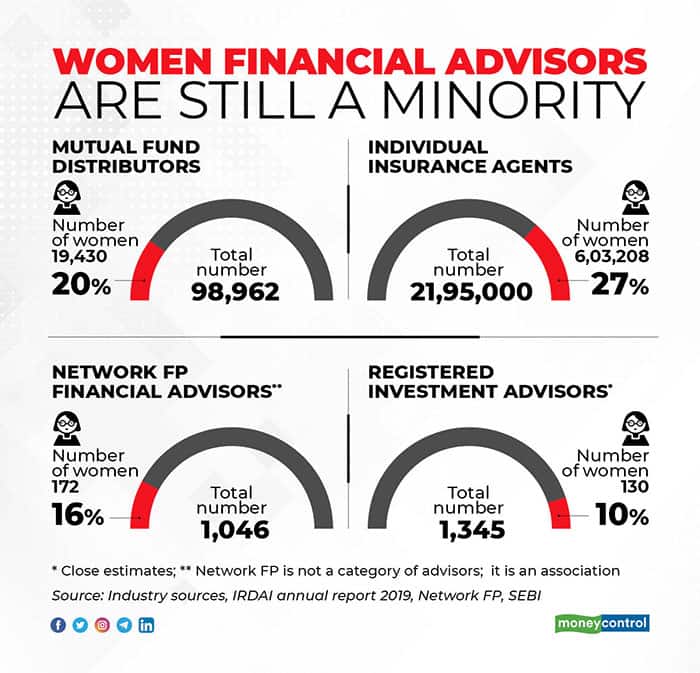 Increasingly women also seek to play a role in money management. Sadique Neelgund, Founder of Network FP says that women are actually best suited for the job. “Financial advice today has more to do with coaching the mindset of your client that helps them develop healthy financial habits and helps them achieve their set goals. This requires patience, listening skills, ability to empathize with your client’s situation. Women are inherently great with these skills,” he says.

“Setting up an advisory or distribution business requires huge level of commitment in terms of efforts as well time. Women find it challenging to do this own their own,” feels Roopa Venkatakrishnan, Secretary, Foundation of Indian Independent Financial Advisors (FIFA). She has over 20 years’ experience. While she insists on female members being present in her client meetings, she also persuades and motivates young women in the financial sector to not limit their capabilities and expressly share their ambitions with their family members.

Roopa belongs to the first and foremost batch of established women advisers who started their career from the financial distribution jobs, or private banking set-ups and began their own practice almost two decades ago.

There is also a new generation of women advisers that has professional qualifications, works in an independent set-up and is making its presence felt with an active social media reach out.

“Yet, independent financial advisory is not yet seen as a remunerative career option by women,” avers Mrin Agarwal, Founder of Finsafe India.

The recent SEBI RIA regulations’ amendments envisage, among other aspects, a higher networth and more qualifications, which have brought further challenges to women entering this profession. “There is lot of uncertainty regarding the structure, regulatory aspect, the income potential of this profession,” says Sandip Ghose, former director at National Institute of Securities Markets (NISM).

“A college student won’t suddenly come up and say I want to take up financial advisory until there is credibility and scope of viable remuneration built around the profession,” says Anuradha Rao, former MD and CEO, SBI Funds Management. “Families have to consider financial planning as an important task, so that kids understand its importance while growing up. Once they get into college, they could then consider it as a meaningful profession,” adds Rao. She cites the example of State Bank of India – young probationary officers are initiated into the concept of financial planning as soon as they join the bank.

Something similar was done at NISM, where Sadip Ghose conducted several financial literacy contests across schools in India. Families would come together to train and participate for the contests. There was equal participation among boys and girls. Programs directed for young finance graduates also saw lot of participation from women. While they would understand the need and importance of financial planning, they wouldn’t consider it as a profession to be in.

A few asset management companies (AMCs) on their own initiative do conduct training, generate online content for women by women advisers. But that hasn’t translated into a large army of women advisers yet. But Sadique of Network FP feels that a slow change is around the corner. His company’s personal finance certification program has 23 percent enrolment from women, of which most are women returning after a career break or intending to gain knowledge for joining the family business of financial planning or distribution.

Women financial advisors that Moneycontrol spoke to pointed to some western countries where many clients have begun demanding their advisory firms to have more gender diverse teams. Till then, it’s a slow but long climb for the women advisory tribe here in India.

(The writer is a financial coach for women and a freelancer)
Tags: #adviser #distributor #financial planning #invest
first published: Oct 21, 2020 09:32 am

Brimato? Hybrid plant that gives both brinjal and tomatoes, made in Varanasi