If your high-performing athletic teenage child suffered a bad injury that would impact her performance and may likely take time to heal, what would you do? You have two options. One, give intense physical therapy, provide high-protein food or collagen and other such supplements to hasten healing, provide regular psychologist counselling to keep the morale intact and of course spend a bit more lavishly on the kid to ensure she bounces back. Two, just provide good nourishment and emotional support, stay in the periphery and allow the teenager to heal by herself and return to top form or even settle for a middle-order performance.

The second approach is what the government appears to be taking with the economy, through budget 2020-21. For those who looked for revival in growth through the budget, the disappointment was apparent in the way markets reacted on budget day.

But like in our analogy, if the healing had been hastened, would there have been a recovery? We aren’t sure, as the nature of the malaise ailing the economy is far too deep for booster shots to work, given the financial crisis that has confronted the economy for the past 2-3 years.

Hence, no surprises that the budget hasn’t fulfilled the wish-list of the equity market. However, it is pertinent to understand how the budget has worked in the side-lines to help some sectors pick themselves up.

First, it has focused on quality rural spends. The nature of this spend automatically enhances the order prospects for sectors such as infrastructure, construction and construction materials, several capital goods companies including power and renewable energy equipment makers and transmission firms, telecom service providers as well as NBFCs. In other words, the rural spend does not appear to be just focussed on reviving consumption, but seems more targeted at triggering investment.

Second, while it has not directly helped NBFCs, reducing the limit for asset recovery as well as providing newer opportunities to lend (invoice financing) gently pushes NBFCs into getting their act together. This push, along with higher bank deposit insurance, can go a long way in building confidence in the dented financial sector.

Third, infrastructure spend needs to be seen in light of the National Infrastructure Pipeline that has a Rs 103 lakh crore outlay.  And the budget tries to fund infrastructure projects through sops. For example, 100 per cent exemption is proposed on interest, dividend and capital gain on investments in infrastructure in India by foreign sovereign wealth funds. Other urban programmes such as AMRUT and Smart Cities have seen a close to 40 per cent hike in allocation proposed for FY-21.

The markets did not wait to take cues from the budget. An important trend that is emerging  is the broader rally in the market from September 2019.

First, two out of every three stocks in the Nifty 500 rallied between September 2019 and January 2020. Besides, close to 45 per cent rallied over 10 per cent in these four months. The data in the table shows where the rally came from – sectors such as power, realty, telecom and consumer durables, all find a place.

The second point to note is that this comes from a rally outside the large companies, falling into the Next 50 and beyond (mid and small-caps). This is evident from the average market cap mentioned in the data below. The third point is that, financials that rallied in this segment come from sub-segments such as brokerages, small finance banks and mid-sized NBFCs. 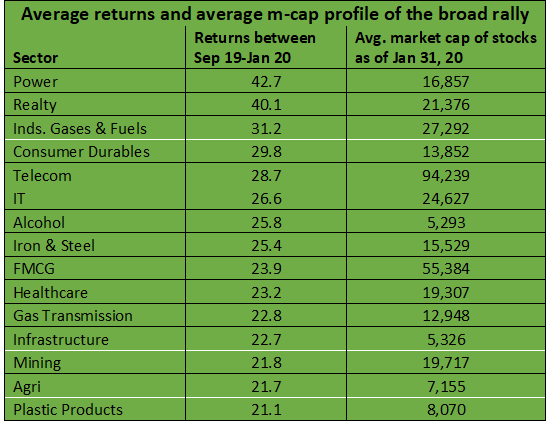 Besides, the December quarter results for about 190 companies too point to a similar trend, in terms of a revival in sectors and segments that were beaten down.

Now connect the key areas of spend/reforms we mentioned in the first part to the sectors/market-cap segments and the data, and you will know where the opportunity lies! For those of you piling on large-cap stocks or funds given their outperformance, it may be time to take a relook at the market, in light of the broader rally that appears to be emerging and also the revival in segments that are more mid-sized in terms of market cap.

(The writer is Co-founder, PrimeInvestor)