Even as the third COVID-19 wave takes root in India, many are still reeling under the impact of the first two waves in 2020 and 2021, though there is a sense of optimism too, a study conducted by SBI Life has found.

“In the backdrop of the ongoing pandemic, a vast majority of Indians are confident that the country would tide over the situation or a possible third wave. The confidence of being able to navigate through the situation is not surprising when 80 percent Indians strongly feel prepared towards physical immunity on account of taking either single or double dose of vaccination,” the company said.

But, many are legitimately concerned about the looming challenges. The rising cost of medical treatment is the top-most concern for a large number of Indians (59 percent), at par with instability in jobs. These are closely followed by concerns (58 percent) around their health, as also that of their family concerns.

The second edition of the study – Financial Immunity Survey 2.0 – to assess Indians’ attitude towards financial preparedness was conducted by SBI Life and NielsenIQ (India), covering 5,000 respondents across 28 cities in India.

While the employment scenario in India has improved since the mayhem unleashed by the first lockdown in March 2020, over a third of the Indians (35 percent) have not seen any recovery in their income levels that took a hit in 2020. Just seven percent of the respondents said their income has increased and 44 percent reported a restoration after pay-cuts. 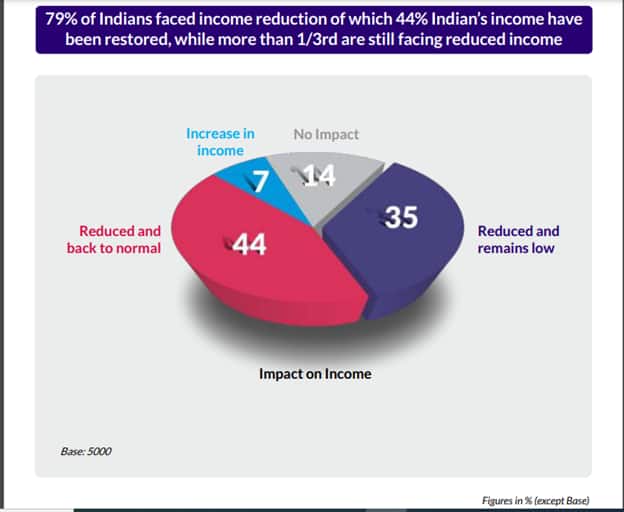 Also read: Money lessons for coping with job losses and pay cuts due to COVID-19

The economic impact of the pandemic is clearly seen in Indians’ plans for their short as well as long-term goals. Indians’ ability to accumulate wealth took the biggest hit (41 percent), followed by their domestic and international travel plans (37 percent). Even the most important goal for many parents – saving for children’s education – took a hit, with close to one-third (29 percent) saying that providing for their children’s education was the most affected milestone. 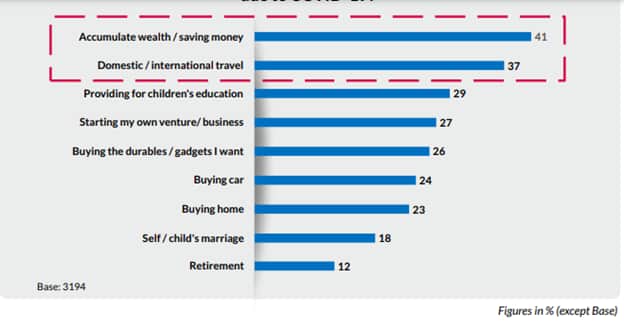 Expectedly, a whopping 60 percent of Indians reduced their discretionary spends, while 50 percent also had to dip into their emergency funds to meet their requirements. Around 44 percent had to focus on generating multiple sources of income and an equal proportion (43 percent) had to sell off their investments. Surprisingly, some (23-25 percent) let go of their life and health insurance policies despite the acute health crisis. 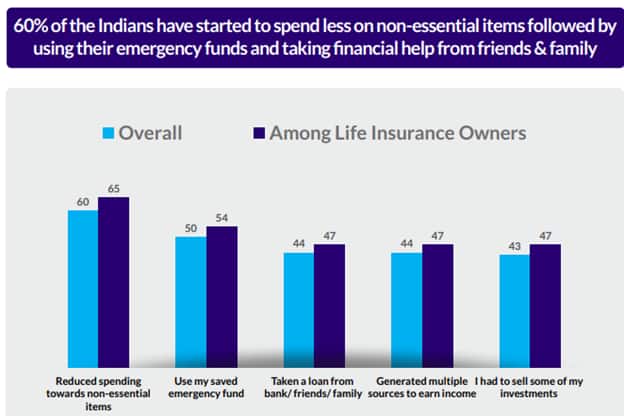 According to the study, Indians (57 percent) associate ‘financial immunity’ with their ability to ensure financial security and stability of themselves and their families. Earning income from multiple sources (48 percent) and having a secure job (43 percent) figure next in their lists. Fears of COVID-19 hospitalisation costs and risk of breadwinner’s death drove Indians to buy life and health insurance policies. According to the SBI Life study, 78 percent of respondents felt insurance is an extremely important part of the financial planning process. And, this attitude translated into actual purchases too – 44 percent of those polled bought life insurance policies for the first time and this figure was slightly higher, at 46 percent for health insurance. High on awareness, low on coverage

Despite the sharp rise in the level of awareness around insurance, a majority of the Indians remain under-insured, the survey noted. “Although Indians feel insurance is important, they seem to be under-insured with ~3.8 times the (life insurance) cover of their annual income which is below recommended 10X/25X of annual income,” the report said. Ideally, income, assets, liabilities, spouse’s income and family’s requirements should be taken into consideration while arriving at the ideal sum assured. However, a simple thumb rule is that your total life insurance cover should be at least ten times your annual income.

Preeti Kulkarni is a financial journalist with over 13 years of experience. Based in Mumbai, she covers the personal finance beat for Moneycontrol. She focusses primarily on insurance, banking, taxation and financial planning
Tags: #insurance #Life Insurance
first published: Jan 18, 2022 10:53 am