How you can profit from gilt funds’ fluctuating fortunes

Gilt funds have seen a sharp surge in flows over the past few months. In 2020 so far, gilt funds have got net inflows worth over Rs 9,000 crore. In the whole of 2019, only Rs 600 crore flowed in. Gilt funds have had a good run – these schemes delivered 9 per cent, on an average, so far this year as per Value Research. Are gilt funds suited for retail investors? A Moneycontrol study of gilt and bond fund returns over the past 15 years throws up one clear pointer. To make the most from gilt funds, you must remain invested for a tenure of at least six years.

Not for the short-sighted

Moneycontrol analysed gilt funds over the past 15 years, on a rolling returns basis. We looked at a series of one-year, three-year, five-year, six-year, seven-year and ten-year returns, with a monthly frequency. Our study shows that there is little chance of an investor making losses in gilt funds over a five-year tenure. If the investment is held for five years, the analysis shows that even in the worst market conditions, returns are likely to be flat or marginally negative.

To make meaningful returns from gilt funds, a six-year horizon is ideal. Of the 48 gilt funds considered, 30 gave a minimum return of six percent over any six-year period considered. 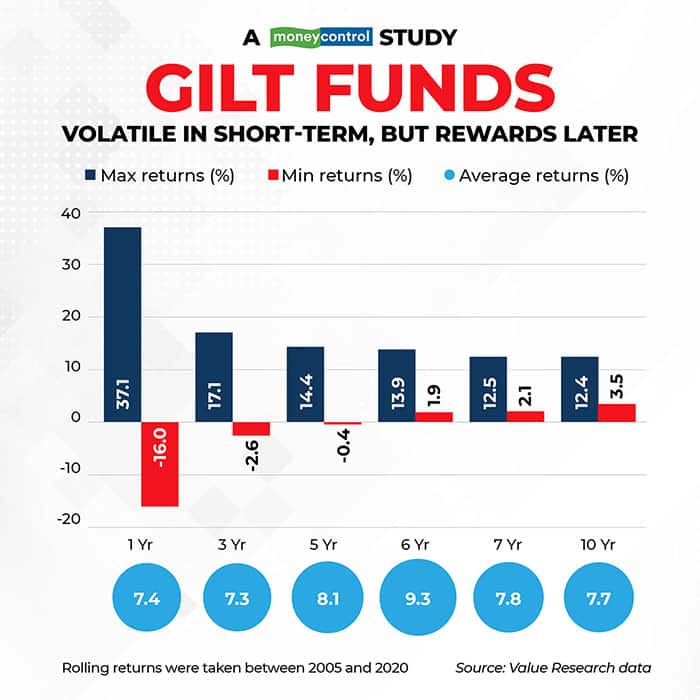 Gilt funds are more volatile than bond schemes, especially if you consider investing in them for shorter time frames. The worst return over all the one-year periods analysed was a loss of 16 percent recorded by a gilt fund, as opposed to 11 percent loss for a bond scheme. Returns of long duration and medium to long duration funds were considered for bond funds. "Investors tend to get attracted to gilt funds due to their recent return performance. However, data indicates that investors should not look at gilts funds with recency bias, but have a five to ten-year horizon," says Joydeep Sen, founder of wiseinvestor.in.

“Over the long-run, gilt funds have delivered returns. These funds have given more or less comparable returns vis-à-vis other duration products,” says Vikram Dalal, managing director of Synergee Capital Services. The tables show that as the tenure increases, the average return from a bond fund may rise, but the maximum and minimum returns from a gilt fund can be higher than those from bond schemes.

“However, unlike other debt products, gilt funds do not carry any credit risks,” he adds.

Why are gilt funds more volatile than the rest?

Gilts come with a sovereign guarantee. They are also most sought after securities, and therefore the most liquid. Not just g-sec funds, other debt schemes too buy and sell government securities. The increased liquidity also means that their prices fluctuate the most. “Gilt funds can be highly sensitive to the interest-rate cycle and yield fluctuations. So, if yields start to move up, it can weigh down the returns in gilt funds,” says Kaustubh Belapurkar, director (fund research), Morningstar.

He adds that a 50-basis point upward move in yields on a portfolio with a modified duration of six years, can translate into a negative impact of three per cent for a gilt fund.

Some gilt funds are also managed actively, depending on their managers’ interest rate views. A shorter average maturity can help curb downside if yields harden, but the same strategy can lead to underperformance if yields decline.

Ashish Chadha, a registered investment advisor says that gilt funds, especially those with constant ten-year maturity, look attractive right now. “However, if investors try to time these products or punt on them, they can be in serious trouble. An eight-ten year investment horizon is advisable for such schemes,” he says.

Is the party in g-sec funds over?

With the 10-year g-sec yield moving again up to nearly six percent, is the gilt funds party over? Marzban Irani, chief investment officer of LIC Mutual Fund, reckons that investors should avoid entering gilt funds when interest-rates are low. “One good way of evaluating the decision to enter a gilt fund is to keep in mind a range of six-eight per cent yield on the ten-year government securities (G-Secs). When yields move closer to the upper-end of this band, an investor can consider taking position in gilt funds,” Irani says.

In the current environment, most debt fund managers expect yields to remain range-bound. “The yields have already declined, and are expected to remain soft in the medium-term,” Irani points out. He adds that a retail investor buying gilt funds right now will most likely have to stay put for at least three years or more for reasonable returns.

If you do not wish to stay invested in gilt funds for long tenures, then Vinod Jain, principal advisor and founder of Jain Investment Planner has a suggestion. “Gilt funds are a good hedge against economy and equities, during times of heightened volatility and economic weakness, gilt funds have given outsized returns. Cases in the point are years 2000-03, 2008-09 and 2016. Entries are more important than exits, in gilt funds,” he says.