The acquisition of JP Morgan India mutual fund brought with it some quality equity schemes, many of which continue to perform well

A year ago, Edelweiss Mutual Fund entered an elite club: it ranked among the largest 15 mutual fund (MF) houses. Leading the Rs 64,449 crore fund house is Radhika Gupta who had never headed a fund house before this tenure. Often seen spending her days on social media spreading messages on the importance of the right investment advice, with a bit of niceties of Edelweiss MF thrown in every now and then, Gupta is out there in the sun. But is Edelweiss mutual fund all talk or does it have the goods to back her up?

Before Gupta took over as the fund house’s CEO, Edelweiss led a niche existence, changed its positioning quite a few times and had focused largely on the institutional segment. Gupta decided to bring the fund house to the mainstream – the retail investor’s doorstep. 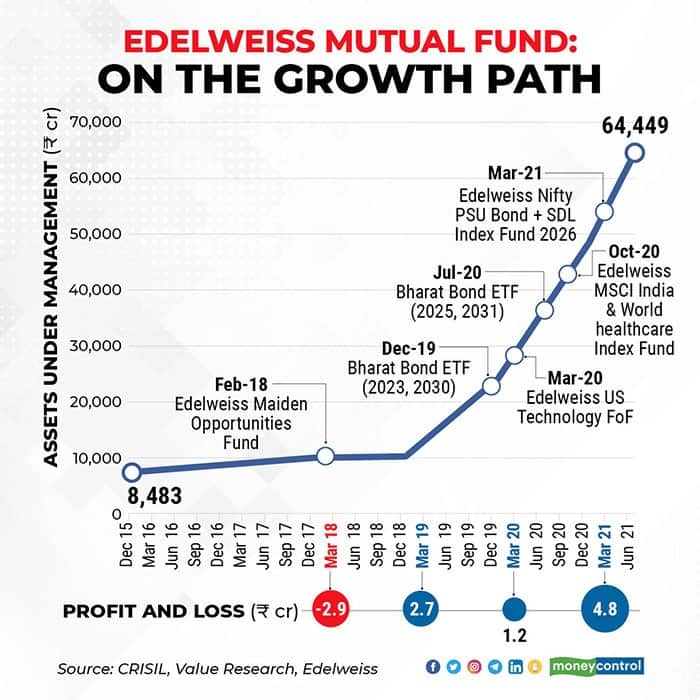 Its acquisition of JP Morgan India mutual fund brought with it some quality equity schemes, many of which continue to perform well. Still, back then, Edelweiss was 23rd in the league table of India’s mutual fund houses, with assets of less than Rs 9,000 crore. Gupta and her team devised a plan to target the sophisticated investor as well. The idea was to differentiate from the bigger competitors.

Edelweiss changed its absolute return fund to a balanced advantage scheme. It re-focused the arbitrage fund, and started offering JP Morgan’s international schemes to Indian investors through feeder funds. Over time, it has offered a variety of international funds that invest monies in the greater China region (China, Hong Kong and Taiwan), US technology companies, emerging markets and other themes. Most did well in the last two years on the back of surging global equity markets.

The missing debt funds pie was a challenge to Edelweiss. It hit the jackpot in 2019 when it decided to bid for Bharat Bond, India’s first CPSE (Central Public Sector Enterprises) ETF (exchange-trade fund). The fund was conceived to help CPSEs raise money in bond markets, which are usually highly illiquid. Edelweiss collected Rs 12,000 crore in its two plans that would mature in 2023 and 2030. Six months later, another two plans were launched (to mature in 2025 and 2031) that mopped up another Rs 11,000 crore. The total program currently stands at close to 34,000 crore.

Another successful passive debt index fund (Edelweiss NIFTY PSU Bond Plus SDL Index Fund –2026) launch earlier this year, and Edelweiss was in the big league. Gupta realised that passive debt funds is a convenient way to build credibility for its debt funds’ bouquet. “It was a low cost way to get market share. At the moment, they are keener to launch passive debt funds,” says Amit Bivalkar, director at Sapient Wealth.

Growth at what cost?

But too many passive funds could also mean low revenues. Edelweiss’s biggest scheme and roughly 53 percent of the overall fund house’s size, Bharat Bond ETF with a cumulative size of Rs 33,936 crore, doesn’t bring in revenues; its expense ratio is 0.0005 percent. “If such a large scheme doesn’t make money for the fund house, then what is the point?” wonders the CEO of a mid-sized fund house, who did not want to be named.

Gupta has her reasons. Bharat Bond brings in goodwill for the fund house, she says. She says that she has observed the number of systematic investment plans (SIP) in Edelweiss equity funds go up, due to investors’ good experience in Bharat Bond ETF and as the Edelweiss name has become more familiar on account of its increased distributor outreach, says Gupta. “Launching Bharat Bond was a strategic call,” she says. The fund house turned profitable two years ago.

Edelweiss Balanced Advantage Fund (EBAF) is also frequently talked about. Earlier the risk levels of this scheme were akin to those of an MIP. In 2017, Edelweiss, under Gupta’s leadership, decided to ramp up the scheme’s risk levels and made it a BAF. Like most balanced advantage funds, it switches between equity and debt depending the markets. But unlike most BAFs that reduce their equity exposure when markets head north, EBAF goes with the flow. In other words, it relies on the momentum strategy: higher the equity markets, higher will be its equity allocation and vice versa. In the past one year, it has given 30 percent returns, among the best in the category.

But Deepak Chhabria, CEO and director, Axiom Financial Services, says EBAF is a misnomer. “A BAF’s concept is to reduce risks when equity markets rise. EBAF doesn’t do that,” he says. EBAF’s good performance is on the back of rising equity markets. But a BAF is meant for slightly risk-averse investors who are looking at steady returns, and not equity-type of returns. “In my opinion, EBAF is not a balanced advantage fund,” says Chhabria.

The future of Edelweiss

Most advisors and distributors that Moneycontrol spoke to say that they are more comfortable with its passive and international funds as they are differentiated products. Many of its equity schemes have done reasonably well, especially those that have come from JP Morgan. Harshad Patwardhan, who headed JP Morgan India’s equity funds, now helms Edelweiss MF’s equities segment. A Moneycontrol analysis of its equity schemes shows a lack of long-term consistency, unlike some of its closest rivals such as Mirae Asset India and Parag Parikh mutual fund.

For now though, Gupta is making all the right noises. But nothing works like consistent performance over a long period of time.

Kayezad E Adajania heads the personal finance bureau at Moneycontrol. He has been covering mutual funds and personal finance for the past two decades, having worked in Mint and Outlook Money magazine. Kayezad was the founding member of Mint’s personal finance team when it was set up in 2009.
Tags: #Edelweiss Mutual Fund #invest #Mutual Funds
first published: Jul 26, 2021 09:06 am