How India has adopted digital payments through 2020

While almost every payment mode suffered a fall during April and started picking up in the second half of the year, exception was RuPay cards for PoS transactions at offline merchants, which are still below pre-Covid numbers and UPI on the other end which grew strongly over the last few months.

If demonetisation gave the first push to digital payments adoption in the country back in 2016, COVID-19 has given it further fillip in 2020. While transactions fell in the middle of the year as consumption slipped, what has happened is it became popular among the masses. Even consumers comfortable with cash have started using digital payments for their regular needs, a much needed push to move India towards a less cash society.

A KPMG report released in August 2020 studying the impact of COVID-19 on digital payments highlighted that going forward card payments will rise significantly mainly driven by contactless transactions. Further mobile wallets, payment gateway transactions and online bill payments through BBPS will rise significantly. The report also predicted even QR code based payments will see a wider adoption with loss in business for PoS machines, which consumers might continue to avoid as physical footfalls also continue to be low because of fear of the virus.

Further the RBI's report on Trends and Progress in Indian Banking for 2019-20 highlighted how COVID-19 has accelerated the adoption of digital payments as consumers preferred to stay away from cash.

So Moneycontrol looked at data from NPCI, which is the umbrella body for retail digital payments in the country and tried to highlight how the transactions dropped in the middle of the year and picked up towards October. NACH stands for National Automated Clearing House. This is a payment mode where consumers give a mandate for recurring transactions which get authenticated by NPCI. As per figures shared from last year, NACH transactions have remained steady throughout the year, with a sudden jump being reported in April. This was driven by a government sponsored benefit scheme, where poor citizens were given monthly support by the government during the lockdown months. Post that bump, NACH continued to show a steady level through the year. 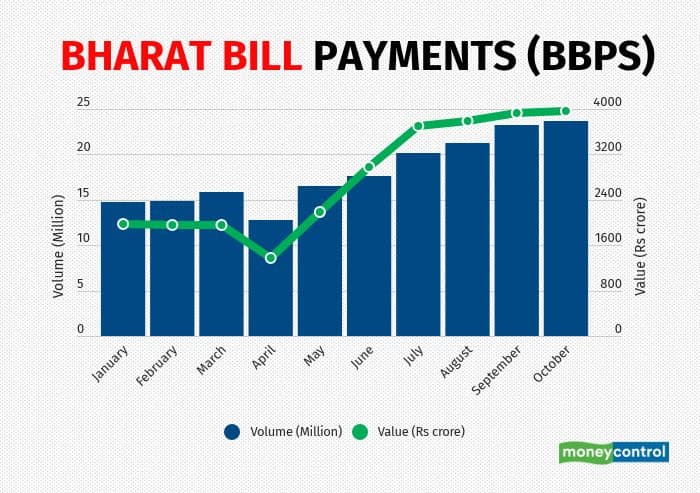 Bharat Bill Payments or BBPS has been a silent beneficiary of the pandemic. With consumers staying at home and avoiding crowded places, many started making bill payments online. Multiple industry insiders also pointed out that they have reported a massive surge in bill payments. Players like Paytm, Google Pay, Amazon Pay and PhonePe have benefited from online bill payments. The numbers also reflect a similar trend. If January saw around 15million bill payments being done monthly, for October the number jumped 58 percent to 23.7 million with almost Rs4000 crore being paid digitally. Also the amount of bill paid digitally has jumped two times in the same time period. RuPay is an NPCI run card scheme which competes with Visa, Mastercard and American Express. While in terms of number of transactions and value of transactions, the Indian card scheme is smaller than the global players, its trends continue to be indicative of the broader consumption patterns in the country. PoS transactions are reflective of offline merchant payments, which suffered a massive blow during the lockdown months. Shops were closed, restaurants were shut, hence card transactions at physical outlets crashed. In April, the number of transactions fell 64 percent between April and March. April was the worst month in terms of imposition of a strict lockdown. While there was a slow recovery post that as shops had started to open, at least as of October the numbers are still 84 percent of the pre-COVID-19 transactions. What is interesting here is that card transactions online continued its momentum even as the country went into a lockdown. Ecommerce transactions on RuPay cards did not grow aggressively, but at the same time it did not fall drastically as well. Somehow RuPay card usage for online transactions continued to hold the 60million level throughout the year. In the festive October months, the amount of money paid through RuPay cards did manage to reach Rs 8,753 crore, up 55 percent from Rs 5644 crore in the beginning of the year. A major indicator of resumption of economic activity in the country was Fastag payments or automated toll payments, which have been deployed across all national highways in the country. In February, NPCI reported 110million toll transactions which dropped to 84 million March and a mere 10 million in April, the month when interstate goods movement was heavily affected. While May saw some bit of resumption, it was only in September that fastag payments attained its pre COVID-19 levels. In October with highway traffic almost becoming normal, there were 122 million transactions reported with Rs 2,137 crore being collected as toll payments. 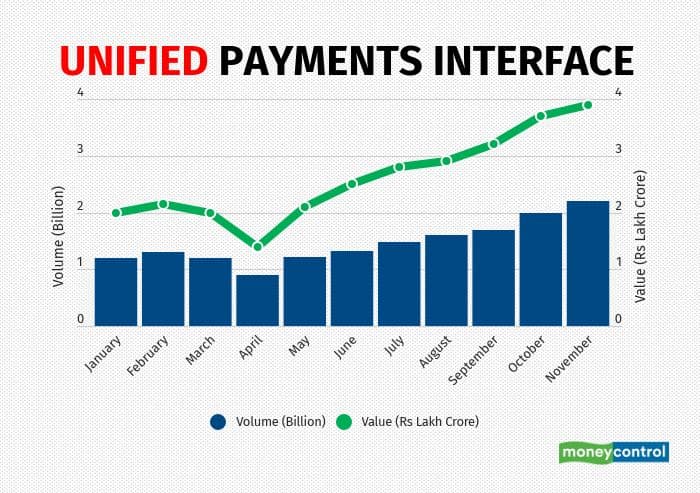 While every other payment mode has gone through its up and down during the year, Unified Payments Interface saw its adoption growing multiple times. It has almost doubled in 2020 both in terms of volume and value. UPI saw its growth being driven by larger adoption of digital payments across categories, along with its usage in QR code based payments. Further the launch of UPI 2.0 has helped open up new use cases on the platform, even IPO payments are being done through UPI. So overall it has managed to catch the imagination of the nation and people are taking to UPI as a default P2P payment mode.
Pratik Bhakta
Tags: #digital payment #FASTag #Rupay #UPI
first published: Dec 30, 2020 12:11 pm