Flaws in credit rating: Why it is critical that you research well before investing in bonds

If the ‘borrower pays’ business model persists, the stated ratings will tend to be better than the real financial health of the rated company

The conventional credit rating business model has a fatal flaw at its heart – borrowers pay for the ratings. This exposes the credit rating process to subtle (and sometimes not so subtle) influences from the borrowers. Hence, modern-day credit ratings are routinely over-optimistic. This is often referred to as the ‘ratings drift.’

Not just a few big-name defaults

While defaults by AAA-rated companies grab the headlines, the phenomenon of ratings drift is not just about these failings of the rating agencies. It is about the general underestimation of credit risk of borrowers. Let us see how.

The implied probability of default at a one-year horizon for various credit ratings is as follows. 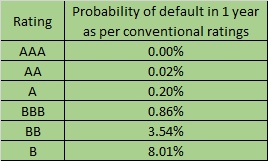 This would suggest that out of 10,000 companies rated AA, two may default over the next one year, while the same number is 86 for BBB-rated companies. This means the actual likelihood of default of a A-rated company is closer to five times the probability of default suggested by its credit rating – for 10,000 companies rated A, while the credit ratings suggested that only 20 may default in the next one year, in reality, close to 90 companies defaulted!

Another way of looking at it is that the real credit rating of the company is worse than what is awarded to it by credit rating agencies. In fact, the ratio of actual to expected frequency goes down to a more realistic 1.5 or so when one simply replaces each credit rating with its lower counterpart; i.e., A instead of AA and BBB instead of A etc.

The borrower-pays model for credit rating has been a curious feature of bond market evolution. In the early days of credit rating, the disclosed ratings quite accurately described the actual likelihood of default. However, two drivers caused the ratings to become over-optimistic.

Charlie Munger’s famous quote applies here – “Show me the incentive and I will show you the outcome.” Since borrowers are customers of rating agencies, the competition for the business amongst agencies will naturally drive their sales teams to compete on all possible fronts – not just pricing, but also the lure of giving a ‘good rating.’ This leads to the obvious phenomenon of rating shopping by borrowers – ‘give me a good rating or I will go to your competitor’ or more commonly ‘if you downgrade us, we may switch the rating agency for our next issuance.’

So long as this business model persists, the stated ratings will tend to be better than the real financial health of the rated company.

Dressing up for a good rating

There is a very interesting idea in economics named Goodhart’s law: “when a feature of the economy is picked as an indicator of the economy, then it inexorably ceases to function as that indicator because people start to game it.” We can apply it to credit assessment also. Since credit ratings are used in so many different contexts – pricing, trading, regulation and capital allocation – it is possible that they have become prone to manipulation.

This is also referred to as ‘window dressing.’ For example, since cash and bank balances at the end of the financial year are an important determinant of the liquidity position of a company, many companies try to prop up their cash holdings just for March 31. This phenomenon is so common that it pushes the yields of liquid mutual funds up for a few days around that date!

There are many other ways to window-dress, so that a company gets a better credit rating than it really deserves. The time-honoured methods of credit assessment are so well known to the companies being rated that being around for so long is increasingly a liability for a credit rating agency than an asset!

What does it mean for a retail investor?

If you are a direct investor in debt capital markets, i.e., corporate bonds or corporate fixed deposits, you need to start taking the credit rating with a pinch of salt. Instead of seeing just the rating of the current issue, it is useful to check the full rating history of a company – at least for the previous 3-5 years. Switching of rating agencies is potentially a red flag.

Finally, there is no substitute for some additional research about a company before making an investment. In such research, it helps to go beyond accounting ratios to look at cash flow statements, current assets, and quality of governance of the company. Benchmarking to peers in the same industry helps too.

Conventional credit ratings and the business model that produces them are both inherently limited in their ability to accurately gauge the creditworthiness of companies. It is best to rely on direct analysis of the borrower before investing your hard-earned money.

(The author is Founder, ASQI Advisors – a financial technology company)