Eight important money matters that need your attention this June

Interest rates on home and auto loans will rise after the Reserve Bank of India (RBI) increased the repo rate in May. Some banks had announced rate hikes immediately after the RBI’s decision, while several public sector and private banks will increase their interest rates on loans effectively from June. Third-party motor insurance premiums are set to increase and bank tariffs are being changed. Here are some key regulatory and operational changes that are likely to affect your financial life from June.

Effective June 1, State Bank of India’s (SBI) external benchmark lending rate (EBLR) on home loans will increase to 7.05 percent from 6.65 percent. The bank’s repo-linked lending rate (RLLR) will rise to 6.65 per cent from 6.25 per cent. SBI adds a credit risk premium over the EBLR and RLLR while sanctioning home loans.

The decisions follow the 40 basis point repo rate hike in the first week of May. One basis point is one-hundredth of a percentage point.

Car and bike owners will pay higher third-party insurance premiums from June 1, as set by the ministry of road transport and highways and the Insurance Regulatory and Development Authority of India for FY23. 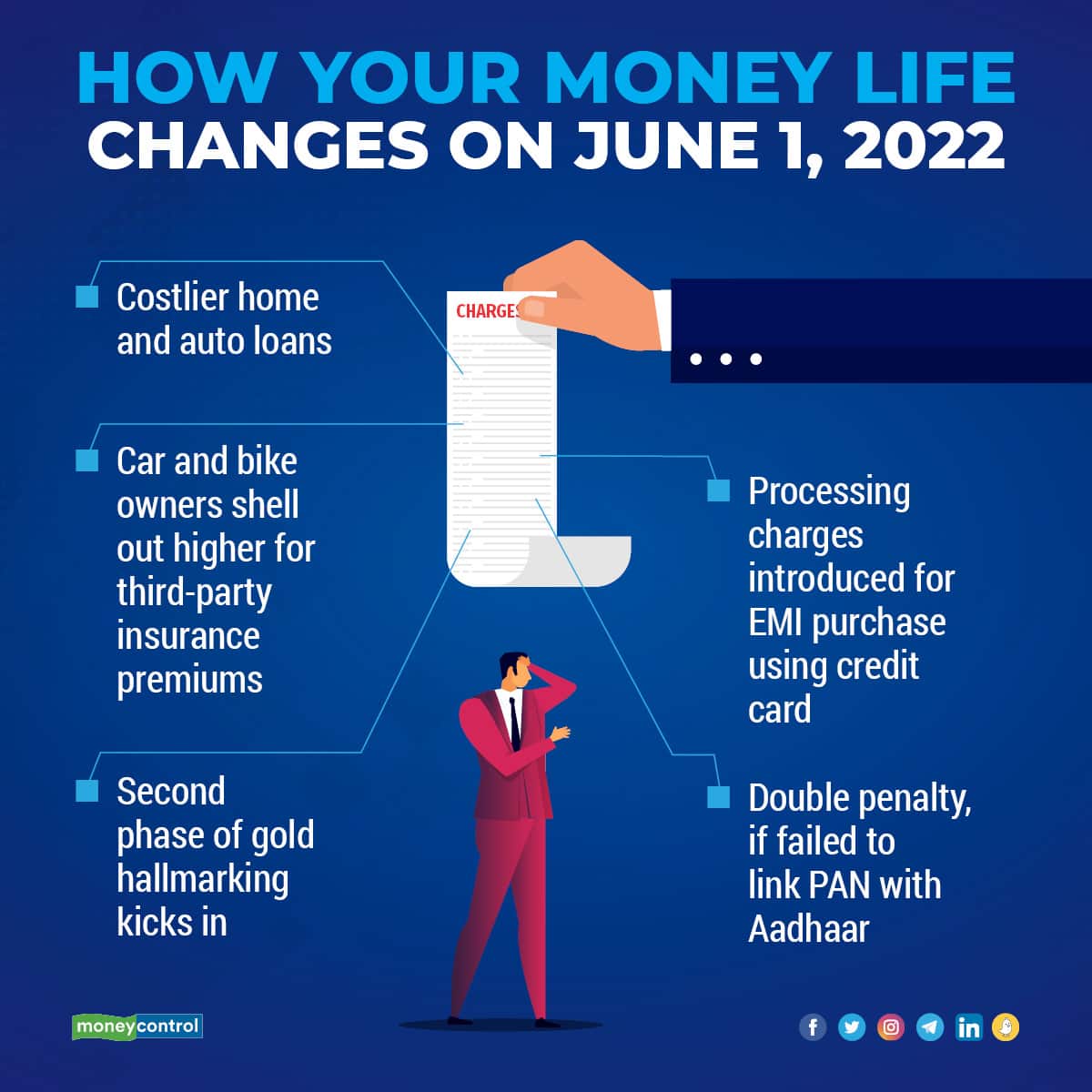 American Express credit card holders will have to shell out additional charges for converting a purchase into an equated monthly instalment (EMI) transaction. Effective June 1, point-of-sale EMI transactions will attract a processing fee of Rs 99 plus taxes. These charges will apply for online or in-person transactions. For post-purchase EMI requests, a time processing fee of 2 per cent plus taxes will continue to be charged. An interest rate of 14 percent per annum will be charged for converting large purchases into EMIs.

Jewellers must sell only hallmarked gold jewellery and artefacts (above 2 grams) from June 1, when the second phase of hallmarking kicks in. Earlier, only 14K, 18K and 22K jewellery was hallmarked. More districts have been added with the setting up for additional testing laboratories. Hallmarking is mandatory for all registered jewellers in 288 districts. Jadau, Kundan and Polki necklaces have been exempted from the hallmarking requirement.

Effective June 15, India Post Payments Bank will introduce charges for Aadhaar Enabled Payments (AePS). Every month, the first three AePS transactions will be free, including cash withdrawals, cash deposits and mini-statements. Every subsequent cash withdrawal or deposit will cost Rs 20 plus GST. The charge for every mini-statement request will be Rs 5 plus GST.

Double penalty for failure to link PAN with Aadhaar

The Central Board of Direct Taxes has imposed a fine for missing the March deadline to link the permanent account number (PAN) with Aadhaar. The fine is Rs 500 if PAN and Aadhaar are not linked by June 30 and Rs 1,000 thereafter. June is the last month to link PAN with Aadhaar and save on paying double the penalty.
Moneycontrol PF Team
Tags: #Aadhaar #banking #Gold #insurance #personal finance
first published: Jun 1, 2022 08:25 am