DSP Midcap Fund has put its house in order after a rough patch. But the scheme’s large size of over Rs 8,000 crore can be a hindrance to good performance

At a corpus size of close to Rs 8,500 crore as of October 2020, DSP Midcap fund (DMF) is the largest equity scheme for DSP Mutual. The scheme was launched in November 2006. Having gone through its fair share of ups and downs, DMF appears to have come to stage where it generally delivers stable returns. Its stock and sector preferences too appear to have become more consistent.

What is DSP Midcap all about?

Vinit Sambre manages this fund. He is also the Head-Equities at DSP Investment Managers. The fund invests in companies that work in businesses with potential, where the fund manager sees a growth potential in Return on Equity (among other factors) in the foreseeable future. Clean managements appeal to Vinit; he avoids companies that have seen too many related party transactions and also those with complex shareholding structures, with many subsidiaries or associate companies. Vinit also invests in companies that pay taxes (at least 20 percent). “We have seen, as far back as in the technology bubble of the year 2000 where companies used to dress up their profit and loss accounts, show a profit and change their names to sound like a technology company. But the important thing is that if a company pays taxes, among other things, it doesn’t generate fake profits,” says Vinit.

The fund also avoids companies that are into too many businesses. For a mid-cap fund, the quality of management is far more important as these companies aren’t typically tracked by many analysts. Many may not have been around for several years and information is not easily available as compared to larger, well-established companies.

After a rough patch in 2013 and 2014, the scheme has stabilised. During that time, the fund used to churn its portfolio frequently and took some bad calls. Its fund manager back then had mistimed India’s growth story and had taken exposures in industrial capital goods and construction sectors. The scheme has given returns of 1.7 percent and 70.5 percent returns in 2013 and 2014 respectively, and had figured in the bottom quintile performance of mid-cap funds, as per ACE MF data. In 2014, the average return by top quintile mid-cap funds was 84 percent. 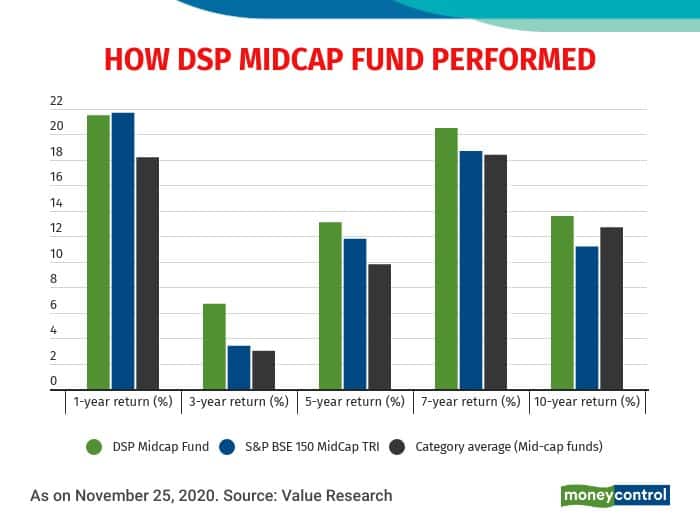 But DMF has become more process-oriented in the last few years. In the years 2018 and 2019, the scheme gave top quintile performance. Even if you take its rolling return (a series of three-year and five-year returns), the scheme is among the top three in a category that has 27 funds.

The scheme follows a bottom-up portfolio approach. Although all mutual fund schemes are mandated to have a benchmark index, Vinit doesn’t follow the benchmark for this scheme closely. Its top sector allocations are to financials (18 percent), chemicals (15 percent) and healthcare (14 percent). Being a mid-cap fund, the largest banks, both in private and public sector, are out of bounds. But DMF has invested in non-banking financial companies such as Manappuram Finance, Cholamandalam Investment & Finance as well as insurance firms such as Max Financial Services and SBI Life Insurance Company. The fund also uses market falls to buy stocks and builds its positions for better times ahead. Some of his top holdings today – Ipca Laboratories, SRF, Alembic pharmaceuticals and Ramco Cements – were bought around a couple of years back during the fall in the mid-cap segment. “We prefer to buy in falling markets but we also then patiently sit through the cycle and wait till the stories in these companies play out. One of the surest ways to make money is to buy during bad cycles, because in good cycles everyone buys and that pushes the share prices up quickly,” says Vinit.

DMF doesn’t churn its portfolio much. Its portfolio turnover is under 20 percent, as per ACE MF data. Cash position is maintained at under 10 percent at all times for liquidity purposes. The scheme is well-diversified; it holds about 45 stocks and has consolidated its portfolio this year. Its tail – number of stocks accounting for less than a percent of the overcall corpus – is also small with just 11 such companies as per its September-end portfolio. That’s impressive, given the fund’s large size.

But the large size is also a concern. Typically, experts recommend smaller mid-cap funds as, in rising markets, these schemes not only get large inflows, their NAVs and therefore their corpus sizes also grow faster. And a large-sized mid-cap fund can get sluggish due to the illiquid nature of the mid and small-cap segments.